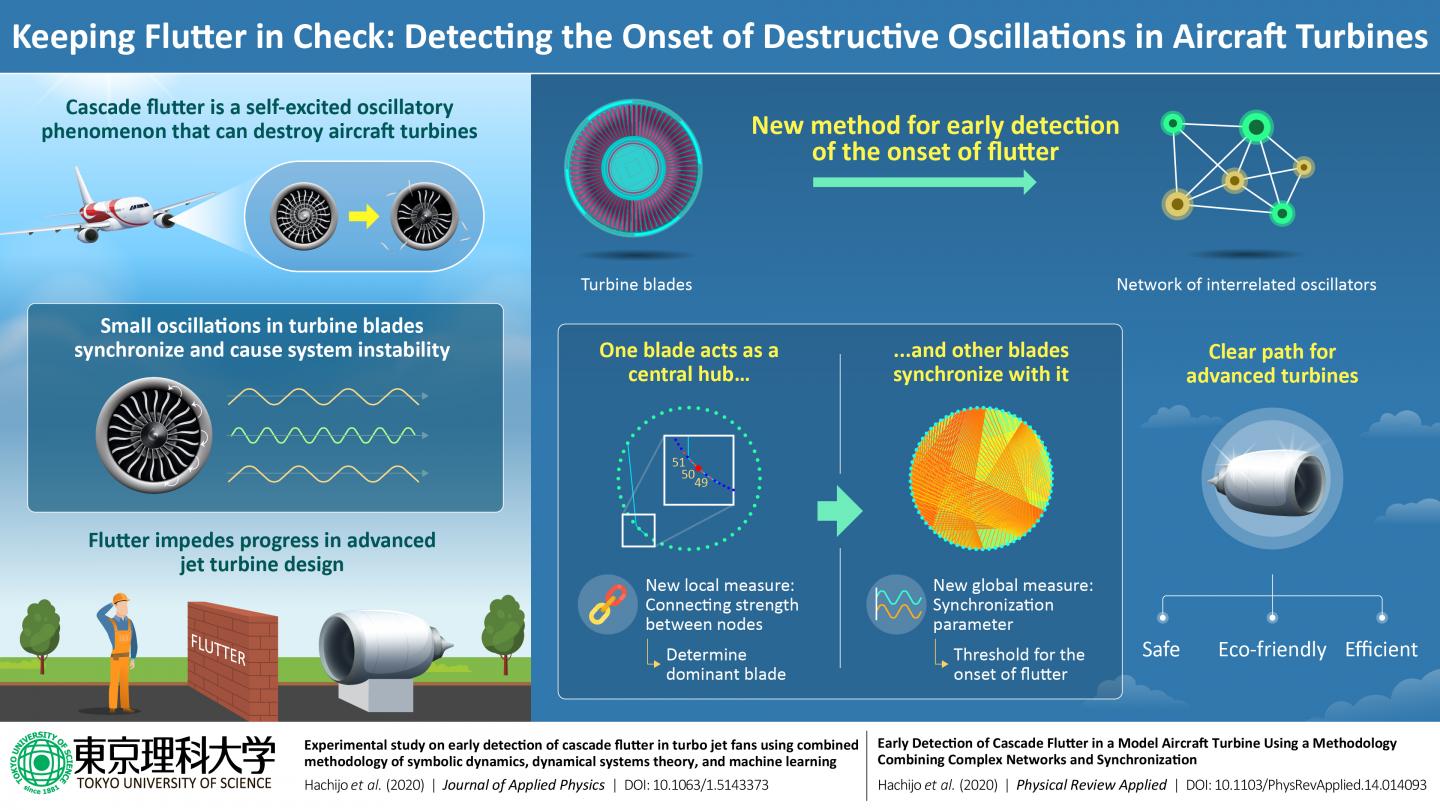 IMAGE: The efforts of the research team from TUS and JAXA for early flutter detection in aircraft turbines would help the development of safer and more eco-friendly turbine designs.

Despite humanity's remarkable engineering prowess, sometimes completely unexpected or poorly understood physical phenomena can rapidly lead to catastrophic failures. Such was the case in Braniff International Airways Flight 542 in 1959 and Northwest Orient Airlines Flight 710 in 1960, where both aircrafts spontaneously disintegrated in mid-air due to a mechanical phenomenon known as "flutter."

In aerospace research, flutter generally refers to undesired and self-sustained vibrations in turbine blades that can readily grow out of control, destroying them along with the engine, and even the aircraft's wings. It is not very surprising that flutter remains an area of active research and one of the main concerns when designing turbines. In fact, flutter has been placed once again under the spotlight in a project (advanced-fan-jet-research: aFJR) launched by the Japan Aerospace Exploration Agency (JAXA) aimed at designing highly efficient and environment-friendly turbines.

In a new study published in Physical Review Applied, scientists from the Tokyo University of Science (TUS), in collaboration with researchers from JAXA, tackle the problem of developing a novel methodology for early detection of flutter in the design state of blades. Dr. Hiroshi Gotoda (corresponding author of the paper) from the Department of Mechanical Engineering at TUS explains the problem at hand and how they tried to solve it, "The onset of cascade flutter has impeded the technological development of advanced jet engines and its early detection is a long-standing problem in current aerospace propulsion engineering. Our main aim was to explore the applicability of a methodology combining complex networks and synchronization to detect a precursor of cascade flutter."

The main idea behind their approach is that the turbine fan can be mathematically modeled as a complex network of interrelated oscillators and that flutter is ultimately the result of the progressive synchronization of more and more blades as a result of increased airflow going through the turbine. In another study, published in the Journal of Applied Physics, the same group had explored an artificial intelligence-based method for detecting the onset of flutter from time-series data using the permutation entropy of the system, which is a measure of the randomness of the turbine's complex dynamics. In their current work, they demonstrate that a network representation of the system based on synchronization is closely related to the actual oscillatory behavior of the blades.

Through experiments on an actual turbine test rig conducted at JAXA's Altitude Test Facility, the research team found that, before the onset of flutter, one particular blade begins to act as a "central hub" in the network and adjacent blades start to oscillate in sync with it. This "local" synchronization quickly expands and leads to the collective synchronization of all blades, resulting in potentially catastrophic "flutter."

In this context, the network representation of the system proposed in this study serves two important purposes, as explained by Dr. Gotoda, "We demonstrate the applicability of two local and global measures as potential detectors of cascade flutter: the connecting strength between individual network nodes and the network's synchronization parameter. The former is valid for specifying the dominant blades for the onset of cascade flutter. In contrast, the latter, which ranges from 0 to 1, is more suitable for determining a threshold for this onset."

The combined findings of these new studies shed light on the complex phenomenon of flutter, and contribute to the academic systemization of nonlinear problems in the field of aeronautical engineering and related nonlinear science. They could represent promising techniques for the early detection of flutter onset in the design state of blades. The efforts of this research team from TUS and JAXA would help the development of safer and more eco-friendly turbine designs.