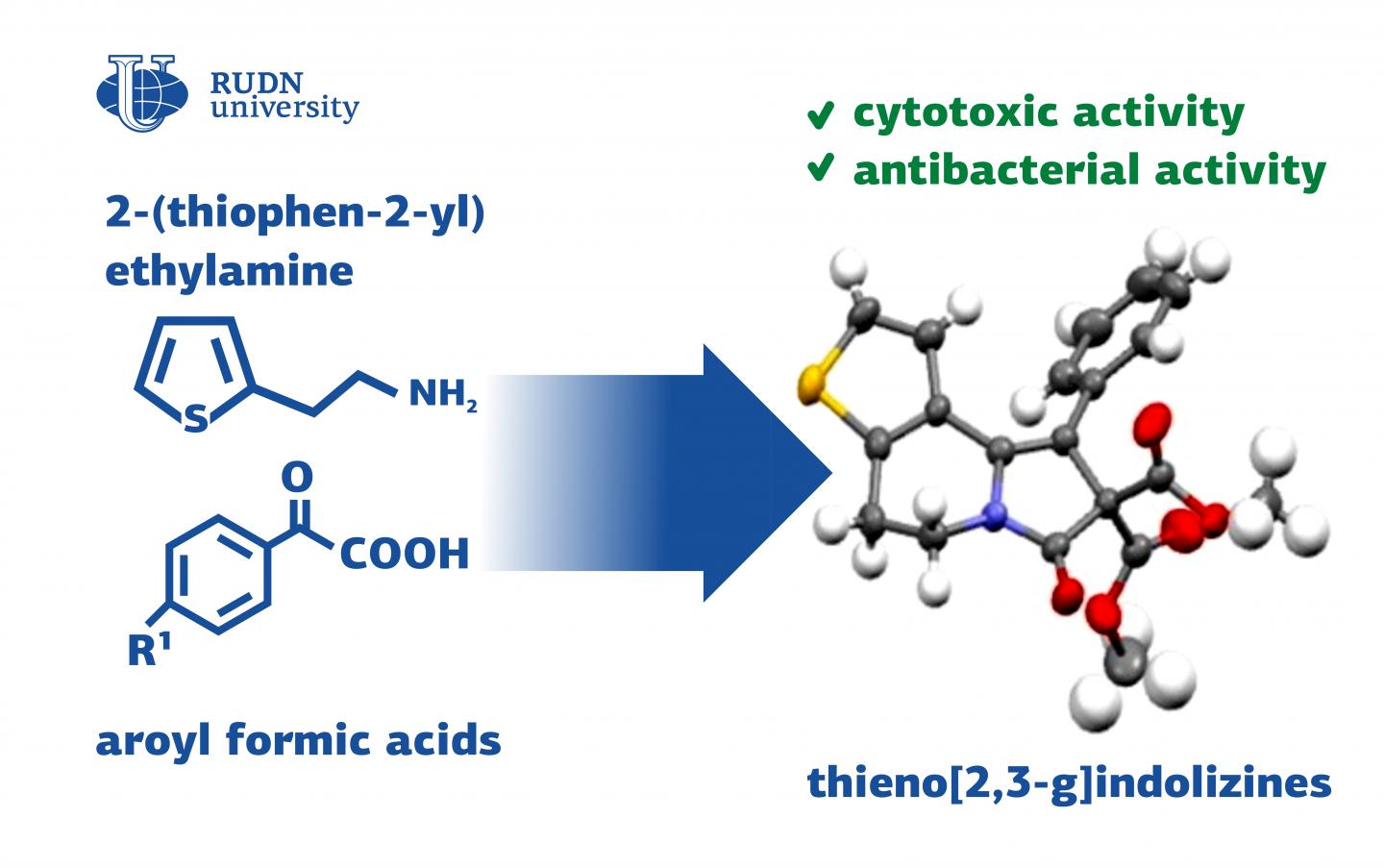 image: A team of chemists from RUDN University suggested a universal method to synthesize thienoindolizine derivatives. Because of their special properties, these substances can be used to manufacture antibacterial and antitumor drugs, as well as new materials for optoelectronics.

A team of chemists from RUDN University suggested a universal method to synthesize thienoindolizine derivatives. Because of their special properties, these substances can be used to manufacture antibacterial and antitumor drugs, as well as new materials for optoelectronics. The results of the study were published in the Chemistry Select journal.

Thienoindolizines are tricyclic compounds containing sulfur and nitrogen heteroatoms. Thienoindolizines are combinations of two structural elements: thiophene and indolizine. Both these substances have many important biological characteristics, such as antitumor and antibacterial properties. Thienoindolizines are used not only in biomedicine but also in optoelectronics to create new materials. However, the existing synthesis methods work only for a small group of initial substances and are unable to secure the presence of any functional atom groups in the product. A team of chemists from RUDN University was the first to suggest a universal approach to the synthesis of thienoindolizines based on two- and three-component thienopyridine reactions.

"Currently, there are no universal methods for the synthesis of thienoindolizine derivatives that would not only form the framework of a compound but also allow for the addition of different functional substituents. Therefore, researchers focus on affordable and mild approaches to the creation of thienoindolizine structures from simple precursors," explained Alexander Titov, PhD, and a senior lecturer at the Department of Organic Chemistry, RUDN University.

The team based the synthesis reaction on compounds from the group of heterocycles with sulfur and nitrogen atoms - thienopyridine derivatives. For them to turn into thienoindolizines, they required one more cycle and several functional groups to be added to them. The scientists studied the reactions of thienopyridine derivatives with substances from six different groups: alkynes, aldehydes, alcohols, and other organic compounds.

The RUDN team tried different reaction conditions for different reagents: microwave radiation, inert atmosphere, solvents, catalysts, different temperatures within the 140-150°C range, and different reaction times--from 10 minutes to several hours. As a result, they managed to obtain 28 thienoindolizine derivatives. For some of them, the team identified optimal synthesis conditions that ensured a high yield of 70% or more. Without the catalysts and proper conditions, the yield remained at the level of 10-20%.

Seven of the obtained compounds were tested for their ability to kill tumor cells or cytotoxicity. Compared to existing chemotherapy drugs, the activity of these substances was insignificant. However, three of them had cytotoxic properties and required further research. The study of the antibacterial activity of the obtained compounds led to similar results: one out of six tested substances turned out to be efficient against hay bacillus and Candida fungi.

"The synthetic and biological aspects of thienoindolizines remain largely understudied. We believe that a combination of two biologically active substances in one molecule must have its advantages. We will continue to develop new methods to synthesize these substances and control their characteristics. In the future, we expect to develop a family of heterocyclic compounds with known antitumor, antibacterial, and painkilling properties," added Alexander Titov, PhD, and a senior lecturer at the Department of Organic Chemistry, RUDN University.