But when Yin and the paper's three lead authors, Ryosuke Iinuma, a former Wyss Institute Visiting Fellow, Yonggang Ke, Ph.D., a former Wyss Postdoctoral Fellow who is now an Assistant Professor of Biomedical Engineering at Georgia Institute of Technology and Emory University, and Ralf Jungman, Ph.D, a Wyss Postdoctoral Fellow, built bigger tripods and tried to assemble them into polyhedra, the large tripods' legs would splay and wobble, which kept them from making polyhedra at all.

The researchers got around that problem by building in a horizontal strut to stabilize each pair of legs, just as a furniture maker would use a piece of wood to bridge legs of a wobbly chair.

To glue the tripod legs together end-to-end, they took advantage of the fact that matching DNA strands pair up and adhere to each other. They left a tag of DNA hanging off a tripod leg, and a matching tag on the leg of a different tripod that they wanted it to pair with.

The team programmed DNA to fold into sturdy tripods 60 times larger than previous DNA tripod-like building blocks and 400 times larger than DNA bricks. Those tripods then self-assembled into a specific type of three-dimensional polyhedron -- all in a single test tube.

By adjusting the length of the strut, they built tripods that ranged from upright to splay-legged. More upright tripods formed polyhedra with fewer faces and sharper angles, such as a tetrahedron, which has four triangular faces. More splay-legged tripods formed polyhedra with more faces, such as a hexagonal prism, which is shaped like a wheel of cheese and has eight faces, including its top and bottom.

In all, they created five polyhedra: a tetrahedron, a triangular prism, a cube, a pentagonal prism, and a hexagonal prism.

After building the cages, the scientists visualized them using a DNA-based microscopy method Jungmann had helped developed called DNA-PAINT. In DNA-PAINT, short strands of modified DNA cause points on a structure to blink, and data from the blinking images reveal structures too small to be seen with a conventional light microscope. DNA-PAINT produced ultrasharp snapshots of the researchers' DNA cages – the first 3D snapshots ever of single DNA structures in their native, watery environment. 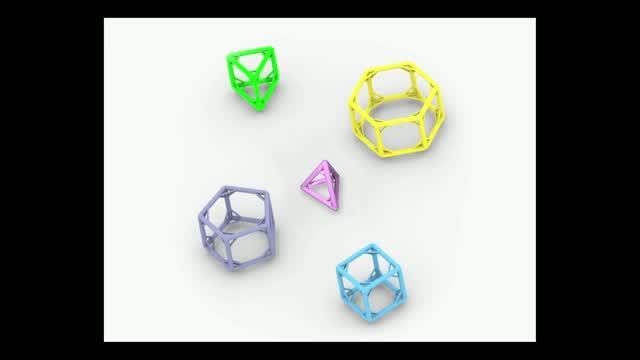 To create supersharp images of their cage-shaped DNA polyhedral, the scientists used DNA-PAINT, a microscopy method that uses short strands of DNA (yellow) labeled with a fluorescent chemical (green) to bind and release partner strands on polyhedra corners, causing them to blink. The blinking corners reveal the shape of structures far too small to be seen with a conventional light microscope.

The five cage-shaped DNA polyhedra here have struts stabilizing their legs, and this innovation allowed a Wyss Institute team to build by far the largest and sturdiest DNA cages yet. The largest, a hexagonal prism (right), is one-tenth the size of an average bacterium.