The right cells in the right spot 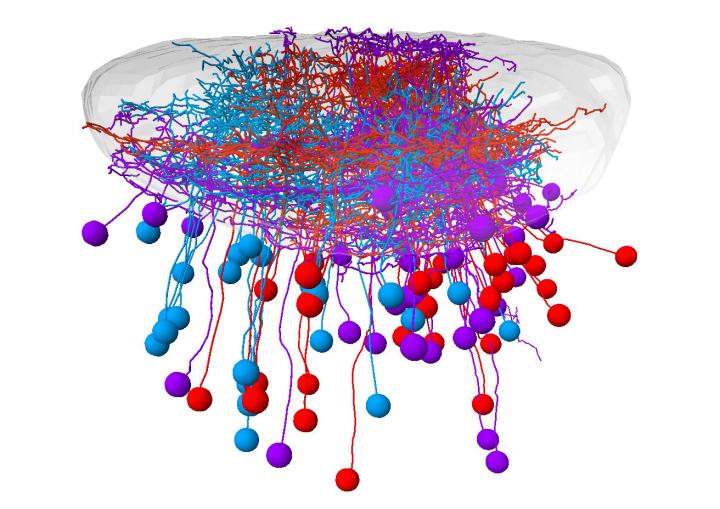 IMAGE: Visually responsive neurons in zebrafish are arranged in a map that serves to efficiently catch prey.

Spotting, pursuing and catching prey - for many animals this is an essential task for survival. Scientists at the Max Planck Institute of Neurobiology now show in zebrafish that the localization of neurons in the midbrain is adapted to a successful hunting sequence.

Far away, in the periphery of its visual field, a tiny zebrafish larva detects a small dot moving sideways. Is it prey or is it a threat, for instance, a distant predator sneaking up on it? Within the shortest possible time, the fish decides that it must be potential prey. The larva turns toward the object, approaches it, until it is right in front, and snaps shut - one of its daily hunting routines is successfully finished.

What might sound straightforward, is actually a highly complex process. Many different visual stimuli are detected simultaneously, transferred from the eye to the brain, and further processed. Interestingly, the stimuli don't reach the brain at random locations: every position on the retina is transmitted to a very specific location in the tectum of the midbrain, the processing hub for visual stimuli. However, apart from that, there is not much knowledge of how the neurons are wired and organized, or which signals they specifically react to.

Dominique Förster and a team from Herwig Baier's laboratory analyzed how retinal ganglion cells transfer visual information from the eye to the tectum and how this input is further processed. To do so, zebrafish larvae were presented in a virtual reality area with different visual stimuli, ranging from small and big prey-like objects to approaching threats similar to predatory fish. Using a special microscopy technique, the researchers not only analyzed the activity of hundreds of neurons in parallel, but also the location of their cellular projections.

Analyzing this pool of data showed that retinal ganglion cells as well as neurons in the tectum respond to optical stimuli in a highly specialized manner: While some cells are activated by small objects, others react to bigger objects, or even threats. Some cells are interested in the direction of motion, others only in whether the environment gets darker or brighter. Interestingly, the special-purpose neurons do not distribute randomly in the tectum. Retinal ganglion cells reacting to threats send their projections into deep tectal layers, where they meet the receiving processes, or dendrites, of tectal neurons. In contrast, cells responding to prey-like objects make synaptic connections in more superficial layers. This specialization of different tectal layers most likely allows zebrafish to quickly distinguish between prey and threat - an essential skill for survival.

The researchers then discovered that the prey-specific cells of the upper layers are arranged in a way that is advantageous for the hunting sequence: prey usually appears first at a distance in the peripheral visual field. Such images are represented in the back part of the tectum. Strikingly, this region of the tectum is enriched with cells reacting to small moving objects. When the fish turns toward the prey and approaches it, the prey's image moves to the front part of the tectum and gets bigger, until it appears directly in front of the fish. There it is held steady by the fish's own movement, until the prey can be captured by a vigorous strike. Neurons tuned to visual input with these characteristics, that is, large and steady, sit in the frontal region of the tectum - exactly where this kind of information reaches the brain.

This study shows that the arrangement and connectivity of neurons in the tectal brain map is adapted to the demands of hunting. Specialized cells localize to brain regions where their function is best suited for an efficient catch. By using the hunting behavior of zebrafish as an example, the researchers were able to demonstrate the impact of natural selection on the layout of relevant brain regions. These results remind us that the way animals (including us) perceive the world is shaped by evolution. The way the brain is wired has worked best to ensure survival in the past.