People infected with the Human Immunodeficiency Virus (HIV) can stave off the symptoms of AIDS thanks to drug cocktails that mainly target three enzymes produced by the virus, but resistant strains pop up periodically that threaten to thwart these drug combos.

Researchers at the University of California, Berkeley, and the National Institutes of Health have instead focused on a fourth protein, Nef, that hijacks host proteins and is essential to HIV's lethality. The researchers have captured a high-resolution snapshot of Nef bound with a main host protein, and discovered a portion of the host protein that will make a promising target for the next-generation of anti-HIV drugs. By blocking the part of a key host protein to which Nef binds, it may be possible to slow or stop HIV.

"We have imaged the molecular details for the first time," said structural biologist James H. Hurley, UC Berkeley professor of molecular and cell biology. "Having these details in hand puts us in striking distance of designing drugs to block the binding site and, in doing so, block HIV infectivity."

Hurley, cell biologist Juan Bonifacino of the Eunice Kennedy Shriver National Institute of Child Health and Human Development (NICHD) of the National Institutes of Health and their colleagues report their findings in a paper published Jan. 28 by the open-access, online journal eLife.

The report comes a month after President Barack Obama pledged to redirect $100 million in the NIH budget to accelerate development of a cure for AIDS, though therapies to halt the symptoms of AIDS will remain necessary for the immediate future, Bonifacino said.

"For many patients, current drug therapies have transformed HIV infection into a chronic condition that doesn't lead to AIDS, but anything we can develop to further interfere with replication and propagation of the virus would help keep it in check until we find a way to completely eliminate the virus from the body," he said.

HIV contains a small number of genes that produce only 15 different proteins, all of which hijack some aspect of immune cells' internal machinery to produce more copies of the virus.

Current anti-AIDS drugs block three HIV enzymes – proteins that transcribe and insert the virus' genetic material, and snip some of the encoded proteins – but researchers are now looking for drugs that target the other proteins as backups to current therapies. In particular, they are searching for ways to block sites on host proteins to which the virus proteins bind in order to stop HIV. This has to be done without interfering with normal cell function, however. 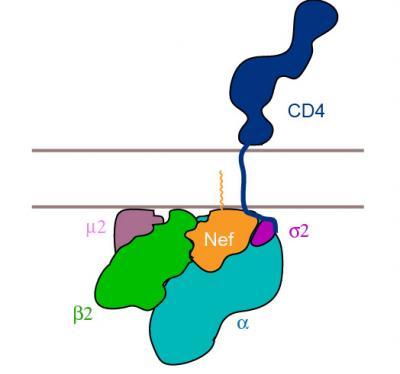 The AIDS virus enters immune cells by binding to CD4 receptors embedded in the membrane (parallel lines) of the cell. But once a virus enters the cell, it makes a protein, Nef, that binds to the protein complex underlying CD4, tagging it for the waste bin. Potential anti-HIV drugs would disable one of the proteins (colored blobs) to which Nef binds, interfering with HIV's strategy for spreading through the body.

Nearly 20 years ago, scientists showed that without the protein Nef – short for negative factor – HIV is far less infective. Some patients can live for decades without problems if infected with a Nef-defective virus.

Since then, more details have emerged about Nef's role. HIV enters immune system cells via a receptor called CD4, but once "HIV gets into cells through the CD4 door, it slams the door shut behind itself to prevent unproductive re-infection," Hurley said.

Scientists aren't sure why HIV slams the door on other viruses, he said, though it may be a way to prevent too many viruses entering the same cell, making the cellular environment less favorable for productive viral replication.

Whatever the reason, the virus prevents further HIV infection by ridding the cell surface of all other CD4 receptors. Nef achieves this by tagging the CD4 receptor so that the cell thinks it is trash and carries it to the cell's incinerator, the lysosome, where it is destroyed. Six years ago, Bonifacino and colleagues found that Nef does this by directly binding to a host protein, AP2, that latches onto a protein called clathrin. This causes the cell membrane to bulge inward and pinch off to form a small membrane bubble that carries attached CD4 receptors to the lysosome for destruction.

"The new high-resolution image reveals a cavity at the site where Nef binds to AP2, that could be a good site for drug targeting," Bonifacino said.

"This cavity on AP2 is not known to be used by any other host protein, so if we interfere with the cavity we are not going to interfere with any host cell function, only the function of Nef," he said. "This will inform better searches for inhibitors."

Hurley cautioned, however, that the research "needs more validation to prove that the cavity is a target. But we are excited because it is a potential target, and these things don't come along every day."

UC Berkeley scientist Xuefeng "Snow" Ren obtained the high-resolution snapshot of Nef bound to AP2 by crystallizing the proteins and zapping the complex with X-rays. She calculated the 3-D structure from the resulting X-ray diffraction pattern. She is now at work crystallizing the Nef-AP2 complex bound to the CD4 receptor to look for other possible drug targets on AP2 or CD4 that could prevent Nef from trashing CD4.

Hurley and Bonifacino are primarily interested in the function of adaptors like AP2 – there are at least five known adaptors in human cells – that control intracellular membrane traffic.

"This work was an extension of our work on clathrin adaptors, an opportunity to do something relevant to fighting HIV that was based on the purely basic research we are doing on the sorting of proteins to lysosomes," Hurley said.