Scientists from the Department of Energy's SLAC National Accelerator Laboratory and the University of California, Los Angeles have shown that a promising technique for accelerating electrons on waves of plasma is efficient enough to power a new generation of shorter, more economical accelerators. This could greatly expand their use in areas such as medicine, national security, industry and high-energy physics research.

This achievement is a milestone in demonstrating the practicality of plasma wakefield acceleration, a technique in which electrons gain energy by essentially surfing on a wave of electrons within an ionized gas.

Using SLAC's Facility for Advanced Accelerator Experimental Tests (FACET), a DOE Office of Science User Facility, the researchers boosted bunches of electrons to energies 400 to 500 times higher than they could reach traveling the same distance in a conventional accelerator. Just as important, energy was transferred to the electrons much more efficiently than in previous experiments. This crucial combination of energy and efficiency had never been reached before. The results are described in a paper published today in the journal Nature.

"Many of the practical aspects of an accelerator are determined by how quickly the particles can be accelerated," said SLAC accelerator physicist Mike Litos, lead author of the paper. "To put these results in context, we have now shown that we could use this technique to accelerate an electron beam to the same energies achieved in the 2-mile-long SLAC linear accelerator in less than 20 feet."

Plasma wakefields have been of interest to accelerator physicists for 35 years as one of the more promising ways to drive the smaller, cheaper accelerators of the future. The UCLA and SLAC groups have been at the forefront of research on plasma wakefield acceleration for more than a decade. In a 2007 paper, researchers announced they'd accelerated electrons in the tail end of a long electron bunch from 42 billion electronvolts to 85 billion electronvolts, causing a great deal of excitement in the scientific community. However, fewer than 1 billion of the 18 billion electrons in the pulse actually gained energy and they had a wide spread of energies, making them unsuitable for experiments. 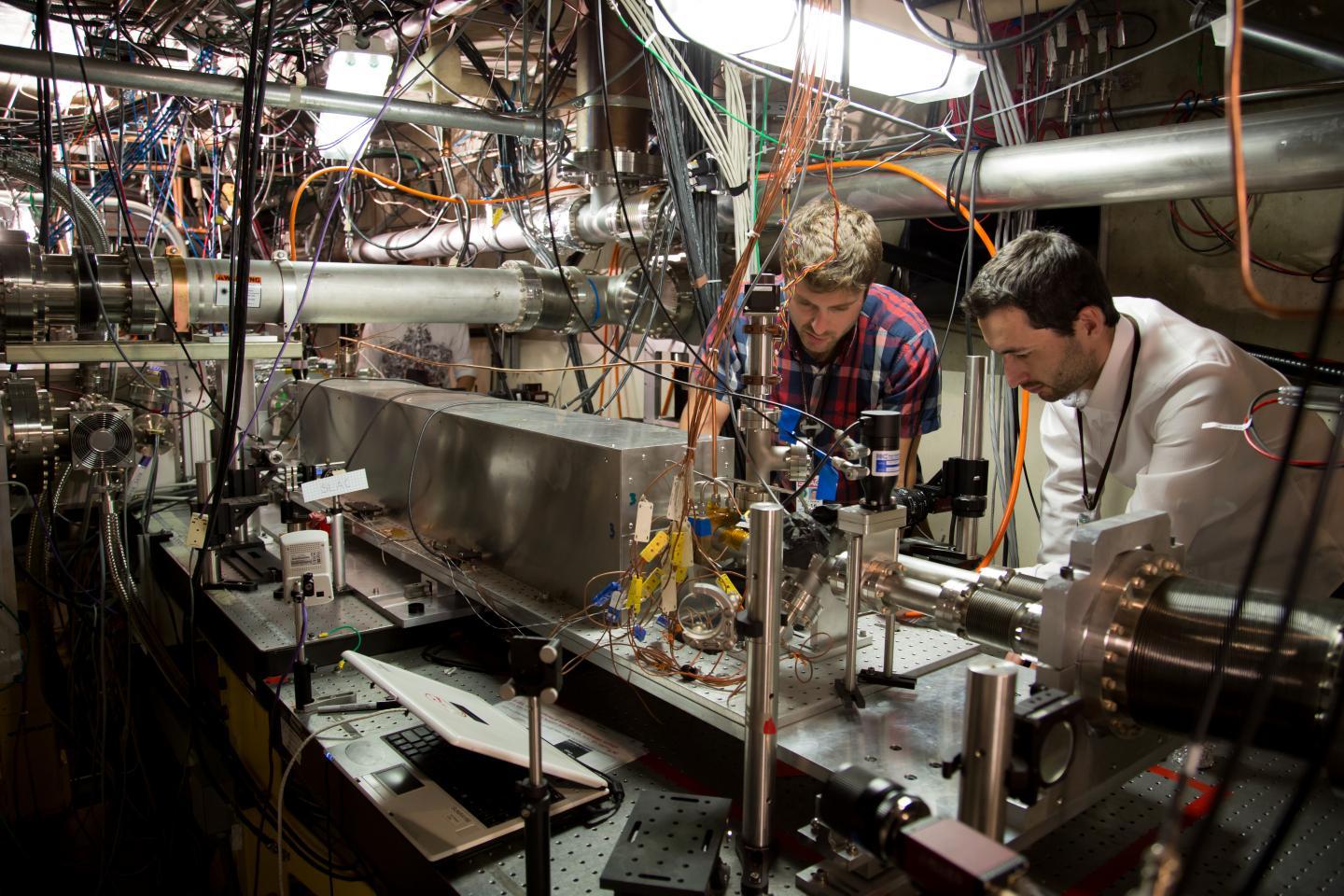 SLAC researchers Spencer Gessner, left, and Sebastien Corde monitor pairs of electron bunches sent into a plasma inside an oven of hot lithium gas at the Facility for Advanced Accelerator Experimental Tests (FACET). They are part of a team whose findings show that this electron acceleration technique, known as plasma wakefield acceleration, is powerful enough and efficient enough to drive a new generation of compact particle accelerators.

In this experiment, researchers sent pairs of electron bunches containing 5 billion to 6 billion electrons each into a laser-generated column of plasma inside an oven of hot lithium gas. The first bunch in each pair was the drive bunch; it blasted all the free electrons away from the lithium atoms, leaving the positively charged lithium nuclei behind – a configuration known as the "blowout regime." The blasted electrons then fell back in behind the second bunch of electrons, known as the trailing bunch, forming a "plasma wake" that propelled the trailing bunch to higher energy.

Previous experiments had demonstrated multi-bunch acceleration, but the team at SLAC was the first to reach the high energies of the blowout regime, where maximum energy gains at maximum efficiencies can be found. Of equal importance, the accelerated electrons wound up with a relatively small energy spread.

"These results have an additional significance beyond a successful experiment," said Mark Hogan, SLAC accelerator physicist and one of the principal investigators of the experiment. "Reaching the blowout regime with a two-bunch configuration has enabled us to increase the acceleration efficiency to a maximum of 50 percent – high enough to really show that plasma wakefield acceleration is a viable technology for future accelerators."

The plasma source used in the experiment was developed by a team of scientists led by Chandrashekhar Joshi, director of the Neptune Facility for Advanced Accelerator Research at UCLA. He is the UCLA principal investigator for this research, a faculty member with the UCLA Henry Samueli School of Engineering and Applied Science, and a long-time collaborator with the SLAC group. 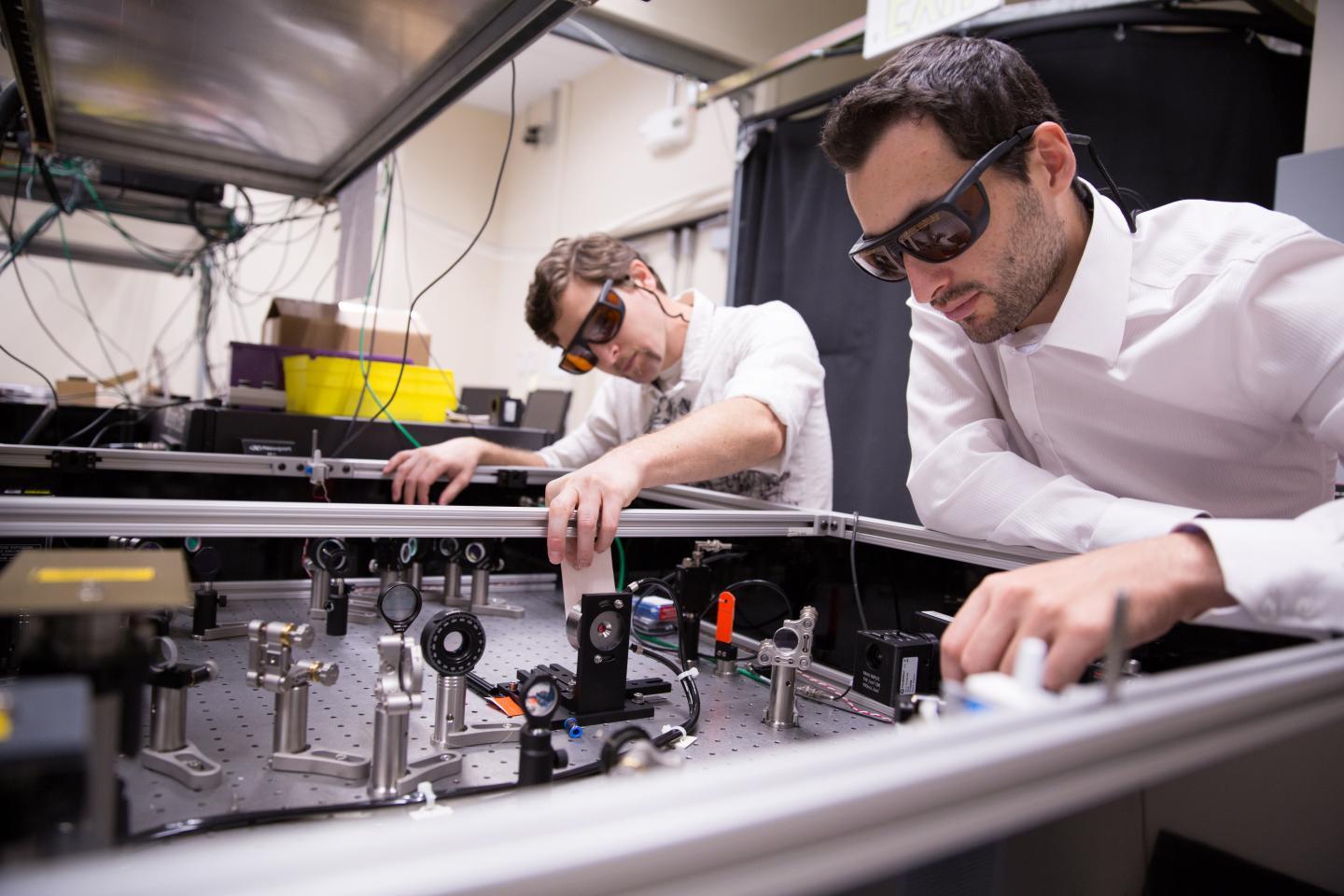 SLAC researchers Michael Litos, left, and Sebastien Corde use a laser table at the Facility for Advanced Accelerator Experimental Tests (FACET) to create a plasma used for accelerating electrons to high energies in a very short distance.

"It is gratifying to see that the UCLA-SLAC collaboration on plasma wakefield acceleration continues to solve seemingly intractable problems one by one through systematic experimental work," Joshi said. "It is this kind of transformative research that attracts the best and the brightest students to this field, and it is imperative that they have facilities such as FACET to carry it out."

There are more milestones ahead. Before plasma wakefield acceleration can be put to use, Hogan said, the trailing bunches must be shaped and spaced just right so all the electrons in a bunch receive exactly the same boost in energy, while maintaining the high overall quality of the electron beam.

"We have our work cut out for us," Hogan said. "But you don't get many chances to conduct research that you know in advance has the potential to be immensely rewarding, both scientifically and practically." 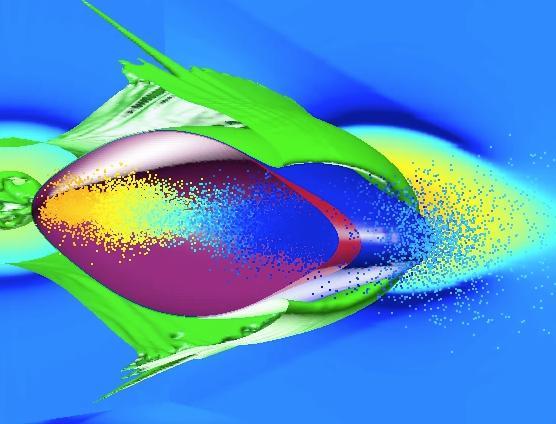 This simulation depicts two electron bunches -- containing 5 billion to 6 billion electrons each -- that were accelerated by a laser-generated column of plasma inside an oven of hot lithium gas during experiments at SLAC. The first bunch in each pair was the drive bunch; it blasted all the free electrons away from the lithium atoms, leaving the positively charged lithium nuclei behind -- a configuration known as the "blowout regime." The blasted electrons then fell back in behind the second bunch of electrons, known as the trailing bunch, forming a "plasma wake" that propelled the trailing bunch to higher energy