CHESTNUT HILL, MA (Oct. 11, 2013) – Chemists at Boston College have achieved a series of breakthroughs in their efforts to develop an economical means of harnessing artificial photosynthesis by narrowing the voltage gap between the two crucial processes of oxidation and reduction, according to their latest research, published this week in the journal Angewandte Chemie.

The team reports it has come within two-tenths of the photovoltage required to mimic oxidation and reduction respectively using unique photoanodes and photocathodes the team developed using novel nanowire components and coatings. Narrowing the gap using economical chemical components, the group moves researchers closer to using the man-made reaction for unique applications such as solar energy harvesting and storage.

"Many researchers have been trying to harvest solar energy and directly store it in chemical bonds," said lead author Dunwei Wang, an associate professor of chemistry at Boston College. "Solar panels can harvest energy, but economical storage has remained elusive. We are trying to borrow a page from Mother Nature whereby photosynthesis produces energy from the sun and stores it."

But copying Mother Nature is a tall order and this particular quest "requires materials that can absorb sunlight broadly, transfer the energy to excited charges at high efficiencies and catalyze specific reduction and oxidation reactions," the team writes in the article "Hematite-Based Water Splitting with Low Turn-on Voltage."

But in an artificial environment, a gap has persisted in the voltage required on either side of the reaction in order achieve these results, Wang said. In essence, oxidation and reduction require 1.2 to 1.3 volts combined to achieve the charge required to power artificial photosynthesis.

Previously, only rare materials allowed researchers bridge the gap, but those efforts are prohibitively expensive for widespread application. Wang and his lab have spent the past two years searching for inexpensive alternatives to bridge the voltage gap. 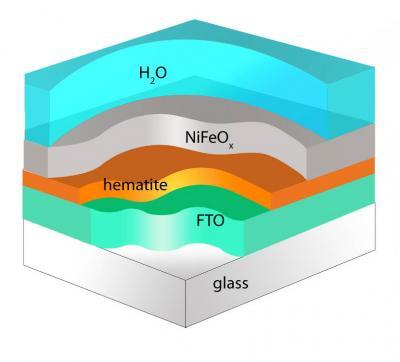 Taking Mother Nature's lead, researchers have sought new methods and materials capable of mimicking photosynthesis. Researchers at Boston College report that modifying the surface of hematite with a nickel iron oxide coating produces an increase in cathode photovoltage of nearly four-tenths of a volt. That's nearly enough energy to put an economical method of artificial photosynthesis within reach.

Earlier this year, the lab reported it had developed a new cathode preparation technique to improve hydrogen production. The findings removed most of the barriers to constructing an inexpensive, yet highly efficient photocathode, Wang said.

The team's latest research produced advances in photoanode development, where their engineered nanowire structures enabled the team to achieve a photovoltage of .6 volts using an iron oxide material. The voltage represents a 50 percent increase above the best prior results, which were reported last year. The results put Wang and his team within two-tenths of a volt of the necessary photovoltage.

The team achieved the gains by coating hematite, an iron oxide similar to rust, with nickel iron oxide.

"Our system, made of oxygen, silicon and iron – three of the four most abundant elements on earth – can now provide more than 1 volt of power together," said Wang. "Now we are just two-tenths of a volt short on the photoanode. That's a significant narrowing of the gap."

He says closing the gap completely is entirely within reach, particularly since other researchers have used different systems to do so. He said his lab might partner with other researchers in an effort to close the gap.

"With our innovations on the photocathode alone, this two-tenths of a volt is within reach," said Wang. "The real exciting part is that we were able to achieve six tenths of a volt using rust. That has never been done before."