Fluorescence microscopy has been a tour de force in biomedical imaging for the last several decades. In short, scientists couple fluorescent elements—the barcodes—to molecules they know will attach to the part of the cells they wanted to investigate. Illuminating the sample triggers each kind of barcode to fluoresce at a particular wavelength of light, such as red, blue, or green—indicating where the molecules of interest are.

However, the method is limited by the number of colors available—three or four—and sometimes the colors get blurry. That's where the magic of the DNA barcode comes in: colored-dots can be arranged into geometric patterns or fluorescent linear barcodes, and the combinations are almost limitless—substantially increasing the number of distinct molecules or cells scientists can observe in a sample, and the colors are easy to distinguish. 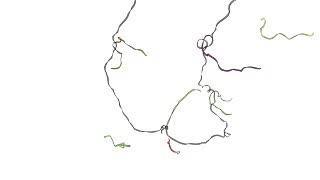 DNA origami is a process that can be used to self-assemble shapes that are of nanometer dimensions -- 100 nanometers is about 1,000 times shorter than the width of an average human hair. In this movie, one long, single strand of DNA (gray) is used as a 'scaffold,' which is manipulated to form a lattice through base-pairing with numerous 'staples'  short, chemically-synthesized DNA strands (colored).

Here's how it works: DNA origami follows the basic principles of the double helix in which the molecular bases A (adenosine) only bind to T (thymine), and C (cytosine) bases only bind to G (guanine). With those "givens" in place, a long strand of DNA is programmed to self-assemble by folding in on itself with the help of shorter strands to create predetermined forms—much like a single sheet of paper is folded to create a variety of designs in the traditional Japanese art.

To these more structurally complex DNA nano-structures, researchers can then attach fluorescent molecules to the desired spots, and use origami technology to generate a large pool of barcodes out of only a few fluorescent molecules. That could add a lot to the cellular imaging "toolbox" because it enables scientists to potentially light up more cellular structures than ever possible before.

"The intrinsic rigidity of the engineered DNA nanostructures is this method's greatest advantage; it holds the fluorescent pattern in place without the use of external forces. It also holds great promise for using the method to study cells in their native environments," Yin says. As proof of concept, the team demonstrated that one of their new barcodes successfully attached to the surface of a yeast cell.

More research beckons, particularly to determine what happens when each of the fluorescent barcodes are mixed together in a cell sample, which is routine in real-life biological and medical imaging systems—but there's plenty of good news as a starting point. It's low-cost, easy to do, and more robust compared to current methods, says Yin.

"We're moving fast in our ability to manipulate DNA molecules using origami technology," says Wyss Institute Founding Director Don Ingber, M.D., Ph.D., "and the landscape of its potential is tremendous—from helping us to develop targeted drug-delivery mechanisms to improving the scope of cellular and molecular activities we are able to observe at a disease site using the latest medical imaging techniques." 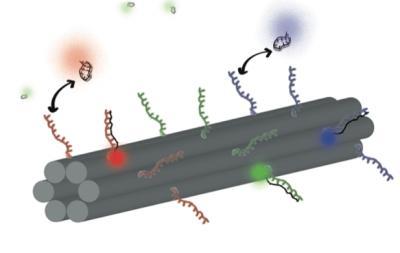 Researchers have created a new kind of barcode that uses DNA origami technology. Colored-dots can be arranged into geometric patterns or fluorescent linear DNA barcodes, and the combinations are almost limitless -- substantially increasing the number of distinct molecules or cells scientists can observe in a sample. 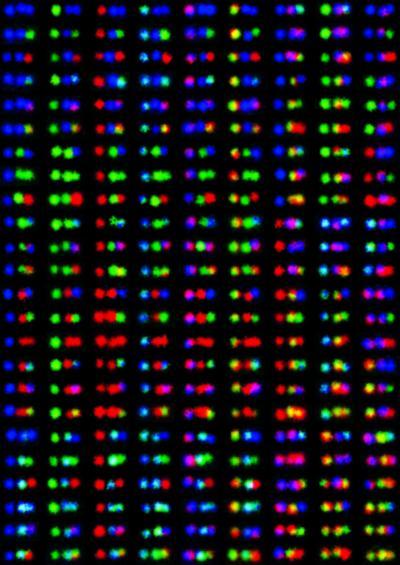 Researchers have created a new kind of barcode that uses DNA origami technology. Shown here are the color combinations resulting from attaching just three colors to a DNA nanotube using origami technology -- underscoring the potential of this new method.