Scientists investigating a 'biochemical switch' linked to strokes and heart disease claim to have made an advance in understanding how it is 'turned on'.

The breakthrough is announced today in the prestigious science journal Proceedings of the National Academy of Sciences.

The work was led by a team at the University of Leicester, working in collaboration with Cardiff University, to investigate the 'biochemical switch' identified as the P2X1 receptor. It was funded by the Wellcome Trust and the British Heart Foundation.

Lead researcher Professor Richard Evans, of the University of Leicester Department of Cell Physiology & Pharmacology, said: "P2X1 receptors are protein molecules expressed on blood platelets which are cells involved in blood clotting. Drugs that block these receptors have the potential to reduce "dangerous" blood clotting that leads to strokes and heart attacks. 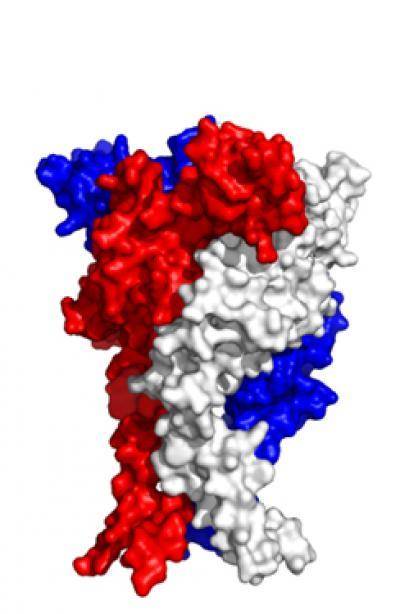 This is the model of the human P2X1 receptor for ATP,. The three subunits that make up the functional receptor are shown in red, white and blue.

"The P2X1 receptor is made of three identical parts and we have shown that activation leads to these twisting against each-other. We found that if we chemically locked the receptor to stop this twisting, then the P2X1 receptor could not be fully activated.

"This is important as it gives the first realistic insight into how these novel receptors are turned on.

"This work will help to develop drugs that can stop the P2X1 receptor being "turned on" and would be useful to prevent stroke and heart attack."