When a beating heart slips into an irregular, life-threatening rhythm, the treatment is well known: deliver a burst of electric current from a pacemaker or defibrillator. But because the electricity itself can cause pain, tissue damage and other serious side-effects, a Johns Hopkins-led research team wants to replace these jolts with a kinder, gentler remedy: light.

In a paper published Aug. 28 in the online journal Nature Communications, five biomedical engineers from Johns Hopkins and Stony Brook universities described their plan to use biological lab data and an intricate computer model to devise a better way to heal ailing hearts. Other scientists are already using light-sensitive cells to control certain activities in the brain. The Johns Hopkins-Stony Brook researchers say they plan to give this technique a cardiac twist so that doctors in the near future will be able to use low-energy light to solve serious heart problems such as arrhythmia.

"Applying electricity to the heart has its drawbacks," said the project's supervisor, Natalia Trayanova, the Murray B. Sachs Professor of Biomedical Engineering at Johns Hopkins. "When we use a defibrillator, it's like blasting open a door because we don't have the key. It applies too much force and too little finesse. We want to control this treatment in a more intelligent way. We think it's possible to use light to reshape the behavior of the heart without blasting it."

To achieve this, Trayanova's team is diving into the field of optogenetics, which is only about a decade old. Pioneered by scientists at Stanford, optogenetics refers to the insertion of light-responsive proteins called opsins into cells. When exposed to light, these proteins become tiny portals within the target cells, allowing a stream of ions—an electric charge—to pass through. Early researchers have begun using this tactic to control the bioelectric behavior of certain brain cells, forming a first step toward treating psychiatric disorders with light.

In the Nature Communications paper, the researchers reported that they had successfully tested this same technique on a heart -- one that "beats" inside a computer. Trayanova has spent many years developing highly detailed computer models of the heart that can simulate cardiac behavior from the molecular and cellular levels all the way up to that of the heart as a whole. At Johns Hopkins, she directs the Computational Cardiology Lab within the Institute for Computational Medicine. 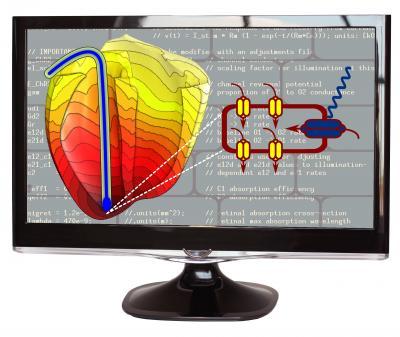 In this illustration, the "optrode" at left delivers blue light to the heart via a fiber-optic tip. In the enlargement at right, a heart cell (large red oval) contains an implanted light-sensitive "opsin" protein (blue oval) that works alongside the heart's own proteins (yellow ovals). This teamwork allows the cell to convert light energy into an electric kick that triggers a healthy heartbeat.

As detailed in the journal article, the Johns Hopkins computer model for treating the heart with light incorporates biological data from the Stony Brook lab of Emilia Entcheva, an associate professor of biomedical engineering. The Stony Brook collaborators are working on techniques to make heart tissue light-sensitive by inserting opsins into some cells. They also will test how these cells respond when illuminated.

"Experiments from this lab generated the data we used to build our computer model for this project," Trayanova said. "As the Stony Brook lab generates new data, we will use it to refine our model."

In Trayanova's own lab, her team members will use this model to conduct virtual experiments. They will try to determine how to position and control the light-sensitive cells to help the heart maintain a healthy rhythm and pumping activity. They will also try to gauge how much light is needed to activate the healing process. The overall goal is to use the computer model to push the research closer to the day when doctors can begin treating their heart patients with gentle light beams. The researchers say it could happen within a decade.

"The most promising thing about having a digital framework that is so accurate and reliable is that we can anticipate which experiments are really worth doing to move this technology along more quickly," said Patrick M. Boyle, a postdoctoral fellow in Trayanova's lab and lead author of the Nature Communications paper. "One of the great things about using light is that it can be directed at very specific areas. It also involves very little energy. In many cases, it's less harmful and more efficient than electricity."

After the technology is honed through the computer modeling tests, it could be incorporated into light-based pacemakers and defibrillators. It is interesting to note that it was a Johns Hopkins electrical engineering researcher, William B. Kouwenhoven, who developed the closed-chest electric cardiac defibrillator, which has been used since was the 1950s to save lives.