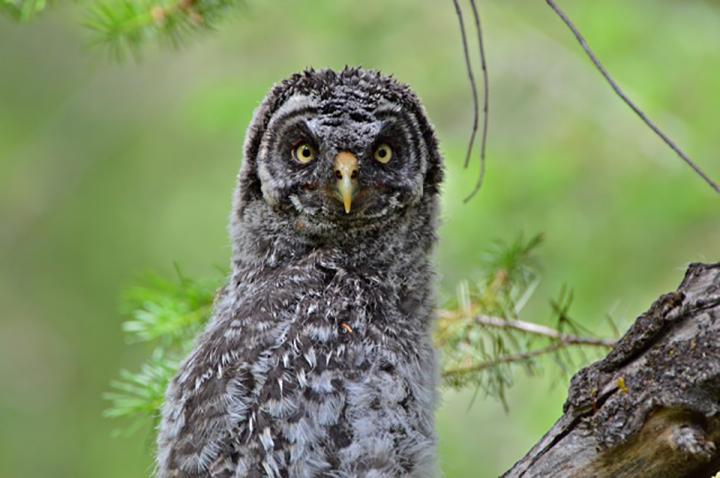 image: University of Wyoming researchers led a study of great gray owls in a four-state region. The study, published in the May 31 online issue of Conservation Genetics, showed that range discontinuity could lead to genetic drift and subsequent loss of genetic diversity in these birds.

A University of Wyoming researcher led a study of great gray owls in a four-state region, showing that range discontinuity could lead to genetic drift and subsequent loss of genetic diversity in these birds.

Lower genetic diversity in these owls means they are more susceptible to changes in their environment and, thus, less able to adapt quickly.

"With lower genetic diversity, such owls have less ability to adapt to changes that include extreme fire effects on their habitats; human developments; stresses caused by diseases such as West Nile virus and trichomonas, a nasty parasite that damages their oral cavity and can lead to starvation; and other diseases," says Holly Ernest, a UW professor of wildlife genomics and disease ecology, and the Wyoming Excellence Chair in Disease Ecology in UW's Department of Veterinary Sciences and the Program in Ecology. "Another stress can be overzealous photographers who get too near nesting sites and scare great gray owl moms and dads off their nests and endanger the nestlings."

Ernest was the senior and corresponding author of a paper, titled "Population Genomic Diversity and Structure at the Discontinuous Southern Range of the Great Gray Owl in North America," that was published online May 31 in Conservation Genetics, a journal that promotes the conservation of biodiversity. The journal publishes original research papers, short communications, review papers and perspectives. Contributions include work from the disciplines of population genetics, molecular ecology, molecular biology, evolutionary biology, systematics, forensics and others.

Beth Mendelsohn, a 2018 UW Master of Science graduate in veterinary sciences and the Haub School of Environment and Natural Resources, from Missoula, Mont., is the paper's lead author. Mendelsohn is now a raptor biologist conducting research to improve owl and hawk conservation in Rocky Mountain ecosystems.

Other contributors to the paper are Bryan Bedrosian, research director of the Teton Raptor Center; Sierra Love Stowell, a research genomicist affiliated with Ernest's lab and a UW postdoctoral researcher from 2016-18; Roderick Gagne, a research scientist at Colorado State University and a UW postdoctoral researcher from 2015-17; Melanie LaCava, a UW Ph.D. candidate in the Program in Ecology and Department of Veterinary Sciences, from San Diego, Calif.; Braden Godwin, a 2019 UW Master of Science graduate in veterinary sciences and the Haub School of Environment and Natural Resources; and Joshua Hull, an adjunct associate professor of animal science at the University of California-Davis.

"This study constitutes the first genomic work on great gray owls and the first genetic analysis that includes Wyoming, which represents the southern extent of the species range in the Rocky Mountains and is impacted by habitat loss," Ernest says.

"When compared to some other bird species, we found that great gray owls seem to have lower genetic diversity," Mendelsohn says. "However, we have no evidence that the low genetic diversity is currently having a detrimental effect on the species. It may, however, affect the species' future adaptability."

"We hypothesize that Wyoming owls live in their habitat range that is like a peninsula finger of habitat coming down, from north to south. From the main, larger habitat range to the north (Montana and up into Canada), they have habitat and range that are still connected, albeit a very tenuous connection, to the large main Montana/Canada habitat and range of great gray owls," Ernest says. "Wyoming owls exist on one of the most southern extents of great gray owl range that still has some connection with that larger Montana/Canada habitat."

By contrast, the great gray owl habitat in Oregon and California is cut off from the rest of the owls' range, which is mainly in boreal forests in Canada and around the globe in such regions as Russia, Ernest says. The owls' range becomes increasingly fragmented as it extends farther south. The northern boreal forest transitions to montane forest and borders on sagebrush and desert in Oregon and California.

As a result, these range-edge owl populations have a heightened susceptibility to disease and human-caused mortality, such as from trees being cut down to build homes; climate change; genetic diversity erosion; and potential extinction. Small, isolated populations of these owls are more likely to experience inbreeding, which results in lower genetic diversity.

"Conservationists could learn from this that great gray owls in this part of their range may need extra protections and may be vulnerable to environmental change," Mendelsohn says.

During the study, 158 DNA samples from unique owl individuals were sequenced, Mendelsohn says. After filtering for quality and marker coverage, the research team retained 123 individuals that had enough high-quality sequencing reads. For some of the analyses, a subset of 78 individuals was used because known related individuals were removed.

The genomics part of this work took a little under 2.5 years at UW, Mendelsohn says.

"Prior to that, I worked as a field technician at the Teton Raptor Center and helped collect DNA samples from owls from 2013-16," she says. "The lead biologist on the project, Bryan Bedrosian, connected me with Holly for my master's work."