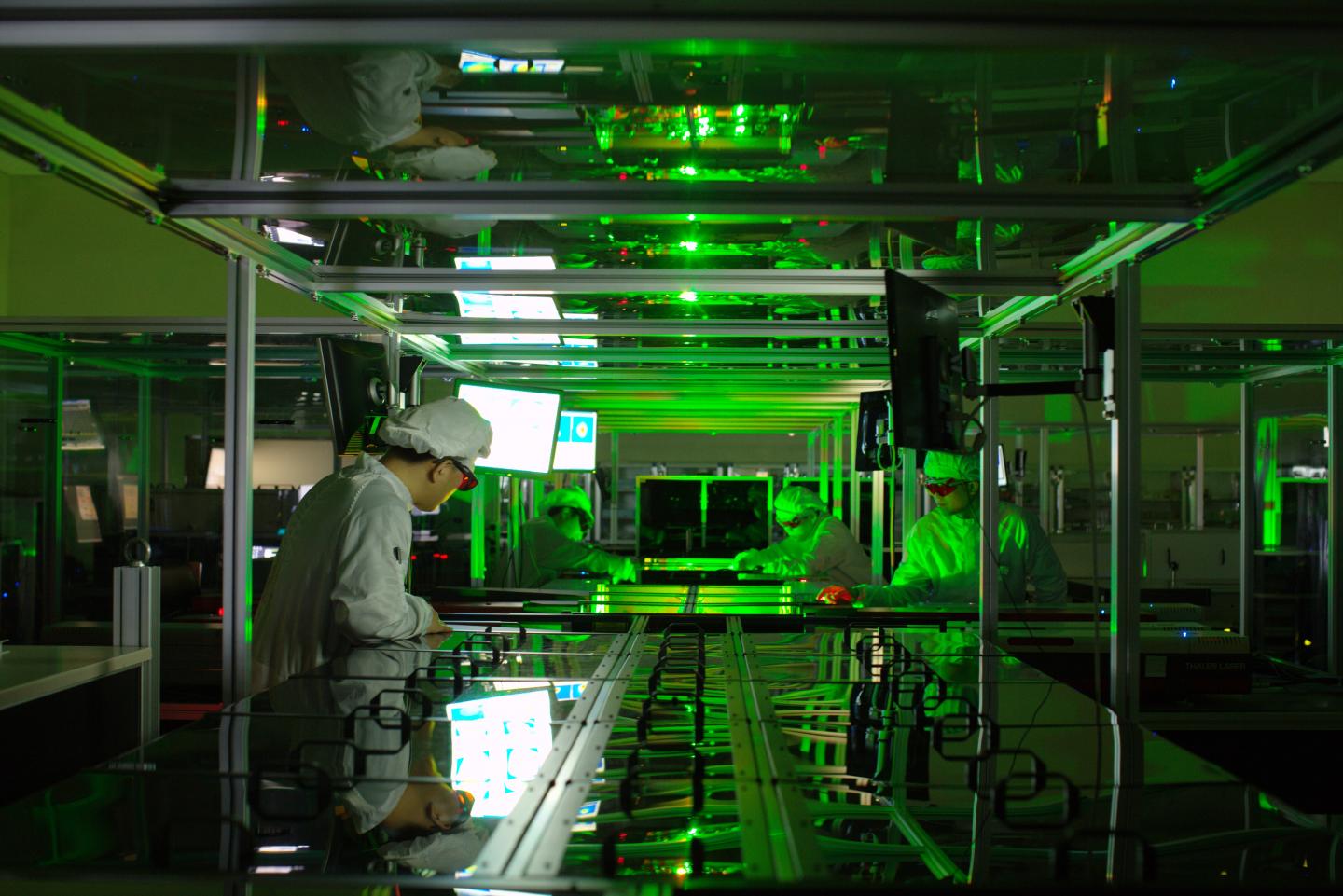 IMAGE: Researchers created high-intensity pulses using the petawatt laser (pictured) at the Center for Relativistic Laser Science (CoReLS) in the Republic of Korea. This high intensity laser will allow scientists to...

WASHINGTON -- Researchers have demonstrated a record-high laser pulse intensity of over 1023 W/cm2 using the petawatt laser at the Center for Relativistic Laser Science (CoReLS), Institute for Basic Science in the Republic of Korea. It took more than a decade to reach this laser intensity, which is ten times that reported by a team at the University of Michigan in 2004. These ultrahigh intensity light pulses will enable exploration of complex interactions between light and matter in ways not possible before.

The powerful laser can be used to examine phenomena believed to be responsible for high-power cosmic rays, which have energies of more than a quadrillion (1015) electronvolts (eV). Although scientists know that these rays originate from somewhere outside our solar system, how they are made and what is forming them has been a longstanding mystery.

"This high intensity laser will allow us to examine astrophysical phenomena such as electron-photon and photon-photon scattering in the lab," said Chang Hee Nam, director of CoReLS and professor at Gwangju Institute of Science & Technology. "We can use it to experimentally test and access theoretical ideas, some of which were first proposed almost a century ago."

In Optica, The Optical Society's (OSA) journal for high impact research, the researchers report the results of years of work to increase the intensity of laser pulses from the CoReLS laser. Studying laser matter-interactions requires a tightly focused laser beam and the researchers were able to focus the laser pulses to a spot size of just over one micron, less than one fiftieth the diameter of a human hair. The new record-breaking laser intensity is comparable to focusing all the light reaching earth from the sun to a spot of 10 microns.

"This high intensity laser will let us tackle new and challenging science, especially strong field quantum electrodynamics, which has been mainly dealt with by theoreticians," said Nam. "In addition to helping us better understand astrophysical phenomena, it could also provide the information necessary to develop new sources for a type of radiation treatment that uses high-energy protons to treat cancer."

The new accomplishment extends previous work in which the researchers demonstrated a femtosecond laser system, based on Ti:Sapphire, that produces 4 petawatt (PW) pulses with durations of less than 20 femtoseconds while focused to a 1 micrometer spot. This laser, which was reported in 2017, produced a power roughly 1,000 times larger than all the electrical power on Earth in a laser pulse that only lasts twenty quadrillionths of a second.

To produce high-intensity laser pulses on target, the generated optical pulses must be focused extremely tightly. In this new work, the researchers apply an adaptive optics system to precisely compensate optical distortions. This system involves deformable mirrors -- which have a controllable reflective surface shape -- to precisely correct distortions in the laser and generate a beam with a very well-controlled wavefront. They then used a large off-axis parabolic mirror to achieve an extremely tight focus. This process requires delicate handling of the focusing optical system.

"Our years of experience gained while developing ultrahigh power lasers allowed us to accomplish the formidable task of focusing the PW laser with the beam size of 28 cm to a micrometer spot to accomplish a laser intensity exceeding 1023 W/cm2," said Nam.

The researchers are using these high-intensity pulses to produce electrons with an energy over 1 GeV (109 eV) and to work in the nonlinear regime in which one electron collides with several hundred laser photons at once. This process is a type of strong field quantum electrodynamics called nonlinear Compton scattering, which is thought to contribute to the generation of extremely energetic cosmic rays.

They will also use the radiation pressure created by the ultrahigh intensity laser to accelerate protons. Understanding how this process occurs could help develop a new laser-based proton source for cancer treatments. Sources used in today's radiation treatments are generated using an accelerator that requires a huge radiation shield. A laser-driven proton source is expected to reduce the system cost, making the proton oncology machine less costly and thus more widely accessible to patients.

The researchers continue to develop new ideas for enhancing the laser intensity even more without significantly increasing the size of the laser system. One way to accomplish this would be to figure out a new way to reduce the laser pulse duration. As lasers with peaks power ranging from 1 to 10 PW are now in operation and several facilities reaching 100 PW are being planned, there is no doubt that high-intensity physics will progress tremendously in the near future.