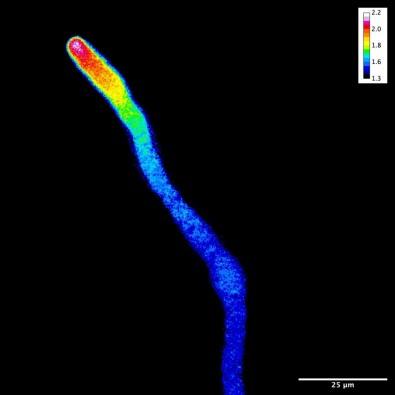 IMAGE: Pollen tube in Arabidopsis thaliana. A study showing how pollen tubes grow into flowers to reach the ovule paves the way for the improvement of food crop varieties as well...

A group of researchers from four countries, including Brazil, have worked out exactly how a pollen tube, the plant cell that emerges from a grain of pollen, grows up to a thousand-fold to reach an ovule deep inside the flower. The key to this growth is an inflow and outflow of protons that creates electrical activity at the cell membrane and makes the cell grow. The results of the study will help scientists understand an array of related phenomena, such as seed production, the growth of fungi, and even how neurons develop.

The study was supported by FAPESP. The findings are described in a paper authored by researchers affiliated with institutions in Brazil, Denmark, Portugal and the United States and published in Nature Communications.

“A grain of pollen consists of a single cell. When it comes into contact with the female sex organ on the surface of a flower, it grows at a very high speed, forming what we call a pollen tube, until it reaches the base of the flower’s ovary and discharges the sperm cells. How this happens was very poorly understood until now” according to Maria Teresa Portes, who conducted the research during a postdoctoral fellowship at the University of Maryland in the US.

Scientists have long been intrigued by the exceptionally fast pace of pollen tube growth, which is the fastest type of cell growth observed among all living organisms. Its elongation originates at the tip of the tube and is termed tip growth. The species used in the study was Arabidopsis thaliana (thale cress), a small flowering plant native to Eurasia and Africa. It belongs to the mustard family (Brassicaceae) and is widely chosen as a model organism because of its usefulness for genetic experiments. Its pollen tube grows as much as 3 mm per day.

The researchers produced mutant varieties of the plant in the laboratory in which some genes were modified. They discovered that inactivating three AHA genes inhibited pollen tube growth. AHA refers to the autoinhibited H+-ATPase gene family.

In the mutant plants, only the eggs closest to the surface were fertilized. As a result, the plants produced only 5% of the normal number of seeds.

In a series of experiments, the researchers found that the proteins expressed from these genes acted as proton pumps, injecting protons from the environment to make the pollen tube cell more acidic and promote faster growth.

“We wanted to understand how the cell organizes this growth process. Proton distribution in the ion gradient was found to be non-uniform, with protons bunching at the tip of the tube, and there are also gradients of molecules such as calcium and actin,” said Daniel Santa Cruz Damineli, another coauthor of the study who is currently a postdoctoral fellow in the University of São Paulo’s Medical School (FM-USP) in Brazil with a scholarship from FAPESP.

From seeds to neurons

Among several potential developments arising from the study’s findings is a deeper understanding of how seeds are produced, so that they can, in theory, be used to create improved varieties of food crops such as legumes and cereals.

“We don’t know everything about how the pollen tube is guided and how a plant’s male and female organs communicate,” Portes said. “This is a major research interest and could culminate in seed production. Plant growth necessarily involves this mechanism, which we’re just starting to understand more deeply.”

This knowledge should also help scientists understand tip-growth in other cells or organisms, such as that of fungal hyphae, neurons and cancer cells.

“Biologically speaking, how tip growth is orchestrated is poorly understood. Now we can study it further,” Damineli said.