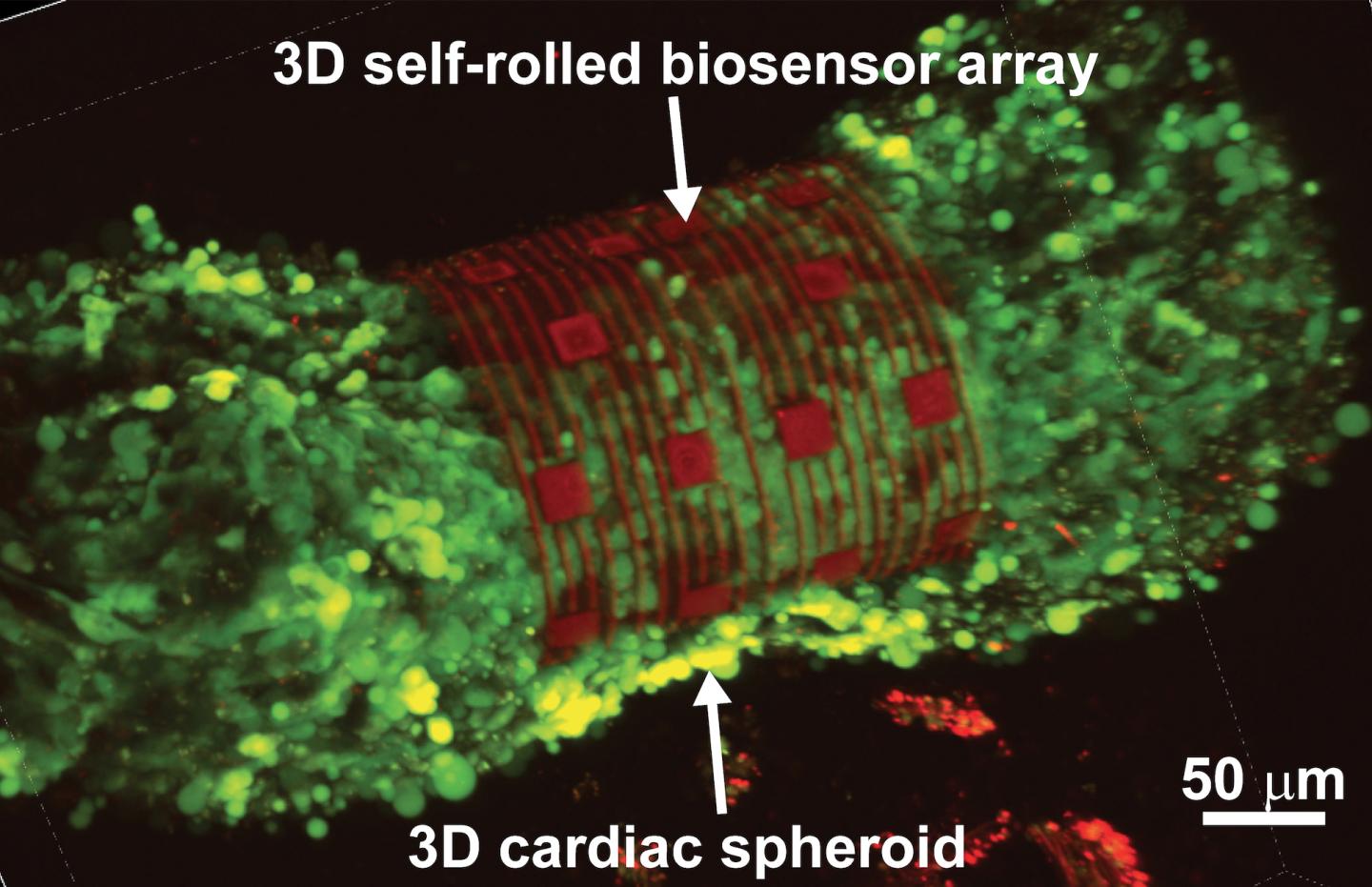 Researchers from Carnegie Mellon University (CMU) and Nanyang Technological University, Singapore (NTU Singapore) have developed an organ-on-an-electronic-chip platform, which uses bioelectrical sensors to measure the electrophysiology of the heart cells in three dimensions. These 3D, self-rolling biosensor arrays coil up over heart cell spheroid tissues to form an "organ-on-e-chip," thus enabling the researchers to study how cells communicate with each other in multicellular systems such as the heart.

The organ-on-e-chip approach will help develop and assess the efficacy of drugs for disease treatment--perhaps even enabling researchers to screen for drugs and toxins directly on a human-like tissue, rather than testing on animal tissue. The platform will also be used to shed light on the connection between the heart's electrical signals and disease, such as arrhythmias. The research, published in Science Advances, allows the researchers to investigate processes in cultured cells that currently are not accessible, such as tissue development and cell maturation.

"For decades, electrophysiology was done using cells and cultures on two-dimensional surfaces, such as culture dishes," says Associate Professor of Biomedical Engineering (BME) and Materials Science & Engineering (MSE) Tzahi Cohen-Karni. "We are trying to circumvent the challenge of reading the heart's electrical patterns in 3D by developing a way to shrink-wrap sensors around heart cells and extracting electrophysiological information from this tissue."

The organ-on-e-chip starts out similarly. The researchers pin an array of sensors made of either metallic electrodes or graphene sensors to the chip's surface, then etch off a bottom layer of germanium, which is known as the "sacrificial layer." Once this sacrificial layer is removed, the biosensor array is released from its hold and rolls up from the surface in a barrel shaped structure.

"Essentially, we have created 3D self-rolling biosensor arrays for exploring the electrophysiology of induced pluripotent stem cell derived cardiomyocytes," says lead author of the study and BME Ph.D. student Anna Kalmykov. "This platform could be used to do research into cardiac tissue regeneration and maturation that potentially can be used to treat damaged tissue after a heart attack, for example, or developing new drugs to treat disease."

Through collaboration with the labs of BME/MSE Professor Adam Feinberg and former CMU faculty Jimmy Hsia, now Dean of the Graduate College of NTU Singapore, the researchers were able to design a proof of concept and test them on 3D micro-mold formed cardiomyocyte spheroids.

"Mechanics analysis of the roll-up process enables us to precisely control the shape of the sensors to ensure conforming contact between the sensors and the cardiac tissue," says NTU Professor Jimmy Hsia. "The technique also automatically adjusts the level of the delicate 'touch' between the sensors and the tissue such that high quality electric signals are measured without changing in the physiological conditions of the tissue due to external pressure."

"The whole idea is to take methods that are traditionally done in planar geometry and do them in three dimensions," says Cohen-Karni. "Our organs are 3D in nature. For many years, electrophysiology was done using just cells cultured on a 2D tissue culture dish. But now, these amazing electrophysiology techniques can be applied to 3D structures."