Research shows that the more chocolate you eat, the lower your body fat level is

University of Granada researchers from the Faculty of Medicine and the Faculty of Physical Activity and Sports Sciences have scientifically disproven the old belief that eating chocolate is fattening. In an article published this week in the journal Nutrition, the authors have shown that higher consumption of chocolate is associated with lower levels of total fat (fat deposited all over the body) and central fat (abdominal), independently of whether or not the individual participates in regular physical activity and of diet, among other factors.

The researchers determined whether greater chocolate consumption associated with higher body mass index and other indicators of total and central body fat in adolescents participating in the HELENA (Healthy Lifestyle in Europe by Nutrition in Adolescence) study. This project, financed by the European Union, studies eating habits and lifestyle in young people in 9 European countries, including Spain.

Independent of diet and physical activity

The study involved 1458 adolescents aged between 12 and 17 years and results showed that a higher level of chocolate consumption associated with lower levels of total and central fat when these were estimated through body mass index, body fat percentage—measured by both skinfolds and bioelectrical impedance analysis—and waist circumference. These results were independent of the participant's sex, age, sexual maturation, total energy intake, intake of saturated fats, fruit and vegetables, consumption of tea and coffee, and physical activity.

As the principle author Magdalena Cuenca-García explains, although chocolate is considered a high energy content food—it is rich in sugars and saturated fats—"recent studies in adults suggest chocolate consumption is associated with a lower risk of cardiometabolic disorders".

In fact, chocolate is rich in flavonoids—especially catechins—which have many healthy properties: "they have important antioxidant, antithrombotic, anti-inflammatory and antihypertensive effects and can help prevent ischemic heart disease". 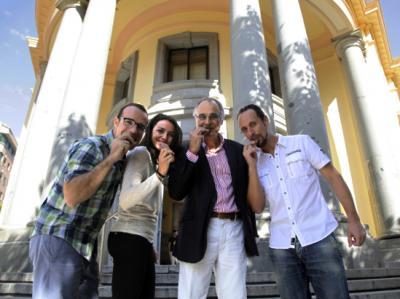 In the photo are the University of Granada researchers who have published this article. From left to right, Jonatan R. Ruiz, Magdalena Cuenca-García, Manuel J. Castillo and Francisco B. Ortega. Dr Ruiz and Dr Ortega currently work in the Department of Physical and Sports Education (Faculty of Physical Activity and Sports Sciences), and Dr Cuenca-García and Dr Castillo work in the Department of Physiology (Faculty of Medicine).

Recently, another cross-sectional study in adults conducted by University of California researchers found that more frequent chocolate consumption also associated with a lower body mass index. What's more, these results were confirmed in a longitudinal study in women who followed a catechin-rich diet.

The effect could be partly due to the influence of catechins on cortisol production and on insulin sensitivity, both of which are related with overweight and obesity.

Calorie impact is not the only thing that matters

The University of Granada researchers have sought to go further and analyse the effect of chocolate consumption at a critical age like adolescence by also controlling other factors that could influence the accumulation of fat. The research, which is both novel and, perhaps, the largest and best-controlled study to date, is the first to focus on the adolescent population. It includes a large number of body measures, objective measurement of physical activity, detailed dietary recall with 2 non-consecutive 24-hour registers using image-based software, and controls for the possible effect of a group of key variables.

In Nutrition, the authors stress that the biological impact of foods should not be evaluated solely in terms of calories. "The most recent epidemiologic research focuses on studying the relation between specific foods—both for their calorie content and for their components—and the risk factors for developing chronic illnesses, including overweight and obesity".

Despite their results, the authors insist that chocolate consumption should always be moderate. "In moderate quantities, chocolate can be good for you, as our study has shown. But, undoubtedly, excessive consumption is prejudicial. As they say: you can have too much of a good thing".