LAWRENCE -- New study results from the University of Kansas to be presented this weekend at the Gerontological Society of America's annual meeting in Washington, D.C., bolster the adage that "heart healthy is brain healthy." The investigation shows neighborhoods that motivate walking can stave off cognitive decline in older adults.

"People can walk either to get somewhere or for leisure," said Amber Watts, assistant professor of clinical psychology, who will share her findings at a symposium Sunday, Nov. 9, in Liberty Salon K at the Washington Marriott Marquis.

"Depending on which type of walking you're interested in, a neighborhood might have different characteristics," she said. "Features of a neighborhood that encourage walking for transportation require having someplace worth walking to, like neighbors' houses, stores and parks."

Watts said neighborhoods that inspire walking for leisure also are full of pleasant things to look at, like walking trails or shade provided by trees. Also, such neighborhoods should make people feel secure on foot.

"For older adults, safety is a key issue in walkability," she said. "That includes things like traffic lights that give ample time to cross, sidewalks that are in good repair, and benches to stop and rest."

"GIS data can tell us about roads, sidewalks, elevation, terrain, distances between locations and a variety of other pieces of information," Watts said. "We then use a process called Space Syntax to measure these features, including the number of intersections, distances between places or connections between a person's home and other possible destinations they might walk to. We're also interested in how complicated a route is to get from one place to another. For example, is it a straight line from point A to point B, or does it require a lot of turns to get there?" 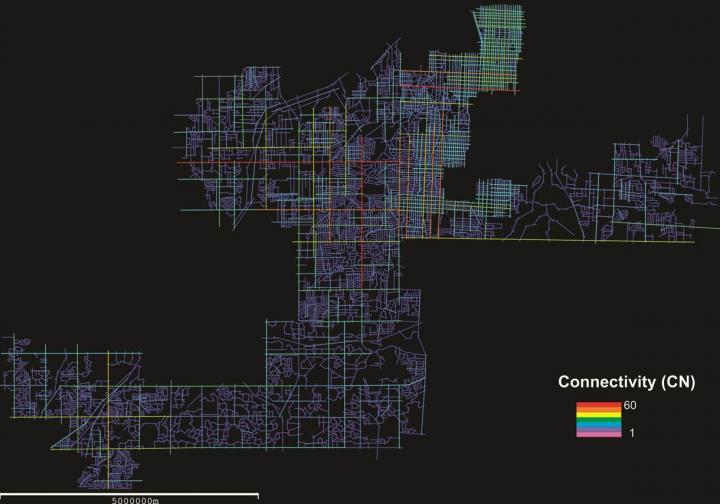 Amber Watts of the University of Kansas found that walkable communities help to keep cognition sharp in older adults.

Watts said easy-to-walk communities resulted in better outcomes both for physical health -- such as lower body mass and blood pressure -- and cognition (such as better memory) in the 25 people with mild Alzheimer's disease and 39 older adults without cognitive impairment she tracked. She believes that older adults, health care professionals, caregivers, architects and urban planners could benefit from the findings.

The KU researcher and her colleagues used the space syntax data to estimate a "walkability score" for subjects' home addresses. Then they estimated the relationship between people's neighborhood scores and their performance on cognitive tests over two years, factoring in issues like age, gender, education and wealth, that might influence people's cognitive scores independently of neighborhood characteristics.

Interestingly, she found that intricate community layouts might help to keep cognition sharp, rather than serve as a source of confusion in older adults.

"There seems to be a component of a person's mental representation of the spatial environment, for example, the ability to picture the streets like a mental map," Watts said. "Complex environments may require more complex mental processes to navigate. Our findings suggest that people with neighborhoods that require more mental complexity actually experience less decline in their mental functioning over time."

Watts said that older adults, just like all people, tend to choose the easiest available route or the path of least resistance. "If there is an elevator immediately available, why would we choose the stairs?" she said.

"When the environment presents challenges that are reasonable and within a person's ability level, it keeps our bodies and minds healthy," Watts said. "We need that stimulation. With regard to the complexity of neighborhood street layouts -- for example, the number of turns required getting from point A to point B -- our results demonstrate that more complex neighborhoods are associated with preserved cognitive performance over time. We think this may be because mental challenges are good for us. They help keep us active and working at that optimal level instead of choosing the path of least resistance."

Watts said cognitive testing of the research subjects fell into three categories: attention, or mentally rearranging patterns of letters and numbers; verbal memory, or recalling words immediately and after a delay; and mental status, a screening test for symptoms of dementia.

"I've always been interested in why people choose to engage in healthy behaviors or not," she said. "I had been very focused around issues of the individual until I met and started working with architects who study how the physical world around us influences our choices. I found that fascinating, and I wanted to incorporate that into my work about health behaviors."