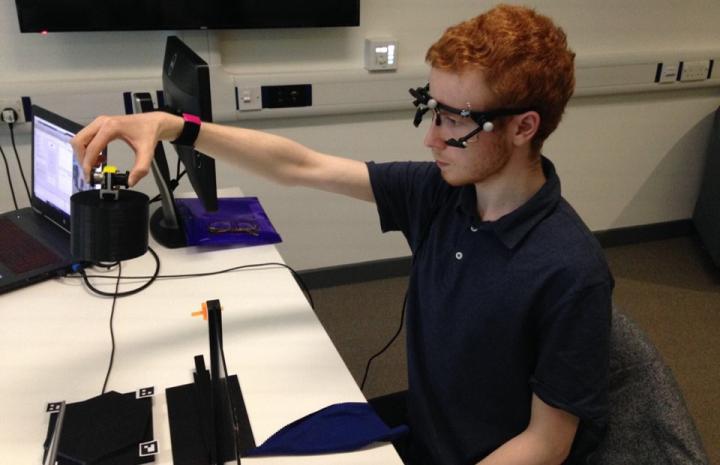 IMAGE: The latest research from the teams at Bath and Exeter focused on sensorimotor difficulties associated with autism.

A new study into the causes of sensorimotor impairments prevalent among autistic people could pave the way for better treatment and management in the future, say psychologists.

Publishing findings in the leading journal BRAIN [today: Friday 25 September], the scientists from the universities of Exeter and Bath present fresh evidence that sensorimotor difficulties associated with autism are likely caused by a number of complex and precise neurobiological processes, including differences in the way autistic people perceive the world around them.

Common sensorimotor features associated with autism can include sensory overload and impaired hand-eye coordination but also general clumsiness. In addition to the well-documented challenges traditionally associated with autism - notably in social communication and interaction, and restricted and repetitive patterns of behaviours - these impairments represent a major hurdle for individuals and typically will last throughout their lives.

Yet, despite this, surprisingly little is known about the origins or mechanisms underlying these behavioural traits and their specific impacts on an individual's quality of life. For this study researchers used state-of-the-art mobile eye-tracking and motion capture technology to understand more about the causes of these difficulties and how they might be better managed.

Enlisting over 150 people both with and without autism, they tested a number of processes and mechanisms associated with sensorimotor difficulties. Most significantly, they found that many processes that were previously thought to underpin these movement difficulties in autism actually do not appear to be impaired. The research is part of a South West Doctoral Training Partnership studentship in affiliation with the ESRC and was led by Tom Arthur - a PhD student at both the universities of Exeter and Bath.

He explains: "This study looked at how individuals control their hand-eye movements when picking up and lifting things - anyone who's lifted an empty suitcase they thought was full of clothes will know that we usually do this in a very predictive way.

"Our results showed that autistic people lift new objects in just as predictive a way as non-autistic people. These findings go against many existing research theories, and indicate that previous conclusions in the field may have been a bit too broad or simplistic. This is important, because many daily living skills and behaviours depend on an individual's ability to predict the world and act upon their prior expectations".

Co-author Dr Gavin Buckingham from the Department of Sport and Health Sciences at the University of Exeter added: "It is increasingly clear that sensory and movement-based difficulties are core characteristics of autism that have implications for most autistic people's lives. However, there is currently a real lack of scientific understanding about these features and an absence of evidence-based interventions for managing these daily living difficulties."

Professor Mark Brosnan, Director of the Centre for Applied Autism Research at the University of Bath, said: "By advancing our understanding of the challenges that autistic people experience when trying to predict an unpredictable world, this research will have great implications for practice. Already the team are exploring the practical implications of this research within Virtual Reality Environments."

It is hoped such work could form the basis of future teaching and coaching interventions that aim to combat autism-related sensorimotor difficulties.

Autism is a neurodevelopmental condition which is diagnosed in 1- 2% of individuals typically on the basis of persistent difficulties with social communication and interaction and / or restricted and repetitive patterns of behaviours, activities or interests. In addition, sensorimotor impairments are considered as 'cardinal' features of autism.