Internal damage in fiber-reinforced composites, materials used in structures of modern airplanes and automobiles, is difficult to detect and nearly impossible to repair by conventional methods. A small, internal crack can quickly develop into irreversible damage from delamination, a process in which the layers separate. This remains one of the most significant factors limiting more widespread use of composite materials.

However, fiber-composite materials can now heal autonomously through a new self-healing system, developed by researchers in the Beckman Institute's Autonomous Materials Systems (AMS) Group at the University of Illinois at Urbana-Champaign, led by professors Nancy Sottos, Scott White, and Jeff Moore.

Sottos, White, Moore, and their team created 3D vascular networks—patterns of microchannels filled with healing chemistries—that thread through a fiber-reinforced composite. When damage occurs, the networks within the material break apart and allow the healing chemistries to mix and polymerize, autonomously healing the material, over multiple cycles. These results were detailed in a paper titled "Continuous self-healing life cycle in vascularized structural composites," published in Advanced Materials.

"This is the first demonstration of repeated healing in a fiber-reinforced composite system," said Scott White, aerospace engineering professor and co-corresponding author. "Self-healing has been done before in polymers with different techniques and networks, but they couldn't be translated to fiber-reinforced composites. The missing link was the development of the vascularization technique."

"The beauty of this self-healing approach is, we don't have to probe the structure and say, this is where the damage occurred and then repair it ourselves," said Jason Patrick, a Ph.D. candidate in civil engineering and lead author.

The vasculature within the system integrates dual networks that are isolated from one other. Two liquid healing agents (an epoxy resin and hardener) are sequestered in two different microchannel networks.

"When a fracture occurs, this ruptures the separate networks of healing agents, automatically releasing them into the crack plane—akin to a bleeding cut," Patrick said. "As they come into contact with one another in situ, or within the material, they polymerize to essentially form a structural glue in the damage zone. We tested this over multiple cycles and all cracks healed successfully at nearly 100 percent efficiency."

Notably, the vascular networks within the structure are not straight lines. In order for the healing agents to combine effectively after being released within the crack, the vessels were overlapped to further promote mixing of the liquids, which both have a consistency similar to maple syrup.

Fiberglass and other composite materials are widely used in aerospace, automotive, naval, civil, and even sporting goods because of their high strength-to-weight ratio—they pack a lot of structural strength into a very lean package. However, because the woven laminates are stacked in layers, it is easier for the structure to separate between the layers, making this self-healing system a promising solution to a long-standing problem and greatly extending their lifetime and reliability.

Fiber-composite laminates are constructed by weaving and stacking multiple layers of reinforcing fabric, which are then co-infused with a binding polymer resin. Using that same process, the researchers stitched in a sort of fishing line, made from a bio-friendly polymer and coined "sacrificial fiber," within the composite. Once the composite was fabricated, the entire system was heated to melt and evaporate the sacrificial fibers, leaving behind hollow microchannels, which became the vasculature for the self-healing system. 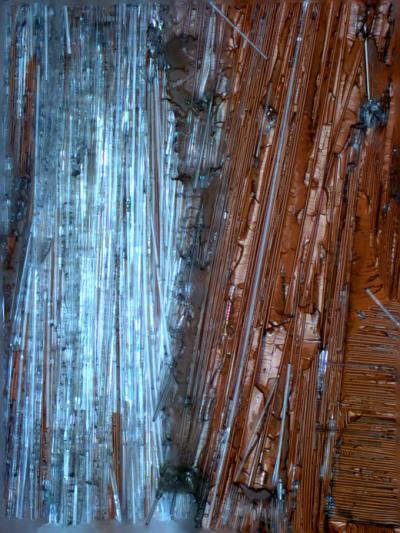 This is an optical microscope image of healed fracture surface showing landscape of ruptured glass fibers (left) and a portion covered with polymerized healing agents (right).