Origami, the ancient art of paper folding, may soon provide a foundation for antennas that can reconfigure themselves to operate at different frequencies, microfluidic devices whose properties can change in operation -- and even heating and air-conditioning ductwork that adjusts to demand.

The applications could result from reconfigurable and reprogrammable origami tubes developed by researchers at three institutions, including the Georgia Institute of Technology. By changing the ways in which the paper is folded, the same tube can have six or more different cross sections. Though the models are now reconfigured by hand, magnetic or electrical actuators could make the changes when the tubes are used in real-world applications.

The tubes can be folded flat for shipping, and made in a range of sizes from the nanoscale up to architectural scale. By developing the mathematical theory behind the folding, the researchers can design tubes with the exact properties needed for electrical engineers, civil engineers or other users. The tubes employ the Miura-ori pattern, one of many unique patterns used in origami. 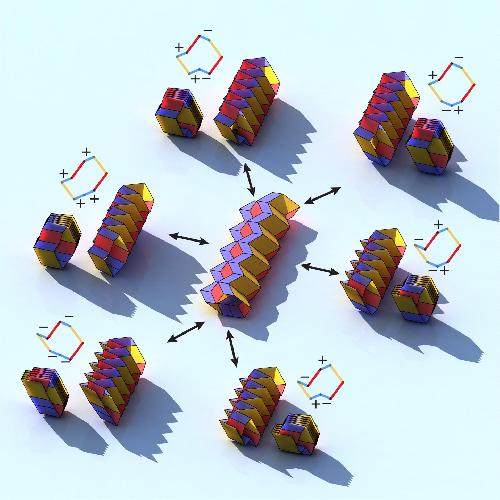 This illustration shows six different configurations that can be produced from a single tube through the redeployment of certain folds. Credit: Credit: Evgueni Filipov, Glaucio Paulino, and Tomohiro Tachi.

"We have developed a new type of origami tube that is reconfigurable to many different cross sections," said Glaucio Paulino, a professor in the School of Civil and Environmental Engineering at the Georgia Institute of Technology. "We have also developed a mathematical theory that goes along with it that allows us to design the tubes and predict how they can be reconfigured or reprogrammed.

The research was supported by the National Science Foundation and reported Jan. 27, 2016 in the journal Proceedings of the Royal Society A. In addition to Paulino, the research team included Evgueni Filipov, a graduate student at University of Illinois at Urbana-Champaign and University of Tokyo professor Tomohiro Tachi.

Fabricating the tubes begins by scoring paper in a device that resembles a computer printer. A special type of cutter in the device follows the researchers' computer program to make cuts partially through the heavy paper by controlling the cutting speed and cutter force. The cuts facilitate folding and gluing the components to make the tubes, which can be folded flat and then expanded.

The innovation by the research team was to design folds have two options. One fold might create a section of paper that bulges out of the tube, like a mountain range - and alternatively can create a valley in the tube. These variations allow the different configurations to be selected, each producing a slightly different cross section.

Among the potential applications are reconfigurable tubes that could carry electromagnetic energy and function as antennas. Different folds would allow them to operate at different frequencies, an application with potential military and commercial interest.

"Your phone has an antenna designed to work at a specific frequency," explained Paulino. "If you needed the phone to work at a different frequency, right now you would need a different device. With this reconfigurable capability, we could obtain different antenna configurations in the same device with the same origami tube antenna."

Other applications could range from tiny microfluidic tubes able to switch liquids, to engineering and architectural-scale applications in ductwork, piping and even structures to provide shade for buildings during hot parts of the year.

Though they're made of paper, the origami tubes can be designed to be quite strong and to support heavy loads, while being easily foldable when not in use. In practical applications, the tubes would be made from flexible polymers or other materials.

Origami structures have been made for a long time, but what Paulino his collaborators bring to the field is a mathematical understanding and theory that allows them to apply an engineering approach to the development of the new tube configurations.

"We have a complete mathematical theory that allows us to see how many cross sections each tube would allow," he said. "The theory is very powerful. We now have the math, the theory and the prototypes to demonstrate the ideas. We can program these polygonal tubes to create almost any shape."

In future work, Paulino and his collaborators would like to establish an actuation mechanism to redeploy the tubes when needed. The system could be operated using magnetized structures, or by electronic means.

"We are working toward coupling these reconfigurable capabilities with a programmable function that would allow us to activate the folds remotely," he said. "We would be able to switch among the different configurations at will."

In September 2015, the same research team reported developing a new "zippered tube" origami configuration that makes paper structures stiff enough to hold weight yet able to fold flat for easy shipping and storage. Their method could be applied to other thin materials, such as plastic or metal, to transform structures ranging from furniture and buildings to microscopic robots.