A research team that includes a physics professor at Indiana University-Purdue University Indianapolis (IUPUI) has recorded a drastically reduced measurement of the Casimir effect, a fundamental quantum phenomenon experienced between two neutral bodies that exist in a vacuum.

For more than 60 years, scientists have studied the peculiar electromagnetic interaction between two neutral objects. The Casimir effect, a long-standing point of study in quantum physics, refers to this unavoidable physical force that exists between the objects, even when those objects are placed in an environment void of any external forces.

This recent study, published online on Sept. 27 in the Nature Communications, breaks new ground in the standard measurements of the Casimir effect known to scientists. The experiment used nanostructured (micro-ridged) metallic plates to suppress the force to a much lower rate than ever recorded previously, said Ricardo Decca, Ph.D., professor of physics at IUPUI.

"These results build upon our expertise in the measurement of the Casimir effect. At IUPUI, we have the most precise determinations of this interaction," said Decca, one of nine co-authors in the discovery. He also is the director of the graduate program in the Department of Physics at IUPUI and co-director of the Nanoscale Imaging Center.

"Based on previous knowledge, the attraction discovered here should not have decreased as much as it did. There was still an attraction measured but not near the levels typically found," Decca said.

He likened the experiment to "going fishing, where we caught a fish nobody ever expected to be there." 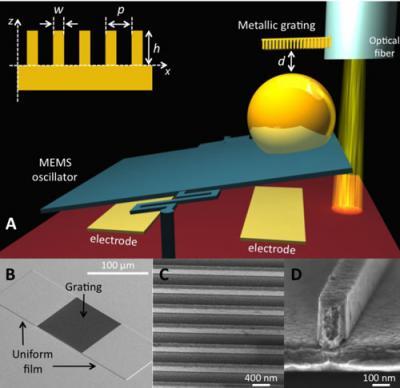 This is a schematic drawing of the experimental configuration used to measure the Casimir force between a gold-plated sphere and a nanonstructured grating.

Theoretical physicists differ on whether true repulsion (reversal of the attraction from positive to negative) can ever be achieved. However, the study could change scientists' understanding of electromagnetism and lead to the creation of surfaces with less friction.

The reduced attraction was measured using a metal-coated sphere attached to an oscillator mounted above two electrodes. A metallic, nanostructured grating was attached to an optical fiber, and the interaction occurred as the sphere and grating were moved closer to one another. SEE FIGURE.

The experiment revealed the Casimir pressure was reduced at more than twice the expected levels when the sphere and the grating surface were separated from one another by up to 500 nanometers.

Although excited for the results thus far, the research team noted in the publication that much more analysis and study is needed to determine to true breadth of their impact. The results, however, open up new possibilities in the study of an often-debated phenomenon and could lead to more scientific activity in this field. 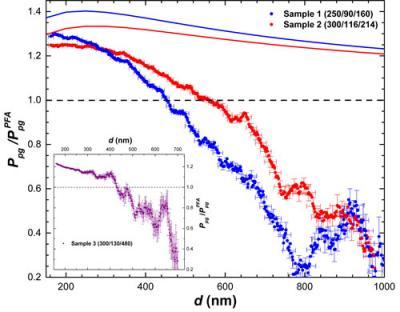 The experimental data, noted by the red and blue lines, show a clear departure from normalized pressure ratings in a typical Casimir force measurement.The observed fluctuations on the experimental data originate from the rolling average. The effect of points far from the mean is extended over the bin where the average is performed. Inset: characteristic results for samples made by sputtering of Au onto hydrogen silesquioxane structures.