AUGUSTA, Ga. – Examining the chin and upper and lower abdomen is a reliable, minimally invasive way to screen for excessive hair growth in women, a key indicator of too much male hormone, researchers report.

"We wanted to find a way to identify this problem in women that was as non-intrusive and accurate as possible," said Dr. Ricardo Azziz, reproductive endocrinologist and President of Georgia Health Sciences University.

"We believe this approach is approximately 80 percent accurate and will be less traumatic for women in many situations than the full body assessments currently used," said Azziz, corresponding author of the study published in the journal Fertility and Sterility.

In addition to cosmetic concerns, women with excessive hair growth, or hirsutism, are often overweight with menstrual dysfunction and diminished fertility related to problems with ovulation. Symptoms can begin in childhood. Hirsutism also is highly correlated with polycystic ovary syndrome, or PCOS, a major cause of infertility as well as a significant risk factor for diabetes and heart disease. PCOS is a subcategory of androgen excess or excess male hormone, the most common hormone disorder, which affects about 10 percent of women.

"If you do the math, at least half the women with excess hair growth will be at increased risk for insulin resistance, metabolic dysfunction, diabetes and heart disease. That is why this is such an important marker," Azziz said.

He calls hirsutism the single most defining feature of androgen excess disorder, such as PCOS. "Excessive hair growth strikes at the femininity of women. We are talking about terminal hairs that are harder, more pigmented and thicker than the usual soft hairs you see." In fact, Azziz and his colleagues have previously published studies indicating hirsutism is second to obesity in negatively impacting a woman's quality of life. "You cover yourself up at the beach. You don't want your partner to see you nude. It can be very damaging to your psychosocial well-being," he said.

The most widely used assessment today is about 50 years old and includes nine body areas: the lip, chin, chest, upper and lower abdomen, upper arm, thigh and upper and lower back. Many women consider this full body check invasive and it can be unwieldy for scientists doing large epidemiologic studies, Azziz said. 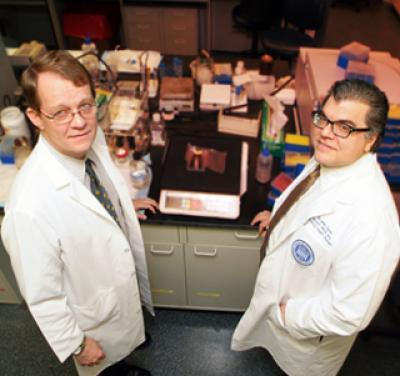 Examining the chin and upper and lower abdomen is a reliable, minimally invasive way to screen for excessive hair growth in women, a key indicator of too much male hormone, according to Georgia Health Sciences University Researchers.

For this study, Azziz examined 1,116 female patients at the University of Alabama at Birmingham from 1987-2002 and 835 female patients at Cedars-Sinai Medical Center in Los Angeles from 2003-09 with symptoms of androgen excess. Study authors note the method needs further evaluation, including whether it can be used to monitor success of hirsutism treatment.

The hirsutism study is part of Azziz's ongoing research of the problems related to androgen excess and PCOS.

Diagnosis is a complex process that can include a history and physical exam, quantifying hair growth, measuring male hormone levels as well as an oral glucose tolerance test to determine the degree of insulin excess and diabetes risk, said Azziz's collaborator, Dr. Lawrence C. Layman, chief of the GHSU Section of Reproductive Endocrinology, Infertility and Genetics. It also requires ruling out syndromes or disorders with similar symptoms such as non-classic congenital adrenal hyperplasia, which Azziz's team helped differentiate. Current therapies, such as birth control pills to prevent androgen synthesis and the blood pressure medicine, spironolactone, a diuretic that also blocks androgen receptors, treat symptoms rather than causes, the researchers said.

To improve diagnosis and treatment, they along with Azziz's long time colleagues Dr. Yen-Hao Chen, biomedical scientist, and Saleh Heneidi, research associate, are expanding the GHSU Tissue Repository for Androgen-Related Disorders. In the past two decades, Azziz's team has collected more than 50,000 samples – including fat, blood, urine, plasma and DNA – from about 7,000 women. Having this variety of samples, particularly from the same woman, enables the scientists to better put together the pieces that contribute to the syndrome, Chen said.

"These women have been to a lot of doctors and a lot of clinics and they know that the medical knowledge out there is limited so they are willing to help further research in this field," Azziz said of the significant patient contributions.

Azziz is collaborating with scientists at Cedars-Sinai to identify the multiple genes responsible, which they suspect also have roles in insulin signaling, inflammation and androgen production. "We know that a significant portion of women with PCOS have an inherited defect of their insulin action which, along with other genetic defects, results in the syndrome," he said. "If we can find the genes that are abnormal, we may be able to find drugs to target those genes."

His GHSU team is also examining signaling abnormalities in fat – a determinant of insulin resistance – in PCOS patients. "Clearly fat in PCOS behaves differently than fat in healthy women of the same weight," Azziz said. They suspect the abnormal signals are partially to blame for the abnormal response to insulin. They also suspect the signaling abnormalities are good treatment targets.