In a new camera trap survey in the world's most biologically diverse landscape, researchers for the Wildlife Conservation Society have identified more individual jaguars than ever before.

Using technology first adapted to identify tigers by stripe patterns, WCS conservationists have identified 19 individual jaguars by spot patterns in the rainforests of Bolivia, a record number for a single camera trap survey in the country. The animals were identified from a total of 975 photographs, a record number of images due to the use of digital cameras as opposed to camera traps that use film.

The images come from the Alto Madidi and Alto Heath, a region at the headwaters of the Madidi and Heath Rivers inside Bolivia's outstanding Madidi National Park. The survey also included Ixiamas Municipal Reserve, created following a previous WCS survey in 2004 along the Madidi River, which revealed a high abundance of jaguars and other species such as white-lipped peccaries, spider monkeys, and giant otters.

"We're excited about the prospect of using these images to find out more about this elusive cat and its ecological needs," said WCS Conservationist Dr. Robert Wallace. "The data gleaned from these images provide insights into the lives of individual jaguars and will help us generate a density estimate for the area."

The study is noteworthy in its use of digital camera traps replacing the traditional film units used in the past. The cameras are strategically placed along pathways in the forest and especially the beaches of rivers and streams for weeks at a time, snapping pictures of animals that cross an infrared beam. Now, researchers returning to the traps can download the images in seconds, rather than waiting days for film to develop. Before embarking on second field trip to the even more remote Heath River, Bolivian jaguar field biologist Guido Ayala noted that "series of digital images also capture more data than traditional film." 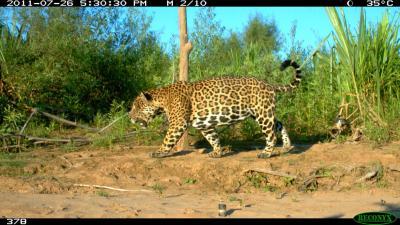 "The preliminary results of this new expedition underscore the importance of the Madidi landscape to jaguars and other charismatic rainforest species," said Dr. Julie Kunen, Director of WCS's Latin America and Caribbean Program. "Understanding the densities and ranging habits of jaguars is an important step in formulating effective management plans for what is arguably the most biodiverse landscape on the planet."

Madidi National Park is one of the top tourist attractions in Bolivia and is the centerpiece of a continuous chain of six national protected areas in northwestern Bolivia and southeastern Peru, one of the largest such complexes in the world.

WCS works to develop local capacity to conserve the landscape from a variety of threats, including the negative environmental impacts from poorly planned development such as road construction, hydroelectric projects, logging, and agricultural expansion. WCS also works to improve local livelihoods through community enterprises.

WCS has worked to protect jaguars for decades and launched the WCS Jaguar Conservation Program in 1999 to assess the needs of jaguars in the wild and to minimize potential conflicts with humans. 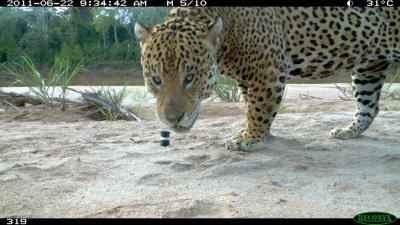