The tsunami that followed on the heels of the March 11, 2011, earthquake in Japan produced as much as 25 million tons of debris. Much of this debris was swept into the ocean. What stayed afloat drifted apart under the influence of winds and currents, most of it eastward. Predicted to reach the West Coast of the United States and Hawaii within the coming years, the debris' composition and how much is still floating on the surface are largely unknown. One thing is certain: the debris is hazardous to navigation, marine life, and when washed ashore, to coastlines.

To track where this debris is headed, a team of scientists and conservationists from the University of Hawaii at Manoa and at Hilo, the Scripps Institution of Oceanography, and the Ocean Recovery Alliance created a plan shortly after the tsunami to survey the debris field and mark it with satellite-tracked drifting buoys. This drifter array would then be used to monitor the debris' movement remotely and provide warnings.

This survey has now been partly realized. The team organized end of November an expedition from Honolulu to Midway Atoll and beyond. Horizon Lines LLC shipped the equipment from California to Hawaii and Nobeltec provided navigational software for the expedition. The team had only the projections of a computer model to go on in search of the debris. The model, based on the trajectories of historical drifters, predicted at the outset of the expedition that the debris was heading toward Midway and Papahanaumokuakea Marine National Monument, arriving there as early as this winter. The model's trajectory had been confirmed end of September 2011 by the Russian Sail Training Ship Pallada, which reported the edge of the debris field 250 miles northwest of Midway, and picked up 100 miles further on, a 20-foot boat from Fukushima, which had been lost during the tsunami. 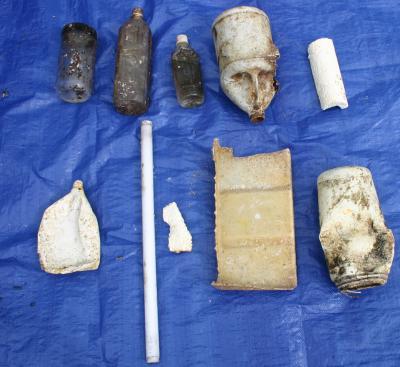 These are some isolated floating objects found during the expedition. They are not likely from the tsunami.

The expedition has successfully completed the survey of the probable pathways of tsunami debris moving toward the Northwest Hawaiian Islands. Among other tasks, 11 drifting buoys, designed to simulate the motion of different types of debris, were deployed in a line between Midway and the leading edge of the tsunami debris field. The data from these satellite-tracked drifters, used in conjunction with computer models, now allow the movement of the debris field to be monitored remotely, giving scientists and operational agencies a better awareness of the status of the debris field and of the region's current system Moreover, 400 numbered wooden blocks were deployed along the route, often near floating objects. If boaters, fishermen and beachgoers find these blocks and contact the scientists by the information on the blocks, they will also increase understanding of the motion of debris and currents in this remote region.

Among the most important results of the expedition was the recognition that tsunami debris has recently not advanced towards Midway, but instead has been flowing eastward well to the north of the atolls. Analysis of the ocean-current field shows why: for the past weeks, the general flow around all Hawaiian Islands has been from the southwest, producing a front located 300-400 miles northwest of the Midway. This front and associated northeastward jet keep the tsunami debris north of the islands...at least for the time being. 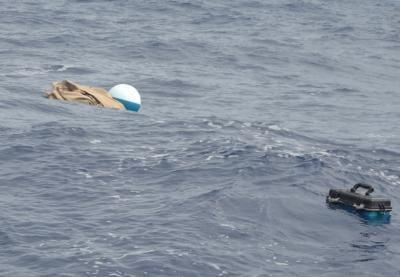 A drifting buoy is deployed.

Although this flow has prevented tsunami debris from approaching the islands, it carries a lot of "ordinary" debris (mainly old plastic) from the Garbage Patch, located between Hawaii and California. The expedition documented 175 such objects, many photographed and collected for more thorough laboratory examination. These sightings of ordinary debris match reports at Kure and Midway Islands, where in recent weeks much debris has been washing up on the southern beaches of the atolls; some of these items could be tracked to the main Hawaiian Islands. Moreover, systematic examination of these samples (including water samples) with the Geiger counter has not revealed any significant radiation. 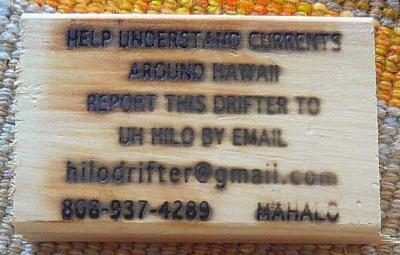 This is a numbered wooden block. If found please contact hilodrifter@gmail.com.