With record levels of student stress reported in a recent UCLA survey, can a simple stress-reducing meditation technique be a viable solution?

The percentage of students in the UCLA survey reporting good or above-average high school emotional health dropped from 55.3 percent in 2009 to 51.9 percent in 2010. This marks the lowest level within the past 25 years.

Dr. Charles Elder, MD, lead author of the TM study, and investigator at Kaiser Permanente Center for Health Research, emphasized the important implications of the findings on reduced stress. "It is vital that we start addressing the high levels of emotional stress being reported by high school and college students. Decreased stress can have a positive impact on mental health, and can also reduce the risk for hypertension, obesity, and diabetes—major risk factors for heart disease," explained Dr. Elder. 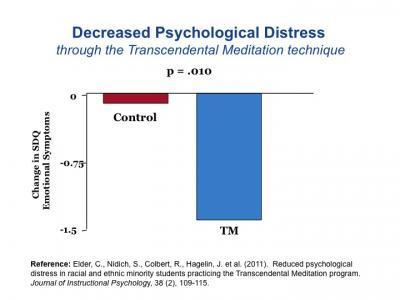 This graph shows a 36 percent reduction in psychological distress in 106 at-risk racial and ethnic minority students practicing the Transcendental Meditation technique compared to controls over a period of 4 months (p=.010). Significant decreases were also found in trait anxiety and depressive symptoms.

"These new findings on reduced stress, along with the recent research on academic achievement gains, hold tremendous promise for public education," said Sanford Nidich, EdD, principal investigator, and professor of education at Maharishi University of Management. "There is a growing body of evidence showing Transcendental Meditation to be an easy to implement, value-added educational program that promotes emotional health and increases academic achievement in at-risk students," said Dr. Nidich.

According to James Dierke, 2008 National Association of Secondary School Principals—National Middle School Principal of the Year, "Stress is the number one enemy of public education, especially in inner-city schools. It creates tension, violence, and compromises the cognitive and psychological capacity of students to learn and grow. The TM/Quiet Time program is the most powerful, effective program I have come across in my 39 years as a public school educator for addressing this problem. It is nourishing children and providing them an immensely valuable tool for life. It is saving lives."