DNA ANALYSIS: A new and astonishing chapter has been added to North American prehistory in regards to the first hunters and their hunt for the now extinct giant mammoth-like creatures – the mastodons. Professor Eske Willerslev's team from the Centre for GeoGenetics, University of Copenhagen, has in collaboration with Michael Waters' team at the Center for the Study of the First Americans, University of Texas A&M, shown that the hunt for large mammals occurred at least 1,000 years before previously assumed.

This new study concludes that the first-known hunters in North America can now be dated back at least 14,000 years. The results are published today in the internationally renowned scientific journal Science.

"I am sure that especially the Native Americans are pleased with the results of the study. It is further proof that humans have been present in North America for longer than previously believed. The "Clovis First" theory, which many scientists swore to just a few years back, has finally been buried with the conclusions of this study," says Professor Eske Willerslev, director of the Centre for GeoGenetics at the Natural History Museum of Denmark, University of Copenhagen. 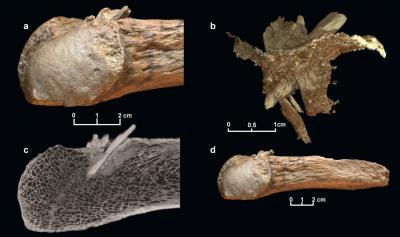 This figure shows a mastodon rib with the embedded bone projectile point. (A) Closeup view. (B) Reconstruction showing the bone point with the broken tip. The thin layer represents the exterior of the rib. (C) CT X-ray showing the long shaft of the point from the exterior to the interior of the rib. (D) The entire rib fragment with the embedded bone projectile point.

It is the finding and analysis of a tip from a man-made projectile point (spearhead) gathered from the remains of a mastodon that is behind the rewriting of North American prehistory. The spearhead, which itself was carved out from a mastodon-bone, was found at the Manis site in the state of Washington when archaeologists excavated a mastodon in the late 1970s.

However, 30 years would pass before a team of researchers was able to put a date on the spearhead and establish the identity of both the bone and the spearhead that had been embedded into the rib of the defeated mastodon. This was done through, amongst other things, DNA analysis, protein sequencing, advanced computer technology, Carbon-14 dating as well as comparisons with other mastodon findings in North America, for instance in the state of Wisconsin.

"Our research now shows that other hunters were present at least 1,000 years prior to the Clovis culture. Therefore, it was not a sudden war or a quick slaughtering of the mastodons by the Clovis culture, which made the species disappear. We can now conclude that the hunt for the animals stretched out over a much longer period of time. At this time, however, we do not know if it was the man-made hunt for the mastodons, mammoths and other large animals from the so-called mega-fauna, which caused them to become extinct and disappear. Maybe the reason was something complete different, for instance the climate," states Professor Eske Willerslev.

The Road to America

It is no more than three years ago that Eske Willerslev and his research team established that the first traces of humans in North America are approximately 14,340 years old, and that the current Native Americans in the USA are descendants of these migrants who came from Asia. This was done using Carbon-14 dating and DNA analysis of human remains found in caves in the state of Oregon.

Professor Eske Willerslev has been able to add a new chapter to North American prehistory by mapping the now first-known hunters in this part of the world.

The results are published today in the internationally renowned scientific journal Science. 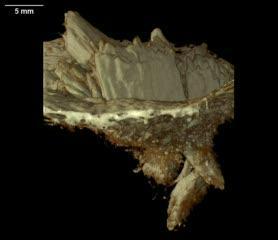 High-resolution X-ray computed tomography (CT) scanning reveals a dense object made from bone embedded in the mastodon rib. The object is shaped to a point, indicating it is likely a spear head. The point penetrated 2.15 cm into the rib, after which the the tip broke after entering the rib and separated from the main shaft. The combined length of the point fragment (tip length plus the length of the embedded and external shaft piece) is 3.5 cm.