Quack medicines, insect immigrants, and what eats what among secrets revealed by DNA barcodes

The newfound scientific power to quickly "fingerprint" species via DNA is being deployed to unmask quack herbal medicines, reveal types of ancient Arctic life frozen in permafrost, expose what eats what in nature, and halt agricultural and forestry pests at borders, among other applications across a wide array of public interests.

The explosion of creative new uses of DNA "barcoding" -- identifying species based on a snippet of DNA -- will occupy centre stage as 450 world experts convene at Australia's the University of Adelaide Nov. 28 to Dec. 3.

Indeed, notes Malaysian researcher Muhammad Sharir Abdul Rahman, one fraudster in his country treated rubber tree wood with quinine to give it a bitter taste similar to Eurycoma longifolia -- a traditional medicine for malaria, diabetes and other ailments.

A library of DNA barcodes for Malaysia's 1,200 plant species with potential medicinal value is in development, eventually offering "a quick one step detection kit" to reduce fraud in the lucrative herbal medicine industry, says Mr. Sharir.

His concerns resonate in other countries around the true contents of certain brands of ginseng and other products.

DNA barcode libraries are under construction for the medicinal plants of several other nations as well, including South Africa, India and Nigeria.

From the woolly rhino to plants and mushrooms, scientists using DNA are deciphering what lived in the ancient Arctic environment, creating new insights into climate change in the process.

"DNA barcoding" analyses of cylinders of sediment cored from Arctic permafrost ranging in age from 10,000 to several hundred thousand years have shed light on past animal and fungal distributions and allowed researchers to infer which plant species likely co-existed.

DNA analyses of permafrost sediment 15,000 to 30,000 years old from northeastern Siberia revealed a grassland steppe plain during the glacial period supporting a diverse mammal community, including bison, moose and the DNA of the rare woolly rhino, the first ever found in permafrost sediments. 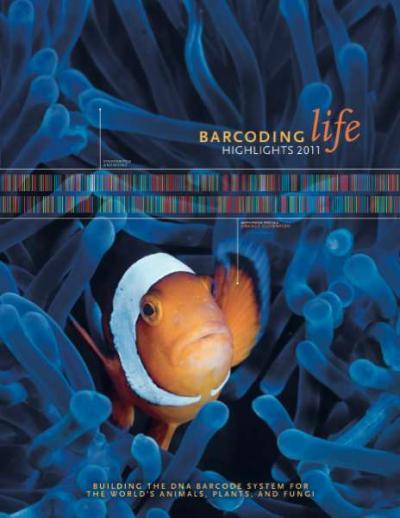 This is the cover of the report: "Barcoding Life Highlights 2011."

Says University of Oslo-based researcher Eva Bellemain, who will present project BarFrost (Barcoding of Permafrost): "In the Arctic, fossils are scarce and time-consuming to find and analyze. However, DNA is one tough molecule. It had to be in order to serve its purpose the last billion years and more. Incredibly, it can linger in soil for tens of thousands of years and stay relatively intact."

The technology can even distinguish species contained in the gut or dung of animals, revealing what eats what. University of Adelaide researcher Hugh Cross, for example, will detail his investigation into the diet of Australia's fast-growing, 1 million-strong population of wild camels, which severely impact the country's ecology.

Introduced in the 1800s as pack animals, Australia's wild camels eat an estimated 80% of available plant species in their range.

Says conference organizer David Schindel, Executive Secretary of the CBOL, based at the Smithsonian Institution, Washington, D.C.: "Biologists used to sit and wait and watch to learn how food webs work in Nature and what happens when they collapse. Now they can process stomach contents and dung samples to get the complete picture in a few hours."

Until now, border inspection to keep agricultural pests, disease-carrying insects and invasive species from entering a country has been a hit-and-miss effort. Barcoding offers a tool to get same-day answers for accepting or rejecting imports, an issue of acute economic importance to Australia and New Zealand.

With European Union funding, a consortium of 20 universities, research institutes, and other organizations are partners in Project QBoL (Quarantine Barcode of Life, www.qbol.org), developing a library of DNA barcodes to help quickly identify common invasive organisms that authorities want to stop at national borders.

With the new DNA barcode tool, inspectors can more easily and surely identify and thus prevent the entry of invading pests including bacteria, fungi, fruit flies, other insects, nematodes, viruses, plants and other organisms. Trade of timber cut from endangered species may also be slowed with barcodes to identify wood and lumber products.

Hundreds of topics in Adelaide

"From tea to tuna, DNA identification is entering everyday life," remarked Jesse Ausubel, chair of the International Barcode of Life (iBOL) initiative, a 6-year program now in midstream of a group of the most active labs building the barcode library.

Adds Dr. Schindel: "Like Google and Wikipedia, DNA barcoding scarcely existed a decade ago, and now we are a vibrant community built on 21st century scientific tools."

"DNA barcoding is the express lane to solving many of Nature's mysteries relevant to a spectrum of national interests."

He notes that scores of additional topics will be explored in Adelaide, spanning health, cultural and environmental protection, such as: 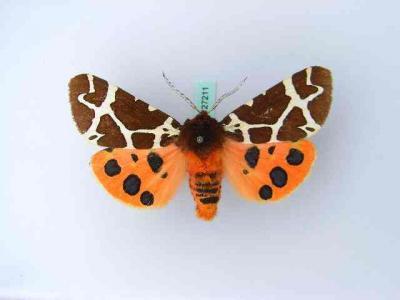 Completing regional inventories. For most applications, a regional barcode library answers the question "what organism is this?" Researchers recently completed a library that characterizes 1,264 of the 1,338 species (94 percent) of butterflies and large moths of Germany. Local agricultural pests and invasive species can now be identified by DNA and distinguished from non-harmful relatives. In Japan, botanists established a library of rbcL barcodes for 689 of the 783 local ferns and horsetails (94 percent), creating a naming tool that works for all life stages, including gametophyte forms often indistinguishable by appearance.

The blood meals of biting insects

Resembling a common housefly, the African tsetse fly transmits Human African trypanosomiasis, AKA sleeping sickness, to people and animals. One of the world's most dangerous disease vectors, it spread the 2008 epidemic in which 48,000 Ugandans died. And the annual economic impact is estimated at US$4.5 billion, with around 3 million cattle killed every year.

Scientists are using DNA barcodes to identify tsetse fly species and their prey based on analysis of the insect's blood meals, unravelling the relationship between hosts and vectors.

By developing the barcode library, tools and ability to readily distinguish species of tsetse flies, mosquitos, ticks and other vectors of diseases such as malaria, leishmaniasis, schistosomiasis, Japanese encephalitis, and Lyme disease, scientists can map risk areas more efficiently and alert authorities to the spread of health threats.

According to scientists, over 1 billion ornamental fish -- comprising more than 4,000 freshwater and 1,400 marine species -- are traded internationally each year, a US $5 billion industry growing annually at 8 percent.

Fungi are a taxonomic group of many major, distinct evolutionary lineages, ranging from mushrooms to molds. Although two species of fungi can be more distantly related than a fish is related to an insect, all fungi are classified in the same group.

Researchers at the conference are expected to announce the selection of the barcode region for fungi. The standard barcode regions used for animals and plants is not effective for fungi and an international working group has been conducting comparative analyses of candidate regions for two years. The decision is expected to open the floodgates to fungal barcoding research.

A project on indoor fungi that cause human health problems will also be unveiled in Adelaide, showing the enormous potential for fungal studies.

Australian scientist Wieland Meyer argues that, given steadily increasing invasive fungal infections, inadequate identification, limited therapies and the emergence of resistant strains, "there is an urgent need to improve fungal identification" to improve the successful treatment.

Fungi also provide humanity with food and antibiotics and the services of fermentation and decay. DNA-based taxonomy promises to revolutionize understanding of fungal diversity and connect the their life stages.

Barcoders aim to create a library of at least 10,000 fungal species by 2015, especially for indoor fungi, for basidiomycetes (the "higher fungi") and for pathogens of agriculture and forestry.

The ecosystem service of plant pollination by insects has a global value estimated at more than $400 billion a year.

Facilitated by the International Barcode of Life (iBOL), barcoders are surveying long-term population trends by assembling barcode libraries for all bees and other important pollinators -- flies and beetles. In combination with campaigns to barcode moths, butterflies and birds, they will provide the database needed to assess the state of pollinator communities worldwide.

Scientists in Southern California and elsewhere are pioneering barcodes to assess freshwater marine water quality and its impact on marine life in, sand, sediment, and rocks or in mud in rivers and offshore.

Traditionally after collecting a bulk water sample, taxonomists must identify by sight several thousand invertebrates, a process requiring months and thousands of dollars. DNA barcodes enable them to analyze bulk samples in a fraction of the time at a fraction of the cost.

Similar projects underway in Korea, Iraq, Belgium and the Baltic region will be presented in Adelaide.

DNA barcoding is emerging as the tool of choice for monitoring water quality, DNA barcode libraries of aquatic insects under construction. New technologies are being developed and tested that will allow faster and more complete analyses of entire biological communities in streamwater on 'DNA microchips' and through next-generation sequencing.

Says Dr. Schindel: "It used to take weeks or months to analyze the organisms in streams to determine water quality. Now it takes hours at a fraction the cost."

Scientists in Adelaide will also advance progress towards an international library of barcodes for 500,000 plant, animal and fungi species within five years - "a barcode blitz" that could transform biology science. The Barcode of Life Database includes more than 167,000 reliably named and provisional species today. Butterflies and moths are the largest well-analyzed group so far, with over 60,000 named and provisional species -- much of the world's estimated total of 170,000.

Gold mines for barcoding are the world's museums and herbaria, where countless species specimens are concentrated and organized thanks to great investments of time and dollars.

A year ago, a team of five Biodiversity Institute of Ontario researchers conducted a barcode blitz in the Australian National Insect Collection. Focusing on moths and butterflies for 10 weeks, they processed over 28,000 specimens representing over 8,000 species and 65 per cent of the country's 10,000 known insect species. Meanwhile at the Smithsonian Institution's National Museum of Natural History, another team recently barcoded over 3,000 frozen bird tissues from over 1,400 species, adding more than 500 new species to the world avian DNA library, now covering about 40% of known birds.

New techniques for DNA extraction are bringing older and older specimens in natural history museums into the age range where DNA barcoding can be effective. These breakthroughs will open up new research questions about changes in species over the past centuries of human impact on natural populations.

The Munich Botanical Garden is the latest institution with an important collection of authoritative reference specimens opening its collection to a DNA barcode blitz. 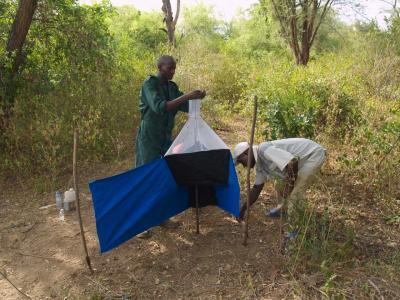 Source: Consortium for the Barcode of Life (CBOL)