Putting the body back into the mind of schizophrenia

A study using a procedure called the rubber hand illusion has found striking new evidence that people experiencing schizophrenia have a weakened sense of body ownership and has produced the first case of a spontaneous, out-of-body experience in the laboratory.

These findings suggest that movement therapy, which trains people to be focused and centered on their own bodies, including some forms of yoga and dance, could be helpful for many of the 2.2 million people in the United States who suffer from this mental disorder.

The study, which appears in the Oct. 31 issue of the scientific journal Public Library of Science One, measured the strength of body ownership of 24 schizophrenia patients and 21 matched control subjects by testing their susceptibility to the "rubber hand illusion" or RHI. This tactile illusion, which was discovered in 1998, is induced by simultaneously stroking a visible rubber hand and the subject's hidden hand.

"After a while, patients with schizophrenia begin to 'feel' the rubber hand and disown their own hand. They also experience their real hand as closer to the rubber hand." said Sohee Park, the Gertrude Conaway Vanderbilt Chair of Psychology and Psychiatry, who conducted the study with doctoral candidate Katharine Thakkar and research analysts Heathman Nichols and Lindsey McIntosh.

“Healthy people get this illusion too, but weakly,” Park continued. “Some don’t get it at all, and there is a wide range of individual differences in how people experience this illusion that is related to a personality trait called schizotypy, associated with psychosis‑proneness.”

Body ownership is one of two aspects of a person's sense of self awareness. (The other aspect is self-agency, the sense that a person is initiating his or her own actions.) According to the researchers, the finding that schizophrenia patients are more susceptible to the rubber hand illusion suggests that they have a more flexible body representation and weakened sense of self compared to healthy people.

"What’s so interesting about Professor Park’s study is that they have found that the sense of bodily ownership does not diminish among patients with schizophrenia, but it can be extended to other objects more easily,” observed David Gray, Mellon assistant professor of philosophy at Vanderbilt, who is an expert on the philosophy of the mind. He did not participate in the study but is familiar with it. “Much of the literature concerning agency and ownership in schizophrenia focuses on the sense of lost agency over one’s own movements: But, in these cases, the sense of ownership is neither diminished nor extended.” 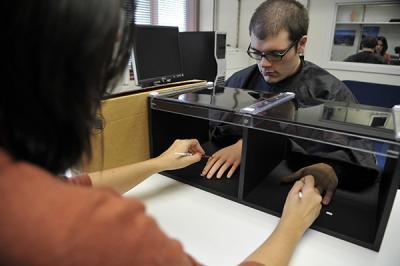 Before they began the procedure, the researchers gave participants a questionnaire to rate their degree of schizotypy: the extent to which they experience perceptual effects related to the illusion. The researchers found that the individuals who rated higher on the scale were more susceptible to the illusion.

The researchers gauged the relative strength of the RHI by asking participants to estimate the position of the index finger of their hidden hand on rulers placed on top of the box that conceals it before and after stimulation. The stronger the effect, the more the subjects' estimate of the position of their hidden hand shifted in the direction of the rubber hand. Even the estimates of those who did not experience the effect subjectively shifted slightly.

The rubber hand illusion also has a physiological signature. Scientists don't know why, but the temperature of the hidden hand drops by a few tenths of a degree when a person experiences the illusion. "It's almost as if the hand is disowned and rejected, no longer part of the self," Park commented.

"Anomalous experiences of the self were considered to be core features of schizophrenia decades ago but in recent years much of the emphasis has been on cognitive functions such as working memory," said Park.

According to the psychologist, out-of-body experiences and body ownership are associated with a particular area in the brain called the temporoparietal junction. Lesions in this area and stimulation by strong magnetic fields can elicit out-of-body experiences. The new study suggests that disorders in this part of the brain may also contribute to the symptoms of schizophrenia.

The relationship between schizophrenia and body ownership may help explain the results of a German study published in 2008 that found a 12-week exercise program reduced the symptoms and improved the behavior of a small group of patients with chronic schizophrenia when compared to a control group that did not exercise. The study also found that the exercise increased size of the patients' hippocampus slightly – a smaller-than-normal hippocampus is a well established symptom of schizophrenia.

"Exercise is inexpensive and obviously has a broad range of beneficial effects, so if it can also reduce the severity of schizophrenia it is all to the good," said Park. These findings suggest that focused physical exercise which involves precise body control, such as yoga and dancing, could be a beneficial form of treatment for this disorder.