Scientists from the University of Leicester and University of California Los Angeles (UCLA) have announced a breakthrough advance in tackling dangerous 'bad' cholesterol in the body.

They have filed two patents for developing targeted drugs that would act as a catalyst for lowering levels of 'bad' cholesterol.

Two research papers published by the academics enhance the understanding of the regulation of low-density lipoprotein (LDL) or "bad" cholesterol.

In the body, cells in the liver produce an LDL receptor that binds LDL and removes it from the blood, thereby lowering cholesterol levels.

However, the LDL receptors can be hindered from their mission. 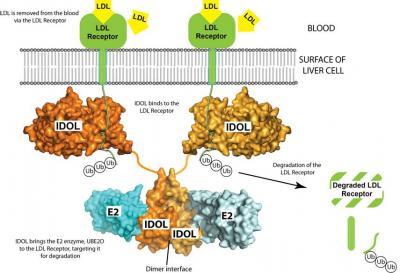 This is an illustration of how the enzyme IDOL binds with LDL receptors, degrading them and hampering their ability to bind with bad cholesterol.

The scientists found that an enzyme called IDOL has been shown to play a key and specific role in the ability of the LDL receptor to bind with 'bad' cholesterol. Therefore targeting the enzyme with drugs would assist the LDL receptors in lowering circulating cholesterol in humans.

Professor John Schwabe, Head of Biochemistry at the University of Leicester, said: "Development of a drug that interferes with IDOL's activity could help lower levels of LDL. Our research has greatly enhanced our understanding of this important process."

Prof John Schwabe, Dr Ben Goult and Dr Louise Fairall at the University of Leicester in collaboration with the University of California Los Angeles (UCLA) published their research in Genes & Development and the Proceeds of the National Academy of Science (PNAS) . The research in the UK was funded by the Wellcome Trust and in the US by NIH and the National Heart Foundation of Australia Overseas Fellowship.

The study in Genes & Development announced the first atomic structural information on IDOL and identified the E2 ligase, UBE2D that works with IDOL to degrade the LDL receptor.

In the second research article published in PNAS, the team elucidated the molecular basis for the stringent specificity of IDOL for the LDL receptor.

Professor Schwabe added: "Remarkably, IDOL only targets three proteins for degradation (all lipoprotein receptors) and this research paper greatly enhances our understanding of this specificity and identifies key residues involved in mediating this interaction.

"A potential future drug that targets IDOL could be prescribed in conjunction with statin drugs, which also cut cholesterol levels by increasing production of the LDL receptor and these two studies make considerable headway towards this. "

The universities have filed 2 patents related to the research findings.