Largest bird alters its foraging due to climate change

Paris/ Leipzig. Wandering albatrosses have altered their foraging due to changes in wind fields in the southern hemisphere during the last decades. Since winds have increased in intensity and moved to the south, the flight speed of albatrosses increased and they spend less time foraging. As a consequence, breeding success has improved and birds have gained 1 kilogram. These are the results of the study of an international research team published in the latest issue of the Science journal. However, these positive consequences of climate change may last short if future wind fields follow predictions of climate change scenarios, researchers warn.

For this study, biologists had combined data on the duration of foraging trips and breeding success over the last 40 years, as well as foraging and body mass over the last 20 years of wandering albatross (Diomedea exulans) breeding in Crozet Islands. This archipelago lies approximately in the heart of the southern Indian Ocean (halfway between Madagascar and Antarctica). It belongs to the French Southern Territories and it is located in the windiest part of the Southern Ocean. The new findings are the result of an international research team from the French National Centre for Scientific Research (CNRS-CEBC) and the German Helmholtz-Centre for Environmental Research (UFZ). 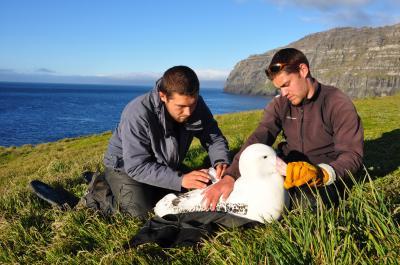 Researchers on Crozet fit a transmitter on a wandering albatross.

Thanks to miniaturised tracking devices, researchers were able to track the foraging movement of albatrosses at a distance of 3500 kilometers from the colony. They found that albatross have altered their search patterns following changes in wind conditions over the past two decades. Females used increasingly more poleward and windy areas for foraging. As a consequence their travel speed increased while the total distance covered during foraging flights did not change. "This means that they spend less time at sea while incubating the egg and thus the breeding success increases" explains Dr. Henri Weimerskirch of the French National Centre for Scientific Research (CNRS-CEBC). Researchers were surprised that both females and males have increased their body mass in one kilogram, which corresponds approximately to one tenth of their total body weight. This could be not only a result of shorter incubation periods on the nest, but also an adaptation to windier conditions.

"The wandering albatross Crozet population has decreased as a result of adult mortality on longline fishing in subtropical waters, especially females since they favour warmer subtropical waters in the north compared to the more southerly distribution of males" says Dr. Maite Louzao Arsuaga, who has been modelling albatross movement from 2009 to 2011 at the UFZ. "Due to the changing wind conditions, females are now foraging in more southward areas where such fishing is not that widespread". However, the positive effects of changing environmental conditions of the last decades will not last in the future. Climate scenarios predict that westerly winds will move even further south by 2080 and wandering albatrosses might have to fly further to find optimal conditions for flying.

The total population of the wandering albatross is currently estimated at around 8,000 breeding pairs. All populations have shown a decrease at some stage over the last 25 years. This endangered species is threatened primarily by incidental catch in fisheries, especially longline fishing at sea, whereas the introduction of alien species (such as rats or cats) are a key conservation threat for the species on breeding colonies. Additionally, the accumulation of anthropogenic debris such as plastic and fishing hooks on albatrosses have negative effects on their populations. Thus, it is important to continue with monitoring programs of population trends and distribution at sea, as well as to undertake effective conservation measures. The foraging habitat of wandering albatrosses is managed by more than one Regional Fisheries Management Organisations, which makes it difficult to implement conservation measures for the species. 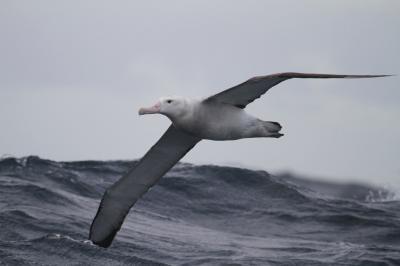 This is a wandering albatross in flight in rough sea.

The wandering albatross has fascinated people for centuries. With a wingspan of over three meters and a half, it is the largest seabird in the world, surpassing just the Andean condor (Vultur fulvus). This elegant sailor, which spends most of its life flying, breeds on remote subantarctic islands over the Southern Ocean. They travel thousand of kilometers searching for fish and cephalopods like squids, often following ships and feeding on offal. The plumage of wandering albatrosses is variable, whitening with age. The maximum known age is 55 years old. Since the rearing of chicks takes a whole year, they breed only every second year

Apart from the study published in the latest Science issue, the research team has identified the key marine areas for the conservation of wandering albatrosses in the southern Indian Ocean published in 2011 in the Journal of Applied Ecology. This study provided the first map to support the future development of a network of priority protected areas in the southern part of the Indian Ocean, which are based on habitat predictions. "Because the species has no natural enemies and is at the top of the food web, it is particularly well suited as an indicator of the health of marine ecosystems," says Dr. Thorsten Wiegand from the UFZ, who supervised the work of Dr. Maite Louzao. "This could help not only a single species, but the underlying biodiversity associated with pelagic key habitats to protect Southern Ocean. Moreover, we have developed methods of habitat modelling broadly applicable and can be used to assess changes in species distribution within the current global change scenario." 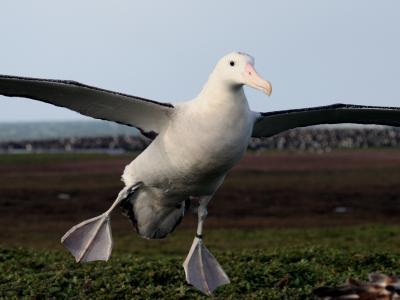 A wandering albatross lands to return to its nest after a foraging trip.