In 1766, Frenchwoman Jeanne Baret disguised herself as a man to work as assistant to renowned botanist Philibert Commerson on the first French circumnavigation of the globe. The expedition consisted of two ships under the command of Louis Antoine de Bougainville and was expected to take three years. A royal ordinance forbade women from being on French naval vessels; prejudice and custom prevented their participation in science. Nevertheless, Baret maintained her disguise all the time she was on board ship, and collected plants with Commerson in locations including Rio de Janeiro, the Strait of Magellan, Tahiti, Mauritius, and Madagascar. Baret was Commerson's lover, but also an accomplished botanist in her own right. When Commerson's ill health prevented him from fieldwork, Baret was responsible for all collections, including the most famous botanical specimen from the expedition: the vine that would be named in honor of its commander, Bougainvillea Comm. ex Juss.

The couple collected over six thousand specimens, now incorporated into the French National Herbarium at the Muséum National d'Histoire Naturelle. In the course of the expedition and the years after its successful completion, over seventy species would be named in honor of Commerson using the specific epithet commersonii. But Commerson died before he could publish many designations proposed in his notes, which reveal his intention to name the Malagasy genus Baretia. The species concerned are now placed in the genus Turraea of the family Meliaceae. Baret has therefore been left without anything in the natural world to commemorate her name. That is now to change as University of Utah and University of Cincinnati biologist Eric Tepe has named a new species in honor of Baret: Solanum baretiae. 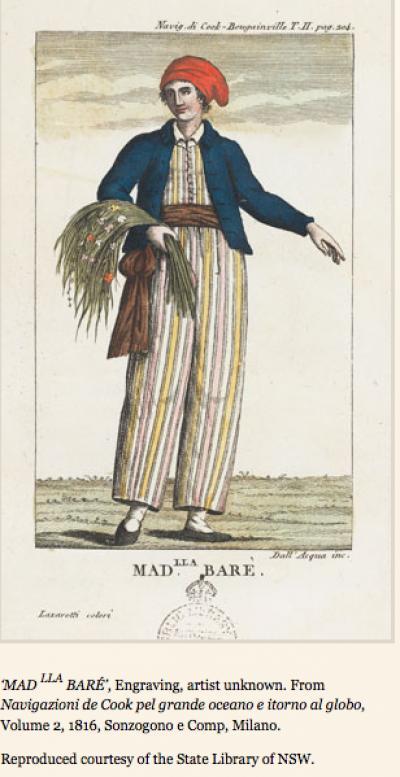 "Baret is unlikely to have sat for this intriguing image, which dates from 1816. It shows her dressed in striped fabric not popular with sailors until the 1790s, cut in a loose style to help conceal her shape. Wearing the red liberty cap of the French revolutionaries, she is portrayed as a symbol of the Republic. As for the sheaf of flowering plants in her hands, such posies were iconographic shorthand for the medicinal value of a botanical garden."

Tepe learned of Baret when he heard an NPR interview with Baret's biographer, Glynis Ridley, author of The Discovery of Jeanne Baret (Crown, 2010).

S. baretiae is a vine endemic to the Amotape-Huancabamba zone of southern Ecuador and northern Peru and grows in the understory of montane forests and disturbed roadside and pasture vegetation. Its flower petals have been seen in shades of violet, yellow, or white. The leaves of S. baretiae are highly variable in shape, as are the leaves of the species that Commerson originally intended to name after Baret. Then, as now, this seems a fitting tribute to a botanist uniting seemingly contradictory qualities: a woman dressed as a man, a female botanist in a male-dominated field, and a working class woman who travelled farther than most aristocrats of her time. 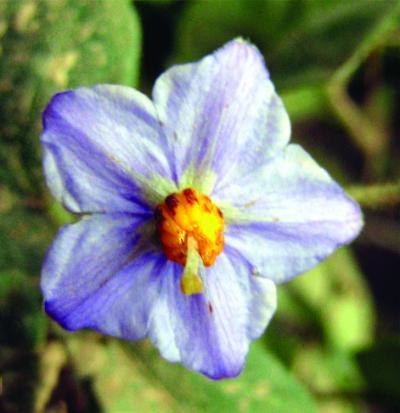 This is a flowering branch of Solanum. 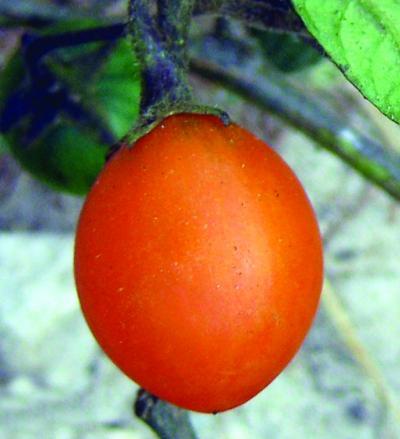 This is a Solanum branch with immature fruits. Mature fruits are orange.