The study, recently published in the journal Climatic Change, is the result of an interdisciplinary collaboration between two researchers: one is UC3M Professor Santiago Fernández Muñoz, who has worked in the area of geographic history under the direction of the Universidad Autónoma de Madrid Professor Josefina Gómez Mendoza; the other is Consejo Superior de Investigaciones Científicas (CSIC – Spanish National Research Council) ecologist Juli Pausas. Specifically, the authors constructed a complete database of historical fires in the province of Valencia in order to relate them to the evolution of the climate and societal and territorial transformations in the region. The research that was carried out provides the most complete series of data on the evolution of fires in the Mediterranean basin to date.

The conclusion they have reached is that a significant change in the number and, especially, size of forest fires took place during the decade of the seventies. This change can be directly related to the rural exodus and transformation of land use that took place during that decade. "The depopulation of rural areas resulted in the abandonment of agricultural spaces that had historically been interspersed among the forests. Because of this, in the space of a few years, spaces where there had previously been grain fields were invaded by highly flammable vegetation in a series of steps leading toward the Mediterranean forests", explains Professor Fernández Muñoz. 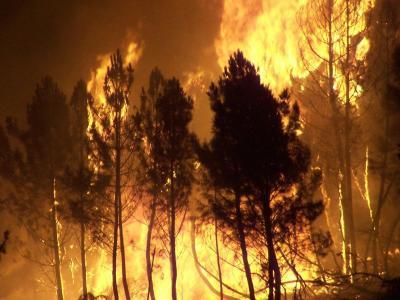 Research in which scientists from Universidad Carlos III de Madrid (UC3M) are participating analyzes the causes and characteristics of fires that have occurred in the Mediterranean basin in recent decades, and determines that rural exodus and changes in land use have increased the number and size of these fires.

The key: 0.6 inhabitants per square kilometer

At the same time, the extraction of firewood decreased drastically as a consequence of the incorporation of other sources of energy, and the country witnessed a very relevant transformation in its rural landscapes, which became "less populated and with fewer patchworks of land for agricultural use, with more continuous forest masses and more highly flammable vegetation", clarifies the expert. In spite of the fact that depopulation and the changes in land use were gradual, this research has detected a number of thresholds after which a very significant increase in the number of fires took place; these numbers fall around a population density of 0.6 inhabitants per square kilometer.

To carry out this study, the scientists first did basic research on the incidence of forest fires in the province of Valencia beginning in 1875. To do this, they reviewed the forest administration's archives and identified every news item regarding fires that had appeared in the local newspapers. Thanks to this work, they were able to elaborate a database with thousands of records of fires identified by date, location and the surface area that had burned. Finally, they related all of this information to socioeconomic variables (evolution of the population, land use, etc.) and climatic variables (precipitation, temperature), by applying complex statistical methods to find the connection among the different variables.

To sum up, what they have found is that the change in the occurrence of fires that are recorded in the historical research cannot be explained by the gradual change in climate, but rather that it corresponds to changes in the availability of fuel, the use of sources of energy and the continuity of the landscape. This research, which attempts to explain the evolution of fires, may be very useful for the management of forest areas prone to fires in the middle and long term, according to the authors.