Discovery of the smallest exoplanets: The Barnard's star connection

The discovery of the three smallest planets yet orbiting a distant star, which was announced today at the annual meeting of the American Astronomical Society, has an unusual connection to Barnard's star, one of the Sun's nearest neighbors.

The discovery was made by a scientific team led by astronomers at the California Institute of Technology (Caltech) that included three members from Vanderbilt. The team used data from NASA's Kepler mission combined with additional observations of a single star, called KOI-961, to determine that it possesses three planets that range in size from 0.57 to 0.78 times the radius of Earth. This makes them the smallest of the more than 700 exoplanets confirmed to orbit other stars.

In their investigation of KOI-961, which is about 130 light years away in the Cygnus constellation, the astronomers found that it is nearly identical to Barnard's star, which is only six light years away in the constellation Ophiuchus. This similarity allowed them to use information about Barnard's star, which was discovered in 1916 by Vanderbilt astronomer E.E. Barnard, to determine the mass, size and luminosity of the distant star. These values, in turn, were used to determine the size of the three new exoplanets.

"Barnard's star and KOI-961 are both M dwarfs, which are also known as red dwarfs. This is the smallest category of stars. They are popular targets for exoplanet hunters because their small size makes it easier to detect Earth-sized planets," said Keivan Stassun, the professor of astronomy who headed the Vanderbilt contingent. The other Vanderbilt scientists involved were Research Assistant Professors Joshua Pepper and Leslie Hebb.

From the 1960's through the 1980's, astronomers thought that Barnard's star also had a planetary system – specifically one or two planets larger than Jupiter. If their existence had been verified, it would have been a scientific first, but the evidence was ultimately discredited. Today, advances in telescope technology and image processing allow astronomers to identify stars with exoplanets with considerable confidence.

Although Barnard's star is too dim to be seen by the naked eye, its proximity to the Sun and the possibility that it possessed a planetary system made it a favorite destination for science fiction writers. It appears in dozens of science fiction novels, including Hitchhiker's Guide to the Galaxy, movies like the 1979 film The Alien Encounters, television series including Galactica Discovers Earth and a number of computer and video games. 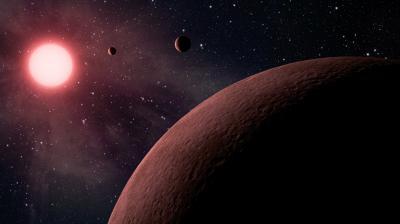 This artist's concept depicts an itsy bitsy planetary system -- so compact, in fact, that it's more like Jupiter and its moons than a star and its planets. Astronomers using data from NASA's Kepler mission and ground-based telescopes recently confirmed that the system, called KOI-961, hosts the three smallest exoplanets known so far to orbit a star other than our sun. An exoplanet is a planet that resides outside of our solar system.

The star, which is located about 130 light-years away in the Cygnus constellation, is what's called a red dwarf. It's one-sixth the size of the sun, or just 70 percent bigger than Jupiter. The star is also cooler than our sun, and gives off more red light than yellow.

The smallest of the three planets, called KOI-961.03, is actually located the farthest from the star, and is pictured in the foreground. This planet is about the same size as Mars, with a radius only 0.57 times that of Earth. The next planet to the upper right is KOI-961.01, which is 0.78 times the radius of Earth. The planet closest to the star is KOI-961.02, with a radius 0.73 times the Earth's.

All three planets whip around the star in less than two days, with the closest planet taking less than half a day. Their close proximity to the star also means they are scorching hot, with temperatures ranging from 350 to 836 degrees Fahrenheit (176 to 447 degrees Celsius). The star's habitable zone, or the region where liquid water could exist, is located far beyond the planets.

By contrast, KOI-961 is one of thousands of nameless stars that NASA's Kepler mission has identified as candidates that may possess planetary systems. The Kepler spacecraft contains a specially designed telescope that continuously monitors the brightness of 150,000 stars at a time. It flags stars whose brightness dips periodically because the dimming could be caused by a planet that passes in the front of the star as viewed from Earth. Astronomers call this the transit method of planet detection.

The Caltech team used the Kepler data on KOI-961 along with follow-up observations from the Palomar Observatory near San Diego and the W.W. Keck Observatory in Hawaii to confirm the existence of its planetary system and to determine the size of its planets.

The transit method provides astronomers with the ratio of the size of the planet to that of the star. As a result, they needed to determine the star's size to calculate the size of the planets. The Kepler telescope gives some crude information about a star's diameter, but the researchers knew that this data is particularly unreliable for M dwarfs, Stassun said. So the Vanderbilt contingent performed the additional telescope observations and analysis that were required to get an accurate estimate of the star's size.

To get better estimates of the star's properties, the astronomers obtained an accurate measure of the star's color from Vanderbilt's telescope in southern Arizona and a detailed spectrum of the star from Palomar and Keck. This provided a fingerprint of KOI-961. "When we compared its fingerprint with those of the best known M dwarfs we found that Barnard's star was the best match," said Stassun.

That was fortunate because Barnard's star is the one of the most studied and best characterized M dwarfs. Specifically, there is an accurate estimate of its size, which is one-fifth that of the Sun. This allowed the researchers to start with a mathematical model of Barnard's star and alter it to account for the subtle differences between the two stars. When they did, the model produced an even smaller estimate of KOI-961's size: about one-sixth that of the Sun.

Once the size of the star was established, the team used the Kepler data to calculate that the three exoplanets range from the size of Mars to slightly more than three-quarters the size of Earth. They also determined that these planets orbit the star with periods ranging from a half day to two days. Such short periods mean that all three orbit so close to their star that they must be too hot for liquid water to exist and life to evolve, the astronomers calculate.

New system comparable in size to Jupiter and its moons

The diminutive dimensions of this planetary system prompted John Johnson, the principal investigator of the research from NASA's Exoplanet Science Institute at Caltech, to comment, "The really amazing thing about this system is that the closest size comparison is to Jupiter and its moons." (KOI-961 is just 70 percent bigger than Jupiter and its exoplanets are comparable in size and have similar orbital periods to the Galilean moons that circle the Jovian planet.)

The fact that Barnard's star doesn't have a giant planet doesn't preclude the possibility that it has smaller planets. The discovery of another M dwarf that has small exoplanets increases the likelihood that Barnard's star may have some as well. If it does, however, the planets must orbit at a much greater distance than those at KOI-961. The Kepler mission requires that the image of a star must dip three times before it is tagged as a planet-bearing candidate. As a result, the longer a planet's orbital period, the more difficult it is to discover. For example, if a planet orbits a star once a year, it would take three years of continuous observations to detect in this fashion.