PROVIDENCE, R.I. [Brown University] — Psychotherapy has issues. Evidence shows that some psychosocial treatments work well for common mental health problems such as anxiety and depression and that consumers often prefer them to medication. Yet the use of psychotherapy is on a clear decline in the United States. In a set of research review papers in the November issue of the journal Clinical Psychology Review, now available online, psychologists put psychotherapy on the proverbial couch to examine why it's foundering.

Their diagnosis? Much as in many human patients, psychotherapy has a combination of problems. Some of them are of its own making while some come from outside the field itself. Fundamentally, argue Brandon Gaudiano and Ivan Miller, Brown University professors of psychiatry and human behavior whose review paper introduces the section they edited, the psychotherapy community hasn't defined, embraced, and articulated the ample evidence base clarifying their practice, while drug makers and prescribers have done so for medications. In a system of medicine and health insurance that rewards evidence-based practice and looks upon biology as a more rigorous science, psychotherapy has lost ground among physicians, insurers and policymakers.

"One might think that this deep and expanding evidence base would have promoted a similar increase in the use of psychosocial interventions that at least would have paralleled the one witnessed over the recent years by psychotropics, but it decidedly has not," Gaudiano and Miller wrote. "Thus a time that should have been a relative boon for psychotherapy based on scientific standards has become more of a bust."

"We haven't been holding ourselves to evidence-based practice," Gaudiano said of fellow psychologists. "Because of that we've had other groups who are more medication-focused define practice standards."

Gaudiano and Miller reference numerous studies and meta-analyses that have found certain psychotherapies — cognitive behavioral, mindfulness, interpersonal, family, or short-term psychodynamic therapies, for example — to be effective when used alone for patients with symptoms of depression or anxiety, and even beneficial when used in combination with medications for severe mental illness, such as schizophrenia. Some studies even show that psychosocial interventions provide longer-lasting therapeutic effects than medicines, they write. The problem for psychotherapy is not a lack of evidence, but a lack of acceptance of that evidence within the field.

Therapists, who can hail from a much wider variety of training backgrounds than physicians and others who prescribe medicine, can also practice a wide variety of therapies, whether they are supported by evidence or not (drugs, meanwhile, cannot reach the market without an evidence base of safety and efficacy, although they can still be prescribed "off label").

Research shows that many therapists put personal experience and intuition ahead of the evidence base. Gaudiano and Miller cite a 2000 survey of psychologists that found only 47 percent ever used evidence-based treatment manuals in practice and only 6 percent used them "often." A 2009 survey of social workers found that 76 percent had employed at least one "novel unsupported therapy" in the last year.

"There's nothing that compels therapists to use anything that's evidence-based," Gaudiano said. "We have a proliferation of non-supported psychotherapies out there." 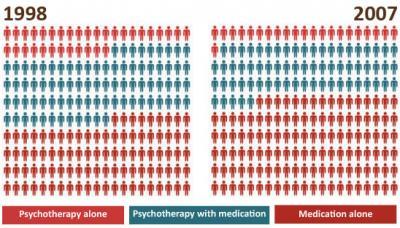 Amid wide discretion to use treatments that might have no evidentiary basis, the psychotherapy field is still struggling to set standards. The American Psychological Association only began developing treatment guidelines in 2010, while the American Psychiatric Association began that process in 1991.

"The field doesn't want to make discriminations by saying that what you've been doing for 40 years in your practice we now know is not the best way to do it, so we need you to change," Gaudiano said. "One of the biggest fears within psychology practice is that evidence-based treatment is going to make me change what I'm doing."

While many psychotherapists have either argued about or ignored the evidence base for their techniques, a variety of factors outside the field have marched along, putting a greater emphasis on explicitly medical and biological approaches to mental health, Gaudiano and Miller wrote.

These factors include well-intentioned but not entirely effective campaigns to destigmatize mental illness as a disease not unlike other physical ailments and a widening gap of insurance reimbursement for medicines vs. psychotherapy based on differences in the awareness and promotion of a strong evidence base.

Billions of dollars of direct to consumer advertising by pharmaceutical makers, for which psychotherapy has mustered little answer, have heavily influenced what patients ask from their doctors. As a result 15 times as many non-depressed patients are receiving antidepressants as depressed patients, according to a 2007 study in the journal PharmacoEconomics.

Meanwhile, federal funding for mental health research, which for decades has helped develop effective psychosocial treatments and build their evidence base, is under great pressure. At the same time it has increasingly focused on explicitly medical and biological research. And while there has been little private funding for advancing scientific studies of psychotherapy in lieu of federal funding, Gaudiano and Miller wrote, drug- or device-based therapies have had the concentrated backing of private capital.

Brett Deacon of the University of Wyoming analyzes the emphasis on biology in mental health treatment and research and its negative effect on psychotherapy. Steven Hayes of the University of Nevada and his co-authors propose a new model for how psychotherapies should be developed, based on the unconventional but successful origins of Acceptance and Commitment Therapy. Marvin Goldfried of Stony Brook University asks what people should actually expect from psychotherapy and calls on psychotherapy research to be more applicable to clinical practice. A group led by Scott Lilienfeld of Emory University examines why many clinical psychologists resist evidence-based practice and what to do about that. Jerome Wakefield of New York University uses an example from the newest edition of the Diagnostic and Statistical Manual of psychiatric diagnosis to argue against mischaracterizing normal sadness as physical disease.

The collection taken together suggests that psychotherapy has abundant problems, but also opportunities to advance as a field. Mobile technology, for example, provides new platforms for efficient delivery of therapy and the Affordable Care Act offers new avenues for psychotherapists to become part of collaborative health care teams.

Ultimately, Gaudiano and Miller wrote, psychotherapists must rally around and promote the findings of scientific studies of their practices — even if that means picking "winners" among therapies — to cement the resolve of the public, which may prefer but apparently does not insist on psychotherapy, and to convince insurers, physicians and policymakers that psychosocial approaches to common mental health issues are both viable and proven.