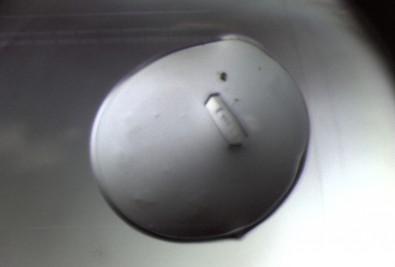 IMAGE: Crystal of the protein DRIK1 used in the study. It is involved in the mechanism of the plant's response to water and thermal stresses and to invasion by fungi

Researchers affiliated with the Genomics for Climate Change Research Center (GCCRC), hosted by the University of Campinas (UNICAMP) in the state of São Paulo, Brazil, have discovered a protein involved in corn's resistance to dry weather, high temperatures, and fungal invasion.

This finding paves the way for the development of more drought-resistant plants and products that reduce losses in production at a time when global climate change threatens crop yields around the world. An article on the study is published in BMC Plant Biology.

The GCCRC is an Engineering Research Center (ERC) established by FAPESP and the Brazilian Agricultural Research Corporation (EMBRAPA).

The researchers named the new protein drought-responsive inactive kinase 1 (DRIK1). They also found a synthetic molecule that binds to DRIK1 and can be used in the future to breed plants in which the activity of the protein is naturally reduced or to develop products that inhibit the protein.
"Under normal conditions, the protein controls the plant's developmental mechanisms and inhibits stress-response genes. In dry weather or when the plant is attacked by pathogens, levels of the protein are reduced, and the necessary response is triggered to control the effects of water stress, thermal stress or pathogen attack," said Paulo Arruda (http://www.fapesp.br/cpe/home), a professor in UNICAMP's Institute of Biology (IB) and GCCRC's project leader.

To identify the molecule that binds to the protein, the researchers used a platform developed by UNICAMP's Center for Medicinal Chemistry (CQMED) to discover molecular targets for drugs. Led by Arruda, CQMED is also one of the National Science and Technology Institutes (INCTs) co-funded in the state of São Paulo by São Paulo Research Foundation - FAPESP and the National Council for Scientific and Technological Development (CNPq).

"CQMED's platform can search libraries for small molecules that inhibit specific proteins," Arruda explained. "In human health, this is important for the development of a new drug that inhibits a kinase protein involved in a disease, for example. We used the platform to identify a molecule that binds to the plant's protein kinase, and now we can study the function of the water stress response mechanism in which it is involved."

The researchers screened a library of 378 compounds that might bind to DRIK1 and identified a synthetic molecule with this capacity (ENMD-2076). They plan to modify it so that it can regulate DRIK1, increasing or decreasing its expression in plants.

The authors of the article also include Bruno Aquino, who worked as a postdoctoral intern at IB-UNICAMP with a scholarship from FAPESP; Viviane Cristina Heinzen da Silva, currently a postdoctoral intern in UNICAMP's Center for Molecular Biology and Genetic Engineering (CBMEG); and Katlin Brauer Massirer, CQMED's coprincipal investigator with Arruda.

To find the protein DRIK1, scientists searched a public database for genes related to the response to water stress in plants. They grew corn from seeds in a plant growth chamber for 15 days, watering some of the plants normally throughout the period. The others were divided into three groups and were not irrigated for nine, 12 or 14 days.

Samples of leaves and roots were RNA-sequenced. The researchers found that the water-stressed plants expressed less DRIK1 but that levels of the protein returned to normal when the plants were watered.

Information mined from the same database showed that DRIK1 probably behaves similarly in response to warmer temperatures and attacks by at least two different fungi.

The researchers also analyzed the protein's three-dimensional structure and mapped potentially important regions for the stress response function. In the future, these regions could serve as targets for compounds that modulate the protein's action mechanism.

Researchers are now working on the production of plants genetically engineered for altered expression of DRIK1 with the aim of obtaining varieties that are more drought-resistant.

"If we succeed in producing a variety that withstands water stress slightly more than others during a drought, it will be like having genetic insurance," Arruda said. "There will always be losses, but tons of food will be saved if these losses can be reduced."