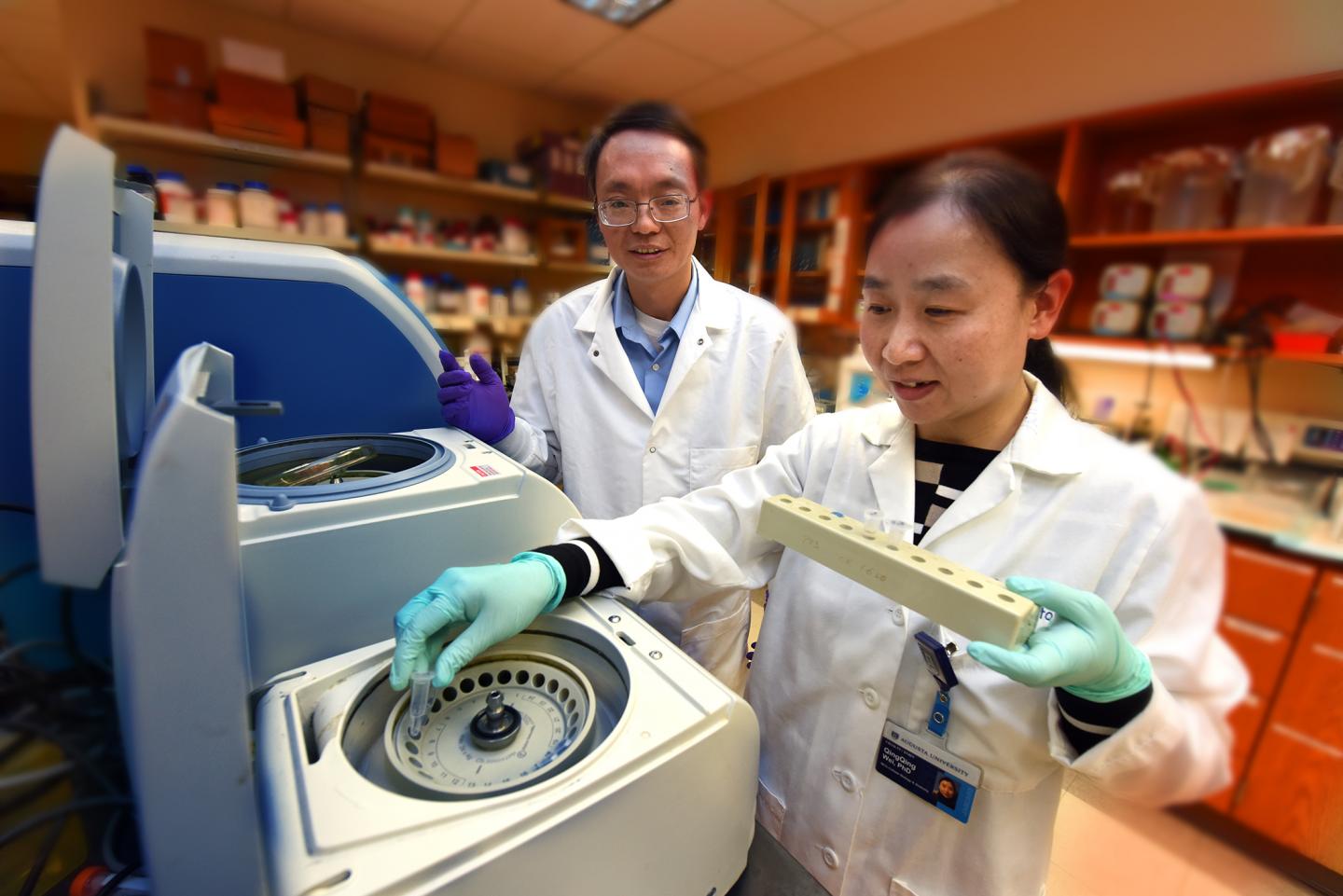 IMAGE: Drs. Zheng Dong and Qingqing Wei in the Cellular Biology Anatomy lab at the Medical College of Georgia at Augusta University

AUGUSTA, Ga. (Dec. 6, 2018) - For the first time, scientists have described the body's natural mechanism for temporarily protecting the powerhouses of kidney cells when injury or disease means they aren't getting enough blood or oxygen.

Powerhouses, called mitochondria, which provide fuel for our cells, start to fragment, likely as one of the first steps in the kidney cell damage and death that often result from an acute kidney injury, says Dr. Zheng Dong, cellular biologist in the Department of Cellular Biology and Anatomy at the Medical College of Georgia at Augusta University.

Dong and his colleagues appear to have delineated the natural mitochondrial protection pathway in kidney cells and say it's a logical therapeutic target for treating acute kidney injury.

"We know there is a natural protective mechanism. Maybe we need to upregulate it," says Dong, also a senior research career scientist and director of research development at the Charlie Norwood Veterans Affairs Medical Center in Augusta. Dong is senior author of the study published in the Journal of Clinical Investigation.

In fact, drugs that target at least one key part of the pathway already have been studied in patients experiencing anemia - a deficiency in the red blood cells that carry oxygen - because of chronic kidney disease.

The scientists started by examining a large number of microRNAs, small RNAs known to regulate gene expression. They found one, microRNA-668, consistently elevated in both patients with an acute kidney injury as well as animal models of the condition, which is common in patients in intensive care, particularly older patients.

Mitochondrial fission and fusion are polar opposites but their balance is key to a healthy cell powerhouse. They are governed by two distinct classes of proteins, which emerging evidence suggests are regulated by microRNAs.

Proteins like mitochondrial Protein 18 KDa, or MTP18, for example, have already been implicated in powerhouse fission, at least in periods of stress. The MCG scientists and their collaborators have now confirmed it's a direct target of microRNA-668.

But the pathway has at least one earlier point of action: hypoxia-inducible factor-1, or HIF-1, a transcription factor that increases when oxygen levels decrease to help cells adjust by controlling expression of genes that can protect them.

They found that ischemic acute kidney injury induces HIF-1, which upregulates microRNA-668, which suppresses MTP18 and the result is kidney cell protection.

One key discovery was an HIF-1 binding site on the gene that promotes microRNA-668, and the related finding that too little HIF-1 reduced the expression of microRNA-668.

"The microRNA-668 gene is a new targeted gene for HIF-1, which may help explain some of HIF-1's protective function," Dong says.

"We don't know what MTP18 does normally, but now we know what it does when stressed," Dong says. "It induces fragmentation of the mitochondria."

They've shown that increased levels of microRNA-668 can prevent most of that damage so the cell can keep functioning ideally until blood and oxygen are restored. "This is like a temporary mechanism for cell survival," Dong says.

One way physicians might one day improve the odds for mitochondrial and kidney survival, may be a class of drugs called PHD inhibitors, which have already been studied in chronic kidney disease. PHD - prolyl hydroxylase - is a protein that induces the degradation of protective HIF-1 and Dong suspects PHD inhibitors could benefit patients with acute kidney injury as well. A microRNA-668 mimic, similar to that used in the studies, might one day be another option.

Right now there aren't any targeted therapies for acute kidney injury, says Dong, rather supportive therapies like hydration, possible short-term dialysis and addressing the injury cause.

With an acute kidney injury, kidney function deteriorates in a few hours or days. It can result from a literal blow to the kidney, in a fall or car accident, or from dehydration in an overzealous student athlete. In the face of general good health, most patients recover fully and quickly, Dong says.

However, acute kidney injury mostly occurs in people who already have another medical problem like diabetes. In fact, most are in the hospital when it happens, with problems like bleeding or shock, failure of other organs like the heart, even an overdose of over-the-counter nonsteroidal anti-inflammatories for problems like a cold or flu, according to the National Kidney Foundation.

Dong's lab was the first to show that as a class of molecules, microRNAs could play an important role in reducing acute kidney injury. They reported in 2010 that deletion of a key enzyme for microRNA production from kidney tubules made mice resistant to ischemia-induced acute kidney injury, suggesting an important destructive role for at least some microRNAs.

Subsequent work by Dong and colleagues led to identification of specific microRNAs with significant changes in expression in the face of ischemic acute kidney injury. Those studies found some microRNAs definitely promote fission but others seem to help protect kidney cells.

Just what microRNA-668 does has been largely unknown other than another recent report implicating it in protecting human breast cancer cells from radiation therapy.