It was a case of a besotted male and beer. Love-sick and lonely, the male girded his loins and took immediate action to relieve his unhappiness – but with a surprising outcome, as a U of T Mississauga professor discovered.

The male in question, an Australian jewel beetle (Julodimorpha bakewelli), became so enamored with a brown "stubby" beer bottle that he tried to mate with it – so vigorously that he died trying to copulate in the hot sun rather than leave willingly, says Professor Darryl Gwynne of biology, an international expert in behavioural ecology, specifically the evolution of reproductive behaviour.

Today, Gwynne and his Australian colleague David Rentz were awarded an Ig Nobel Prize at Harvard University for their 1983 paper "Beetles on the Bottle: Male Buprestids Mistake Stubbies for Females." The Ig Nobel Prizes, a parody of the Nobel Prizes, are awarded annually by the scientific humour magazine Annals of Improbable Research to "first make people laugh and then make them think." The prizes are intended to celebrate the unusual, honour the imaginative and spur people's interest in science, medicine and technology.

"I'm honoured, I think," Gwynne says, with a smile on his face. "The awards make people think, and they're a bit of a laugh. Really, we've been sitting here by the phone for the past 20 plus years waiting for the call. Why did it take them so long?"

Gwynne and Rentz were conducting field work in Western Australia 23 years ago when they noticed something unusual along the side of the road. "We were walking along a dirt road with the usual scattering of beer cans and bottles when we saw about six bottles with beetles on top or crawling up the side. It was clear the beetles were trying to mate with the bottles." 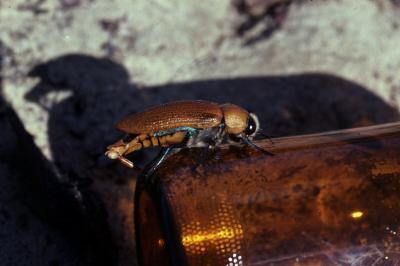 A male Australian jewel beetle attempts to mate with a "stubby" beer bottle.

The bottles – stubbies as they are known in Australia – resemble a "super female" jewel beetle, Gwynne says: big and orangey brown in colour, with a slightly dimpled surface near the bottom (designed to prevent the bottle from slipping out of one's grasp) that reflects light in much the same way as female wing covers. The bottles proved irresistible to males. Ignoring the females, the males mounted or tried to climb up the bottles, refusing to leave. They fried to death in the sun, were eaten by hungry ants or had to be physically removed by the researchers.

Gwynne and Rentz determined that the males were attracted only to stubbies – not to beer cans or wine bottles of a slightly different shade of brown. And it wasn't the bottles' contents that captured their attention: "Not only do western Australians never dispose of a beer bottle with beer still in it, but many of the bottles had sand and detritus accumulated over many months," the research paper notes.

Beer and sex humour aside, the research has serious messages, Gwynne says. First, when humans interfere – perhaps unwittingly – in an evolutionary process, there can be unintended consequences; in this case, female beetles are ignored by males which can have a huge impact on the natural world. "Improperly disposed of beer bottles not only present a physical and 'visual' hazard in the environment, but also could potentially cause great interference with the mating system of a beetle species," the paper says. To that end, Gwynne forwarded research results to a leading western Australian brewer.

And secondly, Gwynne points out that the research supports the theory of sexual selection: that males, in their eagerness to mate, are the ones that make mating mistakes.

Gwynne conducted his research as a post-doctoral fellow at the University of Western Australia in Nedlands. He joined U of T Mississauga in 1987. The research was published in the journal of the Entomological Society of Australia and the U.K.-based journal, Antenna.