In addition to being used as a recreational drug, marijuana has been used for centuries to treat a variety of conditions, from chronic pain to epilepsy. However, its medical value is greatly limited by debilitating side effects. A study published by Cell Press November 21st in the journal Cell has revealed the molecular pathways responsible for marijuana-induced learning and memory problems. The findings suggest that preventing these side effects could be as easy as taking an over-the-counter painkiller.

"Our studies have solved the longtime mystery of how marijuana causes neuronal and memory impairments," says senior study author Chu Chen of Louisiana State University Health Sciences Center. "The results suggest that the use of medical marijuana could be broadened if patients concurrently take a nonsteroidal anti-inflammatory drug such as ibuprofen."

The main active ingredient in marijuana is Δ 9-tetrahydrocannabinol (Δ9-THC), and drugs based on this compound have been approved by the Food and Drug Administration (FDA) to treat nausea and vomiting in chemotherapy patients. But these drugs have not been approved for a wider range of conditions, in part because of Δ9-THC-induced side effects. Moreover, there are no effective FDA-approved treatments for these side effects because, until now, little was known about the molecular pathways underlying these impairments. 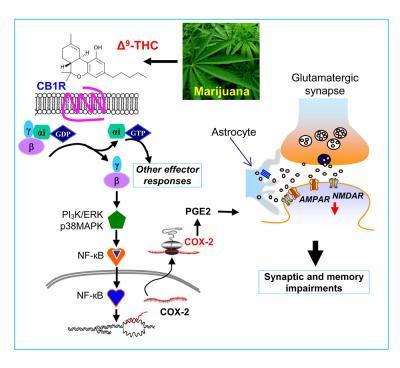 In the new study, Chen and his team discovered that Δ9-THC treatment caused an increase in levels of an enzyme called cyclooxygenase-2 (COX-2) in the mouse hippocampus, a brain region involved in learning and memory. Drugs or genetic techniques that reduced COX-2 levels in mice prevented memory problems and neuronal abnormalities caused by repeated Δ9-THC exposure. Because COX-2 is inhibited by over-the-counter painkillers such as ibuprofen, the findings suggest an easy strategy to prevent the side effects of marijuana.

The researchers also discovered that Δ9-THC treatment reduced neuronal damage in a mouse model of Alzheimer's disease, and this beneficial effect persisted when the animals were simultaneously treated with a COX-2 inhibitor. "There are no effective medications currently available for preventing and treating Alzheimer's disease or halting disease progression," Chen says. "Our results suggest that the unwanted side effects of cannabis could be eliminated or reduced, while retaining its beneficial effects, by administering a COX-2 inhibitor along with Δ9-THC for the treatment of intractable medical conditions such as Alzheimer's disease."