Prehistoric climate change due to cosmic crash in Canada

For the first time, a dramatic global climate shift has been linked to the impact in Quebec of an asteroid or comet, Dartmouth researchers and their colleagues report in a new study. The cataclysmic event wiped out many of the planet's large mammals and may have prompted humans to start gathering and growing some of their food rather than solely hunting big game.

The findings appear next week in the online Early Edition of the Proceedings of the National Academy of Sciences. A preprint of the article is available to journalists starting Wednesday, Aug. 28, at http://www..org/account.php.

The impact occurred about 12,900 years ago, at the beginning of the Younger Dryas period, and marks an abrupt global change to a colder, dryer climate with far-reaching effects on both animals and humans. In North America, the big animals all vanished, including mastodons, camels, giant ground sloths and saber-toothed cats. Their human hunters, known to archaeologists as the Clovis people, set aside their heavy-duty spears and turned to a hunter-gatherer subsistence diet of roots, berries and smaller game.

An artist's rendition of mastodons, camels and a ground sloth before the environmental changes of the Younger Dryas led to their extinction.

"The Younger Dryas cooling impacted human history in a profound manner," says Dartmouth Professor Mukul Sharma, a co-author of the study. "Environmental stresses may also have caused Natufians in the Near East to settle down for the first time and pursue agriculture."

It is not disputed that these powerful environmental changes occurred, but there has long been controversy over their cause. The classic view of the Younger Dryas cooling interlude has been that an ice dam in the North American ice sheet ruptured, releasing a massive quantity of freshwater into the Atlantic Ocean. The sudden influx is thought to have shut down the ocean currents that move tropical water northward, resulting in the cold, dry climate of the Younger Dryas.

But Sharma and his co-authors have discovered conclusive evidence linking an extraterrestrial impact with this environmental transformation. The report focuses on spherules, or droplets of solidified molten rock expelled by the impact of a comet or meteor. The spherules in question were recovered from Younger Dryas boundary layers at sites in Pennsylvania and New Jersey, the layers having been deposited at the beginning of the period. The geochemistry and mineralogy profiles of the spherules are identical to rock found in southern Quebec, where Sharma and his colleagues argue the impact took place. 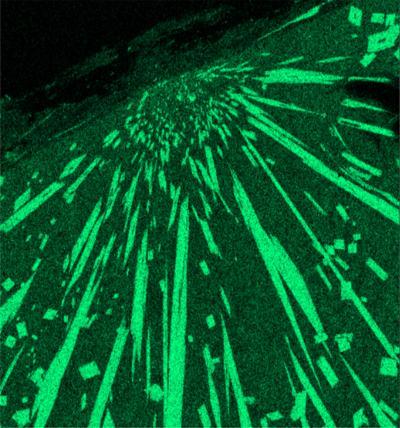 The high temperatures of the meteorite impact 12,900 years ago produced mm-sized spherules of melted glass with the mullite and corundum crystal structure shown here.

"We have for the first time narrowed down the region where a Younger Dryas impact did take place," says Sharma, "even though we have not yet found its crater." There is a known impact crater in Quebec — the 4-kilometer wide Corossal crater -- but based on the team's mineralogical and geochemical studies, it is not the impact source for the material found in Pennsylvania and New Jersey.

People have written about many impacts in different parts of the world based on the presence of spherules. "It may well have taken multiple concurrent impacts to bring about the extensive environmental changes of the Younger Dryas," says Sharma. "However, to date no impact craters have been found and our research will help track one of them down." 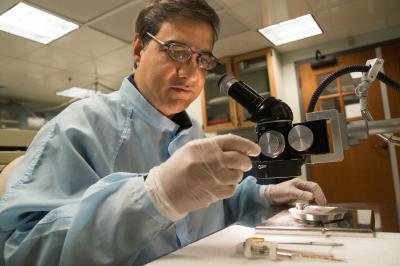 Using a binocular microscope, Dartmouth geochemist Mukul Sharma examines impact-derived spherules that he and his colleagues regard as evidence of a climate-altering meteor or comet impact 12,900 years ago.