Researchers from Munich and Naples have shown that minimal modification of a synthetic peptide with anti-HIV activity results in a new compound with more than two orders of magnitude higher binding affinity to the chemokine receptor CXCR4 and greatly improved anti-HIV activity. This could be a step toward the design of new, more effective drugs against AIDS, inflammatory diseases, and some forms of cancer.

Different strains of HIV-1 use either the chemokine receptor CCR5 or CXCR4 for entry into immune cells. While drugs that block usage of CCR5 by the virus are already available for anti-HIV therapy, no drugs have been approved that prevent the virus from using the CXCR4 receptor. Because the new cyclic peptide may be used to block CXCR4, it is a promising new drug candidate to block HIV-1 infections.

An international, interdisciplinary team including researchers in pharmaceutical radiochemistry and chemistry at the Technische Universität München (TUM), a group of molecular modelers at the University of Naples, and virologists at the Helmholtz Zentrum München reported the results in Angewandte Chemie International Edition. This work was initiated by the radiochemists and organic chemists at TUM, who realized that their approach to modifying peptides as high-affinity CXCR4 ligands for imaging of cancers also has the potential to open a whole new area of drug research. 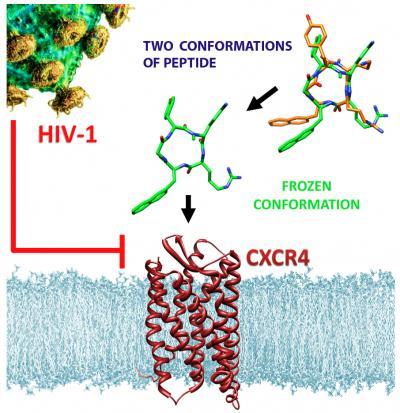 The modified anti-HIV molecule (center) binds with more than two orders of magnitude higher affinity to the CXCR4 receptor on the surface of immune cells and shows greatly enhanced anti-HIV activity. This could be a step toward the design of new, more effective drugs against AIDS, inflammatory diseases, and some forms of cancer.

The researchers used a smart trick to augment both the binding affinity and the anti-HIV activity of an already known lead structure: They shifted one of the important side chains from the carbon to a neighboring nitrogen, thus fixing the skeleton of the molecule to present its binding groups in an improved orientation.

The cyclic structure of the peptide, with one unnatural D-amino acid (the mirror image of the natural amino acid tyrosine) and one so-called "peptoid" structure, makes the compound stable against enzymatic degradation and thus suitable for in vivo applications. Since CXCR4 receptors also play an important role in cancer metastasis, derivatives of this compound are also being tested as new agents for imaging and treatment of cancer. The team's "frozen peptoid" displays a 400 to 1500 times higher binding affinity to the CXCR4 ligand compared to other CXCR4-targeting compounds currently under clinical development, including one already involved in the treatment of non-Hodgkin lymphoma and multiple myeloma.

"We are very happy that the specific modifications designed by our team have led to a drug compound that may be useful for treatment of multiple life-threatening diseases," says Prof. Horst Kessler, a senior fellow of the TUM Institute for Advanced Study and "emeritus of excellence" in the TUM Department of Chemistry. "For anti-HIV therapy," adds Prof. Ruth Brack-Werner, a virologist from the Helmholtz Zentrum, "the new compound may provide a drug against particularly aggressive HIV-1 strains that come up in HIV-infected individuals after many years of infection." "We look forward with great enthusiasm to the next preclinical and clinical tests," says Prof. Hans-Jürgen Wester, TUM Chair of Pharmaceutical Radiochemistry. "These compounds offer exciting possibilities."