Post-wildfire erosion can be major sculptor of forested western mountains

Erosion after severe wildfires can be the dominant force shaping forested mountainous landscapes of the U.S. Intermountain West, suggests a new research paper by two University of Arizona geoscientists.

The study is the first to assess the impact of wildfires on such landscapes by combining several different ways to measure short-term and long-term erosion rates, said study co-author Jon Pelletier, a UA professor of geosciences.

After the 2011 Las Conchas fire in New Mexico, soil and rock eroded from burned watersheds more than 1,000 times faster than from unburned watersheds nearby, the team found. Most of the erosion happened in the first year after the fire. 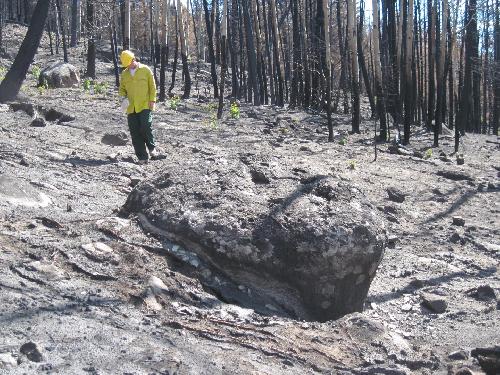 Jon Pelletier, a University of Arizona professor of geosciences, walks through the forest on Cerro del Medio, a mountain in New Mexico's Valles Grande, after the 2011 Las Conchas fire. Credit: Caitlin Orem

Caitlin Orem had been studying erosion in seven mountain watersheds near New Mexico's Valles Grande but wasn't focused on wildfire. When the Las Conchas fire burned two of her study areas, she seized the opportunity to compare the rates that watersheds were denuded of soil and rocks before and after a severe wildfire.

"We knew that wildfire increased the rate of erosion, but we didn't know how important it was over long time scales," said first author Orem. The research was part of her doctoral studies in the UA Department of Geosciences.

"It was a really huge opportunity to learn a lot about wildfires. There are very few times you can see that big of a change and can actually document it."

Orem and Pelletier calculated total erosion rates for their study area for time scales up to 1 million years ago. The scientists found more than 90 percent of the erosion happened in the geologically brief time intervals right after forest fires. Those post-fire intervals constituted just 3 percent of the total time.

Pelletier, co-director of the CZO, said, "I think we can generalize this to similar landscapes in the Intermountain West - landscapes that are forested, have very little bare ground, and have few areas with slopes steeper than about 25 degrees."

The paper, "The predominance of post-wildfire erosion in the long-term denudation of the Valles Caldera, New Mexico," by Orem, now a geologist for BP in Anchorage, Alaska, and Pelletier, has been accepted for publication in the Journal of Geophysical Research: Earth Surface, a publication of the American Geophysical Union.

In 2010, Orem and Pelletier began studying the role of erosion in sculpting the mountain watersheds that drain into the Valles Grande, including those on Redondo Peak and on Cerro del Medio.

Pelletier said, "The goal is to determine topographic change--the volume that has been removed or deposited."

Working with the National Center for Airborne Laser Mapping, the UA geoscientists used a technology called LIDAR (Light Detection and Ranging) to create a digital map, or digital elevation model, showing the area's surface relief at that time.

Although Redondo Peak, one of the team's study areas, now has steep-sided ridges and deep valleys, previous investigators showed that Redondo Peak formed 1.24 million years ago as a rounded volcanic dome.

To calculate long-term erosion rates for Redondo Peak, the team needed to figure out how much rock and soil had been stripped off the mountain and how long it took for that material to be removed.

Using the digital elevation model, known as a DEM, Orem calculated the volume of material that eroded from the original dome over time. Dividing that volume by the mountain's age gives the average long-term erosion rate.

Such a long-term rate incorporates many different events in the mountain's history. The researchers already knew events such as flood or wildfire could increase erosion rates.

The team corroborated their DEM-based calculation by measuring how much beryllium-10 had accumulated in the soil. Pelletier said beryllium-10 analyses provide an "erosion clock" over time scales of thousands of years.

The researchers found the long-term erosion rate for Redondo Peak was 100 times greater than the background rate, indicating erosion rates on the mountain had been greater in the past. Redondo Peak had no wildfires during the time the team took stream samples.

A nearby mountain with similar terrain, Cerro del Medio, had a severe forest fire in 2011, giving the team the opportunity to measure post-wildfire erosion directly. Post-fire, the increase in erosion was obvious--boulders the size of office desks had rolled down the slopes and into the meadow below.

The team had already made a pre-fire digital elevation model, or DEM, of two Cerro del Medio watersheds. The team made new DEMs of the changing landscape right after the fire and again 10, 13 and 22 months later.

By comparing the pre-fire DEM to the series of post-fire DEMs, the scientists found the burned watershed lost 1,000 to 10,000 times more rocks and soil in the first year after the fire than did a similar but unburned watershed on Redondo Peak.

The researchers calculated that over a million years, if such post-wildfire erosion occurred for a year just once every 30 to 300 years, enough material would be removed to sculpt Redondo Peak's original dome into the steeply incised mountain it is today.

"Over millennia there's a gradual transfer of soil from high spots to low spots," Pelletier said. "Most of the post-fire erosion is in the streambed. In the time period between fires, soil is still moving, but it's moving to fill in the hole created by the flooding just after the fire."

The team's estimate of past wildfire frequency matches what other researchers found by studying the natural records of wildfires contained in the region's tree rings and lake sediments.

Orem said, "Other researchers have found that in the Western U.S., the area being burned and the severity of the burns are increasing. With that increase, we expect to see more wildfire-caused erosion."