Decades of drought in central Africa reached their worst point in the 1980s, causing Lake Chad, a shallow lake used to water crops in neighboring countries, to almost dry out completely.

New University of Washington research, to be published in Geophysical Research Letters, shows that the drought were caused at least in part by Northern Hemisphere air pollution.

Aerosols emanating from coal-burning factories in the United States and Europe during the 1960s, '70s and '80s cooled the entire Northern Hemisphere, shifting tropical rain bands south. Rains no longer reached the Sahel region, a band that spans the African continent just below the Sahara desert.

When clean-air legislation passed in the U.S. and Europe, the rain band shifted back, and the drought lessened. Related research by the UW researchers and their collaborators shows that global warming is now causing the land-covered Northern Hemisphere to warm faster than the Southern Hemisphere, further reversing the pre-1980s trend.

Previous research has suggested a connection between coal-burning and the Sahel drought, but this was the first study that used decades of historical observations to find that this drought was part of a global shift in tropical rainfall, and then used multiple climate models to determine why.

"One of our research strategies is to zoom out," said lead author Yen-Ting Hwang, a UW doctoral student in atmospheric sciences. "Instead of studying rainfall at a particular place, we try to look for the larger-scale patterns." 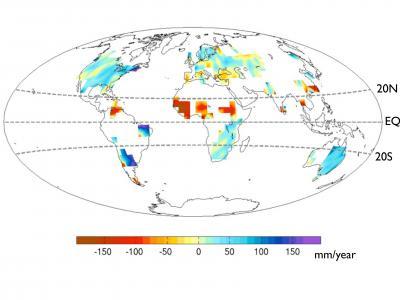 This graphic shows global precipitation change between 1931-1950 and 1961-1980. The African Sahel, center, is much drier, while east Africa and east Brazil are wetter.

To determine that the Sahel drought was part of a broader shift, the authors looked at precipitation from all rain gauges that had continuous readings between 1930 and 1990. Other places on the northern edge of the tropical rain band, including northern India and South America, also experienced dryer climates in the 1970s and '80s. Meanwhile, places on the southern edge of the rain band, such as northeast Brazil and the African Great Lakes, were wetter than normal.

To understand the reason, authors looked at all 26 climate models used by the Intergovernmental Panel on Climate Change. Researchers discovered that almost all the models also showed some southward shift, and that cooling from sulfate aerosols in the Northern Hemisphere was the primary cause.

"We think people should know that these particles not only pollute air locally, but they also have these remote climate effects," Hwang said.

People living in the Northern Hemisphere did not notice the cooling, the authors said, because it balanced the heating associated with the greenhouse effect from increased carbon dioxide, so temperatures were steady.

"To some extent, science messed this one up the first time around," said co-author Dargan Frierson, a UW associate professor of atmospheric sciences. "People thought that a large part of that drought was due to bad farming practices and desertification. But over the last 20 years or so we've realized that that was quite wrong, and that large-scale ocean and atmosphere patterns are significantly more powerful in terms of shaping where the rains fall."

The models did not show as strong a shift as the observations, Frierson said, suggesting that ocean circulation also played a role in the drought.

The good news is that the U.S. Clean Air Act and its European counterpart had an unintended positive effect beyond the improved air quality and related health benefits. Although shorter-term droughts continue to affect the Sahel, the long-term drought began to recover in the 1980s.

"We were able to do something that was good for us, and it also benefited people elsewhere," Frierson said.