Antalya, Turkey, December 14, 2013 – The groundbreaking Intergovernmental Platform on Biodiversity and Ecosystem Services (IPBES) today agreed to develop a set of assessments on pollination and food production, land degradation and invasive species aimed at providing policymakers with the tools to tackle pressing environmental challenges.

Around 400 delegates from over 100 governments, scientific organizations, civil society and the private sector, attended the second meeting of the Platform in Antalya, Turkey. IPBES Member Governments present at the meeting adopted a very ambitious initial work programme for the Platform for the next five years, and demonstrated strong commitment to its implementation by already pledging more than half (US$ 25.4 million) of the total US$ 43.5 million required, in what will be remembered as the "Antalya consensus".

IPBES was established to assist governments and the public to better understand the trends and challenges facing the natural world and humanity in the 21st century, and thus promote human wellbeing and sustainable development through the sustainable use of biodiversity.

The first assessment, to be available as early as December 2015, will look at pollination and food production. Studies show that some three-fourth of the world's crops depend on pollination by bees and other pollinators for optimum production. However, more information is needed in order to fully understand how pollination underpins food production and assess the effectiveness of current policies.

A second assessment will focus on the status of land degradation and restoration worldwide, as well as the effect this has on biodiversity, ecosystem services and human wellbeing. According to the United Nations Convention to Combat Desertification, land degradation over the next 25 years may reduce global food production by up to 12 percent, resulting in an increase of as much as 30 percent in global food prices.

Over the next five years, the sub-regional, regional and global scale assessment and capacity building activities undertaken by IPBES will strengthen the science-policy interface at all levels.

In doing so, IPBES will contribute to the objectives of the strategic plans of the biodiversity-related multilateral environmental agreements.

The Platform will also support work on the integration of indigenous and local knowledge in scientific processes, and on valuation and accounting of biodiversity and ecosystem services.

Overall, this work will require contributions from thousands of scientists from around the globe in the fields of natural and social sciences, and indigenous and local knowledge. They will work together to synthesize cutting-edge scientific information and produce tools in order to support the creation of the best possible policies.

Malaysian Zakri Abdul Hamid, the first Chair of IPBES, noted that, in addition to its recognition of indigenous knowledge, a distinguishing characteristic of the IPBES is its mandate to build the capacity of developing countries to conduct biodiversity science.

"There's an old saying: We measure what we treasure," said Dr. Zakri. "Though we profess to treasure biodiversity, most nations have yet to devote or acquire the resources needed to properly measure and assess it along with the value of ecosystem services. Correcting that is a priority assignment from the world community to IPBES."

"The UN's 2015 Sustainable Development Goals, now under consideration, are expected to include biodiversity-related targets for achievement by 2030, together with indicators of progress," added Dr. Zakri, also recently appointed to the UN Secretary-General's new 26-member Scientific Advisory Board. To be effective, obviously, it is vital that nations have the tools and personnel to establish authoritative scientific baselines and collect ongoing data to know whether headway is being made or not."

This is the logo of the new UN Intergovernmental Platform on Biodiversity and Ecosystem Services.

The partnership agreement and the full participation of the UN bodies in IPBES will improve the dialogue between policy-makers and the scientific community on the critical role of biodiversity and ecosystem services. By representing the environment, the sciences, education, food and agriculture, development, and capacity-building, they will bring a range of expertise to support decision and policy-making.

The meeting announced that a French national, Anne Larigauderie, formerly Executive Director of DIVERSITAS and Head of Science in Society at the International Council for Science (ICSU) has been appointed as the Head of the IPBES Secretariat in Bonn, Germany. 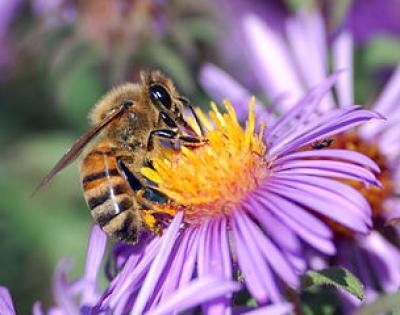 Insect pollination is necessary for up to 75 percent of global crops that are used as human food, and for 84 percent of European cultivated crop species (source: http://bit.ly/1b5Pp8F).