When the lamp is shattered,The light in the dust lies dead.When the cloud is scattered,The rainbow's glory is shed.

These words, which open Shelley's poem "When the Lamp is Shattered," employ visions of nature to symbolize life in decay and rebirth. It's as if he had somehow foreseen the creation of this new Gemini Legacy image, and penned a caption for it. What Gemini has captured is nothing short of poetry in motion: the colorful and dramatic tale of a life-and-death struggle between two galaxies interacting. All the action appears in a single frame, with the stunning polar-ring galaxy NGC 660 as the focus of attention.

Polar-ring galaxies are peculiar objects. Astronomers have found only a handful of them, so not much is known about their origins. Most have an early-type spiral system, called a lenticular galaxy, as the central showpiece. But NGC 660, which lies about 40 million light-years distant toward the direction of Pisces the Fishes, is the only polar-ring galaxy known with what is called a late-type lenticular galaxy as its host. All, however, display a ring of stars, dust, and gas that extends tens of thousands of light-years across space along an orbit nearly perpendicular to the main disk.

Models of how polar-ring galaxies for offer two general formation scenarios: 1) a piercing merger between two galaxies aligned roughly at right angles, or 2) when the host galaxy tidally strips material from a passing gas-rich spiral and strews it into a ring.

What you see in this new Gemini Legacy image, then, is not a single dynamic body but either the "bloody" aftermath of one galaxy piercing the heart of another or the remains of a furious tidal struggle between two galaxies that shattered one galaxy's "lamp," scattered its dust and gas, and formed a colorful, 40,000-light-year-long ring of visual glory.

Brian Svoboda of the University of Arizona, who recently studied the chemical and temperature environment of NGC 660, believes that unique morphology arises from a previous interaction with a gas-rich galaxy. The geometry of NGC 660 –– an enormous edge-on polar ring (some 40,000 light-years across) –– contains more gas (and associated star formation) than its host, which strongly suggests a violent formation. "One of the main characteristics of NGC 660 is that the ring is not truly polar, but is inclined ~45 degrees from the plane of the disk," Svoboda points out. "The simulations for the piercing mergers cannot reproduce these low inclination polar rings; however, the tidal accretion scenario can."

NGC 660's polar ring resolves into hundreds of objects, a considerable part of which are blue and red supergiant stars. The youngest detected stars in the ring formed only about 7 million years ago, indicating a long, ongoing process. 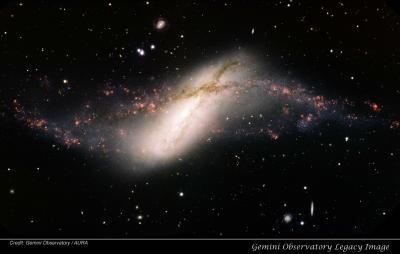 This image of the ring galaxy NGC 660, captured with the Gemini Multi-Object Spectrograph on the Fredrick C. Gillett Gemini North telescope on Mauna Kea in Hawaii, was obtained in August 2012. The optical image, made using g, r, I, and hydrogen alpha filters, were assigned the colors of blue, green, orange and red respectively. The field of view is 9.3x5.6 arcminutes and is oriented 8 degrees clockwise from north at right and east up. The total exposure (integration) time was 1,620 seconds cumulative for all filters.

"Gemini's incredible definition of the active star forming regions strewn through the polar ring in NGC 660, juxtaposed against the exquisite crossing dust lanes, is simply beautiful. It really is the most incredible picture I've seen of the galaxy," Svoboda exclaims. "None of the other images I've seen, including those from the Hubble Space Telescope, show the star forming regions with such clarity."

If NGC represents a merging of two galaxies, astronomer would expect to find a collapsed core and a burst of star formation, which they do see. But the monkey wrench is the uniquely high gas content of both NGC 660's disk component andits polar ring.

"A tidal accretion event will place gas in the polar ring without strongly interacting with the original gas rich host, Svoboda explains. "Tidal interaction is consistent with an influx of gas into the nuclear region creating the starburst that we observe now." Further evidence, he says, is NGC 660's lack of a double nucleus (i.e. two super-massive black holes), which one would expect from a merger.

Astronomers have not detected any "tails" extending from NGC 660, a key signature of many tidal interactions. Usually, when galaxy passes close to another, tidal forces eject stars, gas, and dust into a graceful tail of extragalactic debris and stretched them far into space. But both polar-ring models have produced systems without tidal tails while creating active star formation in the polar ring.

While it can't be proven with a great deal of confidence, in the case of NGC 660, Svoboda says, "I think that there is good evidence to suggest that the origin of the polar ring lies in the tidal accretion event scenario." Particularly he notes that the ring may be about 1 billion years old, so the stripped galaxy could have moved out of the field by the time of our observations now.

Unseen to the eye, but bright at radio wavelengths, is a compact source (less than 32 light-years in extent) at the host's core. Believed to be a super cluster of stars in a dense cloud of dust and gas, this powerful radio emitter contains perhaps a few thousand hot, blue youthful stars.

Galaxies usually have a majority of old red stars at their cores, but one of the violent scenarios that created NGC 660 has triggered a furious burst of star formation at the galaxy's core. Either way, the gravitational interaction between the two galaxies created shock waves that plowed into giant clouds of gas, causing them to collapse into behemoth blue stars, many likely containing more than 100 times the mass of our Sun. These monstrous, short-lived, stars exploded shortly thereafter as supernovae, which generated more shock waves, creating a domino effect that has ever since perpetuated the creation of youthful stars at NGC 660's core. NGC 660, then, is not only a polar-ring galaxy but also a starburst galaxy. These systems are among the most dense and intense star-forming environments known.

The ring in a polar-ring galaxy rotates at a speed comparable to that of its host galaxy. By determining how fast a polar ring rotates at different distances from the center of the system, astronomers can search for evidence of elusive and mysterious dark matter in NGC 660's halo. Radio observations have shown that while the ring's velocity close to NGC 660's core is normal, the velocity in the ring's outer parts remains consistent; theoretically the rotational velocity should have dropped off significantly due to the region's gas-poor environment. This finding points to the existence of huge amounts of dark matter in NGC 660.

Astronomers believe dark matter influences the dynamics of all galaxies. Yet understanding dark matter remains one of the astronomy's greatest challenges. Further observations of the enigmatic environment of NGC 660 may shed more light on this … well … dark matter.