A team of Chinese and American scientists has learned how to maintain high fusion performance under steady conditions by exploiting a characteristic of the plasma itself: the plasma self-generates much of the electrical current needed for plasma containment in a tokamak fusion reactor. This self-generated, or "bootstrap," current has significant implications for the cost-effectiveness of fusion power.

Magnetic fusion energy research uses magnetic fields to confine the fusion fuel in the form of a plasma (ionized gas) while it is heated to the very high temperatures (more than 100 million degrees) necessary for the ions to fuse and release excess energy that can then be turned into electricity. The most developed approach uses the tokamak magnetic confinement geometry (a torus shaped vessel), and it is the basis for ITER, a 500-MW heat generating fusion plant currently being built in France by a consortium of seven parties—China, the European Union, India, Japan, Russia, South Korea and the United States.

In the tokamak configuration, the confining magnetic field is generated by external coils and by an electric current flowing within the plasma. The cost of driving these currents has a strong impact on the economic attractiveness of a fusion reactor based on the tokamak approach. One step to minimizing this cost is to make the external coils of superconducting wire. The second step is to take full advantage of a surprising feature of the tokamak configuration: under certain conditions the electric current in the plasma can be generated by the plasma itself ("bootstrap" current).

The recent joint experiment, carried out on the DIII-D National Fusion Facility at General Atomics in San Diego, involved scientists from the DIII-D tokamak and from the Experimental Advanced Superconducting Tokamak (EAST), a fusion energy research facility at the Institute of Plasma Physics, Chinese Academy of Sciences (ASIPP) in Hefei, China. Building on earlier DIII-D work, the experiment found that it is feasible for a tokamak to operate reliably at high fusion performance with most (more than 85 percent) of its plasma current consisting of bootstrap current. These conditions were maintained for several seconds, beyond the characteristic time scale of the plasma current evolution, and limited only by DIII-D pulse length constraints. 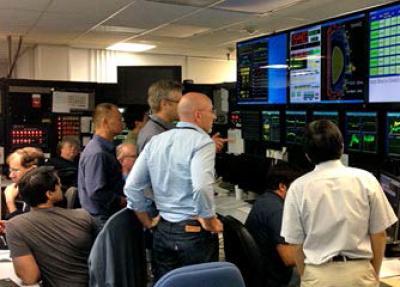 Scientists from the EAST tokamak experiment work with their US colleagues in control room of the DIII-D tokamak where they carried out experiments to test concepts that will enable groundbreaking experiments in EAST in 2014.

"It is often said that a plasma with a high fraction of self-generated (bootstrap) current would be difficult to control. However, these experiments show that a high bootstrap fraction plasma is very stable against transients: the plasma seems to 'like' a state where a large fraction of the current is self-generated," said Dr. Andrea Garofalo, General Atomics scientist and co-leader of the joint experiment.

These results build the foundation for follow-up experiments to be conducted on EAST, where the superconducting coils enable extension to very long pulse, and verification of the compatibility of this regime with reactor relevant boundary conditions.

ASIPP Director Prof. Jiangang Li remarked, "After the successful joint experiments in DIII-D, I am fully convinced that the DIII-D results can be reproduced on EAST in the near future, which will help us achieve the demonstration of high fusion performance in long pulse tokamak discharges."