What people take from nature – water, food, timber, inspiration, relaxation – are so abundant, it seems self-evident. Until you try to quantitatively understand how and to what extent they contribute to humans.

In today's world, where competition for and degradation of natural resources increases globally, it becomes ever more crucial to quantify the value of ecosystem services – the precise term that defines nature's benefits, and even more important to link how different types of ecosystem services affect various components of human well-being.

Scientists at Michigan State University's Center for Systems Integration and Sustainability (CSIS), in two parallel papers published in this week's journal PLOS ONE, develop an entirely new integrated approach to quantify human dependence on ecosystem services and human well-being so as to promote the understanding of the linkages between them – an important step toward improved understanding, monitoring and management of coupled human and natural systems.

Understanding how human and natural systems interact is enormously important," said Jianguo "Jack" Liu, Rachel Carson Chair in Sustainability and CSIS director. "Climate change, energy and food insecurity, biodiversity loss and water shortages all have raised the stakes. If we can't quantify the complex relationships between ecosystem services and human well-being, both ecosystems and humans will suffer and will not be sustainable." 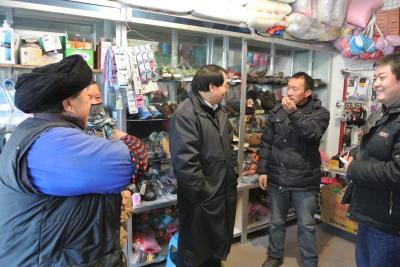 Jianguo "Jack" Liu of Michigan State University's Center for Systems Integration and Sustainability, talks to farmers and storekeepers who make their livelihood from Wolong Nature Reserve in China.

Wu Yang, a CSIS doctoral student, went beyond the United Nations Millennium Ecosystem Assessment by creating two novel index systems for quantifying human dependence on ecosystem services and human well-being from ecosystem services. The trick on one hand, he said, was to come up with ways to represent the benefits people gained from these resources, as well as any socioeconomic benefits that are not gained specifically from nature. On the other hand, it was to design a reliable instrument to quantify different components of human well-being that could be linked and integrated with the index of dependence on ecosystem services in models.

"If you don't understand the linkages, you're not going to be able to sustain the flow of those benefits to human society," Yang said. "Thus, we've developed and empirically validated our new methods, and made these methods as general as possible so they can be applied to many other coupled human and natural systems across the globe."

Wolong Nature Reserve in the southwestern Sichuan Province of China, the center's "excellent laboratory" to study coupled human and natural systems, was particularly suited for testing the new methods because it was close to the epicenter of the catastrophic 2008 Wenchuan earthquake, which dramatically changed local households' dependence on ecosystem services and human well-being in a short time. Because CSIS scientists had studied the area for almost two decades, they had rich long-term data and local knowledge to evaluate the relationships between people and ecosystem services.

The methodologies are presented in two interrelated papers.

The second paper is "Going beyond the Millennium Ecosystem Assessment: An index system of human well-being" by Yang, Dietz, Daniel Kramer, associate professor in fisheries and wildlife and James Madison College; Xiaodong Chen, former CSIS doctoral student now on faculty at the University of North Carolina-Chapel Hill; and Jack Liu. 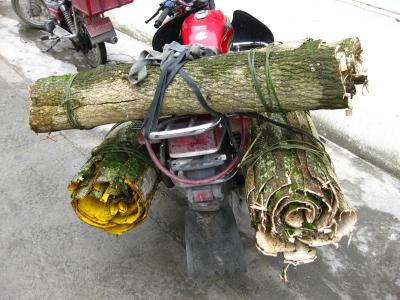 A motorbike transports bark used for medicine that has been harvested from Wolong Nature Reserve in China.