Once regarded as the stuff of science fiction, antimatter—the mirror image of the ordinary matter in our observable universe—is now the focus of laboratory studies around the world.

While physicists routinely produce antimatter with radioisotopes and particle colliders, cooling these antiparticles and containing them for any length of time is another story. Once antimatter comes into contact with ordinary matter it "annihilates"—or disappears in a flash of gamma radiation.

Clifford Surko, a professor of physics at UC San Diego who is constructing what he hopes will be the world's largest antimatter container, said physicists have recently developed new methods to make special states of antimatter in which they can create large clouds of antiparticles, compress them and make specially tailored beams for a variety of uses.

He described the progress made in this area, including his own efforts, at the annual meeting in Washington, DC, of the American Association for the Advancement of Science. His talk, "Taming Dirac's Particle," led off the session entitled "Through the Looking Glass: Recent Adventures in Antimatter," at 1:30 pm on February 18.

Surko said that since "positrons"—the anti-electrons predicted by English physicist Paul Dirac some 80 years ago—disappear in a burst of gamma rays whenever they come in contact with ordinary matter, accumulating and storing these antimatter particles is no small feat. But over the past few years, he added, researchers have developed new techniques to store billions of positrons for hours or more and cool them to low temperatures in order to slow their movements so they can be studied.

Surko said physicists are now able to slow positrons from radioactive sources to low energy and accumulate and store them for days in specially designed "bottles" that have magnetic and electric fields as walls rather than matter. They have also developed methods to cool them to temperatures as low as that of liquid helium and to compress them to high densities.

"One can then carefully push them out of the bottle in a thin stream, a beam, much like squeezing a tube of toothpaste," said Surko, adding that there are a variety of uses for such positrons. 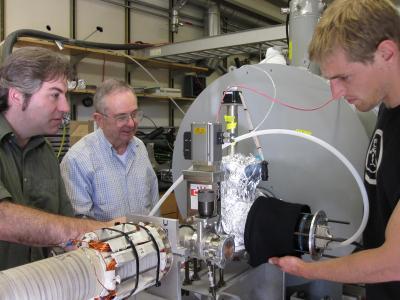 UCSD physicists James Danielson, Clifford Surko and Craig Schallhorn (left to right) inspect the apparatus they are using to develop the world's largest trap for low-energy positrons, planned to hold a trillion or more antiparticles.

A familiar positron technique that does not use this new technology is the PET scan, also known as Positron Emission Tomography, which is now used routinely to study human metabolic processes and help design new drugs.

In the new methods being developed by physicists, beams of positrons will be used in other ways. "These beams provide new ways to study how antiparticles interact or react with ordinary matter," said Surko. "They are very useful, for example, in understanding the properties of material surfaces."

Surko and his collaborators at UC San Diego are studying how positrons bind to ordinary matter, such as atoms and molecules. "While these complexes only last a billionth of a second or so," he said, "the 'stickiness' of the positron is an important facet of the chemistry of matter and antimatter."

Surko and his colleagues are building the world's largest trap for low-energy positrons in his laboratory at UC San Diego, capable of storing more than a trillion antimatter particles at one time.

"We are now working to accumulate trillions of positrons or more in a novel 'multi-cell' trap—an array of magnetic bottles akin to a hotel with many rooms, with each room containing tens of billions of antiparticles," he said.

"These developments are enabling many new studies of nature. Examples include the formation and study of antihydrogen, the antimatter counterpart of hydrogen; the investigation of electron-positron plasmas, similar to those believed to be present at the magnetic poles of neutron stars, using a device now being developed at Columbia University; and the creation of much larger bursts of positrons which could eventually enable the creation of an annihilation gamma ray laser."

"An exciting long-term goal of the work is the creation of portable traps for antimatter," added Surko. "This would increase greatly the ability to use and exploit antiparticles in our matter world in situations where radioisotope- or accelerator-based positron sources are inconvenient to arrange."