Physical activity may leave the brain more open to change

Learning, memory, and brain repair depend on the ability of our neurons to change with experience. Now, researchers reporting in the Cell Press journal Current Biology on December 7 have evidence from a small study in people that exercise may enhance this essential plasticity of the adult brain.

The findings focused on the visual cortex come as hopeful news for people with conditions including amblyopia (sometimes called lazy eye), traumatic brain injury, and more, the researchers say.

"We provide the first demonstration that moderate levels of physical activity enhance neuroplasticity in the visual cortex of adult humans," says Claudia Lunghi of the University of Pisa in Italy. 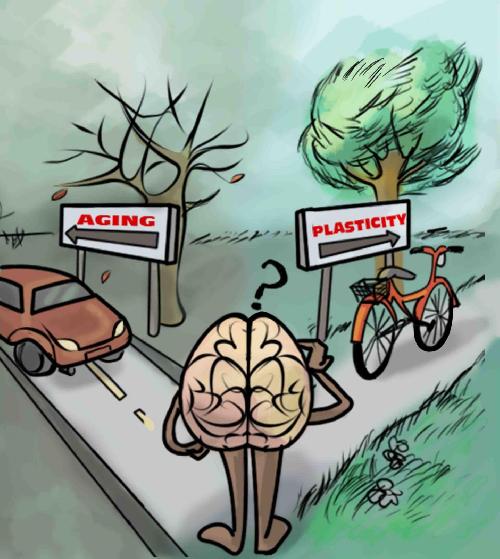 This is an artistic representation of the take home messages in Lunghi and Sale: "A cycling lane for brain rewiring," which is that physical activity (such as cycling) is associated with increased brain plasticity. Credit: Dafne Lunghi Art

"By showing that moderate levels of physical activity can boost the plastic potential of the adult visual cortex, our results pave the way to the development of non-invasive therapeutic strategies exploiting the intrinsic brain plasticity in adult subjects," she adds.

The plastic potential of the cerebral cortex is greatest early in life, when the developing brain is molded by experience. Brain plasticity is generally thought to decline with age. This decline in the brain's flexibility over time is especially pronounced in the sensory brain, which displays far less plasticity in adults than in younger people.

Lunghi and colleague Alessandro Sale of the National Research Council's Neuroscience Institute were inspired to explore the role of physical activity in brain plasticity by experiments that Sale conducted previously in laboratory animals. Those studies showed that animals performing physical activity--for example rats running on a wheel--showed elevated levels of plasticity in the visual cortex and improved recovery from amblyopia in comparison to more sedentary animals.

To find out whether the same might hold true for people, the researchers measured the residual plastic potential of the adult visual cortex in humans using a simple test of binocular rivalry. Most of the time, our eyes work together. But when people have one eye patched for a short period of time, the closed eye becomes stronger as the visual brain attempts to compensate for the lack of visual input. The strength of the resulting imbalance between the eyes is a measure of the brain's visual plasticity and can be tested by presenting each eye with incompatible images.

In the new study, Lunghi and Sale put 20 adults through this test twice; in one deprivation test, participants with one eye patched watched a movie while relaxing in a chair. In the other test, participants with one eye patched exercised on a stationary bike for ten-minute intervals during the movie. The results were clear: brain plasticity was enhanced by the exercise.

"We found that if, during the two hours of eye patching, the subject intermittently cycles, the perceptual effect of eye patching on binocular rivalry is stronger compared to a condition in which, during the two hours of patching, the subject watches a movie while sitting on a chair. That is, after physical activity, the eye that was patched is strongly potentiated, indicating increased levels of brain plasticity."

While further study is needed, the researchers think that this effect may result from a decrease with exercise in an inhibitory neurotransmitter called GABA. As concentrations of this inhibitory nerve messenger decline, the brain becomes more responsive.

Regardless of the mechanism, the findings suggest that exercise plays an important role in brain health and recovery. They come as especially good news for people with amblyopia, which is generally considered to be untreatable in adults.

"Our study suggests that physical activity, which is also beneficial for the general health of the patient, could be used to increase the efficiency of the treatment in adult patients," Lunghi says. "So, if you have a lazy eye, don't be lazy yourself!"

Lunghi and Sale say they now plan to investigate the effects of moderate levels of physical exercise on visual function in amblyopic adult patients and to look deeper into the underlying neural mechanisms.