Photoactive bacteria bait may help in fight against MRSA infections 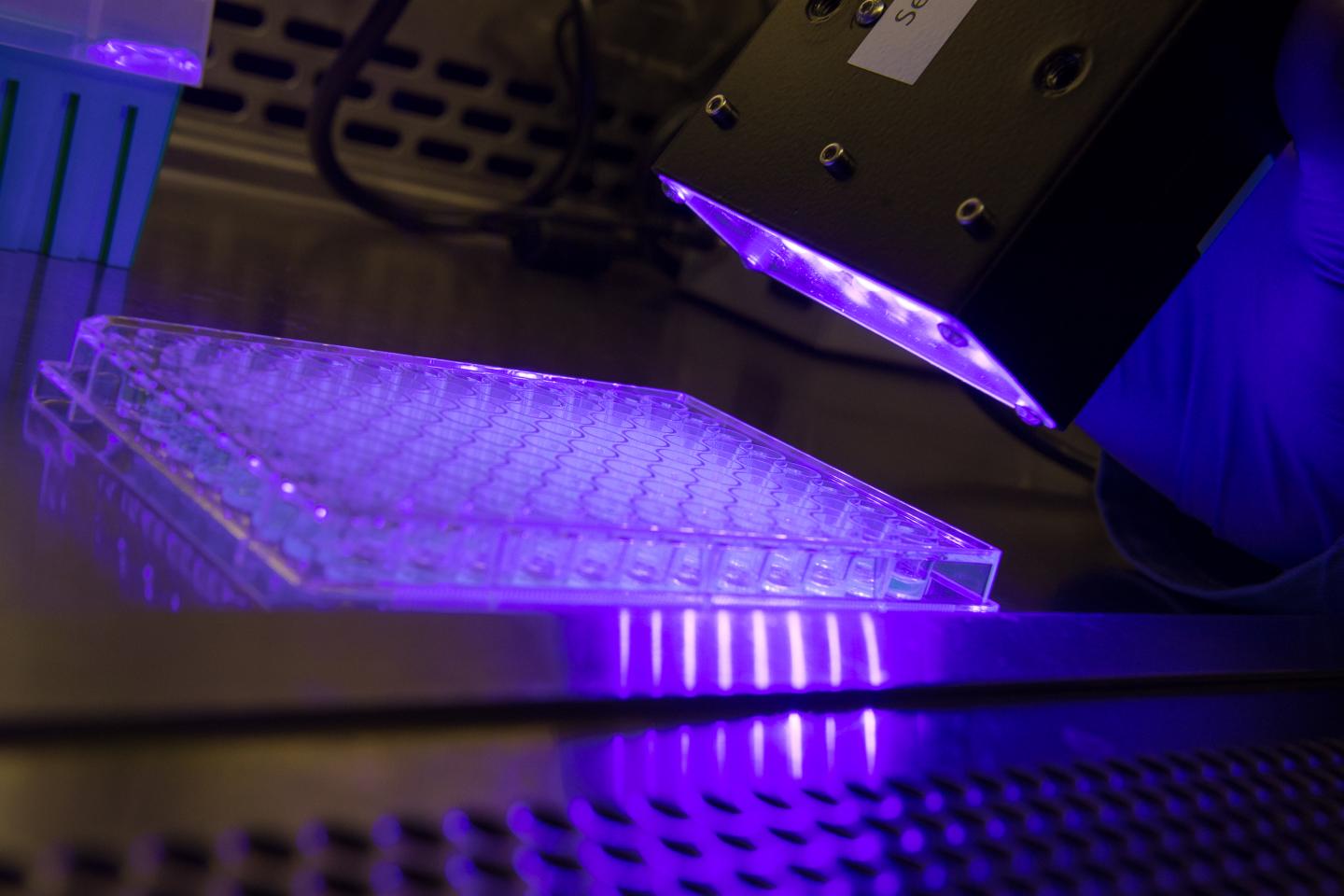 IMAGE: Purdue University researchers are testing whether a simple light-emitting diode array that is safe to use on human skin can be used to inactivate methicillin-resistant Staphylococcus aureus, or MRSA, one...

WEST LAFAYETTE, Ind. - Purdue University researchers are testing whether a light-active version of heme, the molecule responsible for transporting oxygen in blood circulation, may help people infected with MRSA.

Purdue University researchers are testing whether a simple light-emitting diode array that is safe to use on human skin can be used to inactivate methicillin-resistant Staphylococcus aureus, or MRSA, one of six 'high priority' pathogens that the World Health Organization has identified as an imminent threat to public health. Here the light shines above a 96-well plate in a bio-safety hood. (Purdue Research Foundation photo/John Underwood) Download image

The research was published in the American Chemical Society journal ACS Infectious Diseases in September. A link to the article is here.

The World Health Organization identifies MRSA as one of about a dozen antibiotic "superbugs" that pose an enormous threat to human health.

WHO has listed methicillin-resistant Staphylococcus aureus, or MRSA, as one of six 'high priority' pathogens with an imminent threat to public health. The Centers for Disease Control and Prevention reports 80,461 people in the United States suffer severe MRSA infections a year and 11,285 die.

Anyone can get MRSA on their body from contact with an infected wound, or by sharing personal items such as towels or razors that are contaminated. However, patients in hospitals are especially vulnerable to MRSA infections.

"MRSA infections can cause severe problems for patients recovering from surgery," said Alexander Wei, a professor of chemistry in the College of Science who is leading the research team. "The challenge that we face is that MRSA responds poorly to multiple antibiotics. Antimicrobial photodynamic therapy offers a promising alternative for combating MRSA in infected wounds."

Photodynamic therapy, or PDT, involves a compound known as a photosensitizer, which can be activated by visible light to kill diseased cells or bacteria. PDT is a clinically proven method for fighting cancer but has not yet been developed for treating MRSA infections.

The discovery aligns with Purdue's Giant Leaps celebration, recognizing the university's global advancements made in health, longevity and quality of life as part of Purdue's 150th anniversary. This is one of the four themes of the yearlong celebration's Ideas Festival, designed to showcase Purdue as an intellectual center solving real-world issues.

The photosensitizer developed at Purdue is called Ga-PpIX, and is an analog of heme. Ana Morales-de-Echegaray, the lead graduate research assistant on the project at the time, discovered that Ga-PpIX could be gobbled up by MRSA strains within seconds, leading to their rapid inactivation using a simple light-emitting diode (LED) array that is safe to use on human skin.

"Our discovery is part of a convergence on campus to develop drugs and get them to people in need as quickly as possible," Wei said.

Wei and his collaborator Mohamed Seleem, a professor in Purdue's College of Veterinary Medicine, are working closely with the Purdue Institute of Inflammation, Immunology and Infectious Disease and the Purdue Institute for Drug Discovery to determine if this kind of treatment could work for animals and with other types of skin infection.

The technology is patented through Purdue Office of Technology Commercialization, and the researchers are looking for partners to continue developing practical applications for the discovery.