Max Ortiz Catalan, researcher at Chalmers University of Technology, has developed a new method for the treatment of phantom limb pain (PLP) after an amputation. The method is based on a unique combination of several technologies, and has been initially tested on a patient who has suffered from severe phantom limb pain for 48 years. A case study shows a drastic reduction of pain.

People who lose an arm or a leg often experience phantom sensations, as if the missing limb were still there. Seventy per cent of amputees experience pain in the amputated limb despite that it no longer exists. Phantom limb pain can be a serious chronic and deteriorating condition that reduces the quality of the person´s life considerably. The exact cause of phantom limb pain and other phantom sensations is yet unknown.

Phantom limb pain is currently treated with several different methods. Examples include mirror therapy (see fact box), different types of medication, acupuncture and hypnosis. In many cases, however, nothing helps. This was the case for the patient that Chalmers researcher Max Ortiz Catalan selected for a case study of the new treatment method he has envisaged as a potential solution.

The patient lost his arm 48 years ago, and had since that time suffered from phantom pain varying from moderate to unbearable. He was never entirely free of pain.

The patient´s pain was drastically reduced after a period of treatment with the new method (see image). He now has periods where he is entirely free of pain, and he is no longer awakened by intense periods of pain at night like he was previously. 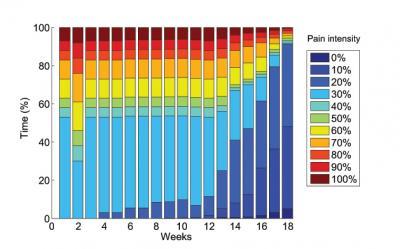 This image shows the patient´s pain levels over the 18 weeks since treatment started. The pain was drastically reduced after a period of treatment with the new method. The patient now has periods where he is entirely free of pain.

The new method uses muscle signals from the patient´s arm stump to drive a system known as augmented reality. The electrical signals in the muscles are sensed by electrodes on the skin. The signals are then translated into arm movements by complex algorithms. The patient can see himself on a screen with a superimposed virtual arm, which is controlled using his own neural command in real time.

"There are several features of this system which combined might be the cause of pain relief" says Max Ortiz Catalan. "The motor areas in the brain needed for movement of the amputated arm are reactivated, and the patient obtains visual feedback that tricks the brain into believing there is an arm executing such motor commands. He experiences himself as a whole, with the amputated arm back in place."

Modern therapies that use conventional mirrors or virtual reality are based on visual feedback via the opposite arm or leg (see fact box). For this reason, people who have lost both arms or both legs cannot be helped using these methods.

"Our method differs from previous treatment because the control signals are retrieved from the arm stump, and thus the affected arm is in charge" says Max Ortiz Catalan. "The promotion of motor execution and the vivid sensation of completion provided by augmented reality may be the reason for the patient improvement, while mirror therapy and medicaments did not help previously."

A clinical study will now be conducted of the new treatment, which has been developed in a collaboration between Chalmers University of Technology, Sahlgrenska University Hospital, the University of Gothenburg and Integrum. Three Swedish hospitals and other European clinics will cooperate during the study which will target patients with conditions resembling the one in the case study – that is, people who suffer from phantom pain and who have not responded to other currently available treatments.

The research group has also developed a system that can be used at home. Patients will be able to apply this therapy on their own, once it has been approved. An extension of the treatment is that it can be used by other patient groups that need to rehabilitate their mobility, such as stroke victims or some patients with spinal cord injuries. 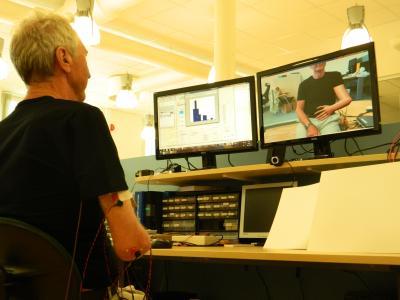 In the augmented reality environment, the patient can see himself with a superimposed virtual arm, which is controlled by muscle signals from his arm stump.