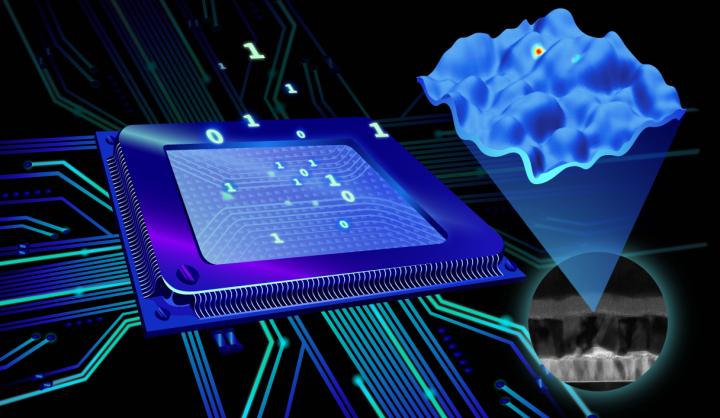 Resistive switching memory devices offer several advantages over the currently used computer memory technology. Researchers from the MIPT Atomic Layer Deposition Lab have joined forces with colleagues from Korea to study the impact of electrode surface morphology on the properties of a resistive switching memory cell. It turned out that thicker electrodes have greater surface roughness and are associated with markedly better memory cell characteristics. The research findings were published in ACS Applied Materials & Interfaces.

Some materials, such as transition metal oxides, can switch from a dielectric to a conductive state and back under applied voltage. This effect underlies resistive random-access memory, a highly promising technology for nonvolatile storage. RRAM devices based on transition metal oxides are characterized by low energy consumption, great endurance, ease of extension, and rapid operation, prompting many companies to invest in the technology.

A resistive memory cell is a layered structure with an insulating layer positioned between two electrodes, to which the switching voltage is applied. The properties of the cell depend on the material between the electrodes, as well as on the composition and shape of the electrodes themselves. It is common for one electrode to be made of titanium nitride and the other of platinum. However, platinum is incompatible with modern semiconductor technology due to the absence of dry etching capability. This is not the case with ruthenium, which has a further advantage of being suitable for atomic layer deposition (ALD), enabling the manufacture of 3D vertical memory structures.

Study co-author and MIPT PhD student Aleksandra Koroleva from the University's School of Electronics, Photonics and Molecular Physics commented: "To investigate how electrode thickness affects memory cell parameters, we grew ruthenium electrodes with a varying number of atomic layer deposition cycles. We then examined the surface of the electrodes using atomic force microscopy." The team found that as the number of ALD layers grew, the grain size on the electrode surface increased from 5 to 70 nanometers.

The researchers tested the performance of their ruthenium films with different thicknesses as the bottom electrode in tantalum oxide-based RRAM, showing that thicker -- and therefore rougher -- electrodes actually improved the key performance characteristics of the memory device: its stability and endurance. Increasing ruthenium film thickness resulted in a lower memory cell resistance in both states and a higher resistance ratio between the low- and high-resistance states. Enhancing electrode roughness also decreased the forming and switching voltages, and increased the device's endurance to an impressive 50 million switching cycles.

To explain their findings, the team proposed a simplified model that reflects the electric field distribution on large grains on the ruthenium electrode surface. The explanation was confirmed with conductive atomic force microscopy.

"Our findings offer insights into how memory cells of the new type could be greatly improved. Thicker ruthenium films used as electrodes have rougher surfaces. This in turn gives rise to areas of locally enhanced electric field on the slopes of the grains that boost the key performance characteristics of the device. We believe that our investigation will help to create more efficient and reliable memory devices in the future," adds study co-author Andrey Markeev, who leads the ALD group at MIPT.